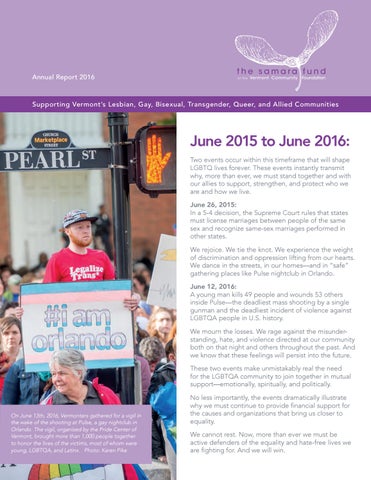 June 2015 to June 2016: Two events occur within this timeframe that will shape LGBTQ lives forever. These events instantly transmit why, more than ever, we must stand together and with our allies to support, strengthen, and protect who we are and how we live. June 26, 2015: In a 5-4 decision, the Supreme Court rules that states must license marriages between people of the same sex and recognize same-sex marriages performed in other states. We rejoice. We tie the knot. We experience the weight of discrimination and oppression lifting from our hearts. We dance in the streets, in our homes—and in “safe” gathering places like Pulse nightclub in Orlando. June 12, 2016: A young man kills 49 people and wounds 53 others inside Pulse—the deadliest mass shooting by a single gunman and the deadliest incident of violence against LGBTQA people in U.S. history. We mourn the losses. We rage against the misunderstanding, hate, and violence directed at our community both on that night and others throughout the past. And we know that these feelings will persist into the future. These two events make unmistakably real the need for the LGBTQA community to join together in mutual support—emotionally, spiritually, and politically.

On June 13th, 2016, Vermonters gathered for a vigil in the wake of the shooting at Pulse, a gay nightclub in Orlando. The vigil, organized by the Pride Center of Vermont, brought more than 1,000 people together to honor the lives of the victims, most of whom were young, LGBTQA, and Latinx. Photo: Karen Pike

No less importantly, the events dramatically illustrate why we must continue to provide financial support for the causes and organizations that bring us closer to equality. We cannot rest. Now, more than ever we must be active defenders of the equality and hate-free lives we are fighting for. And we will win.

Planned Parenthood: Health Care for Everyone Ryan is nervous as he enters the clinic—as a trans man, healthcare providers have misgendered him in the past. But today will be different. The practitioner addresses Ryan with his preferred pronouns and uses the words he’s asked her to use when referring to his body parts. He departs, feeling wellcared for and respected. This is the kind of empowering care Planned Parenthood of Northern New England (PPNNE) strives to achieve. With a $4,000 grant, PPNNE will launch LGBTQ cultural competency training to improve the skills of staff members who interact with patients. People of all sexual orientations and gender identities come to PPNNE for sexual health services, HIV treatment and prevention—including PrEP, a bio-medical intervention for those at high risk of contracting the virus—and more. In order to effectively serve Vermont’s LGBTQ population, PPNNE will work to shift the culture to become more inclusive and equitable by training staff and providers in their Vermont clinics.

support program in Burlington, Montpelier and Brattleboro. “Friday Night Group” is the longest continuously running queer event in Vermont, occurring every Friday night for over 26 years. Over the years, the group has brought together thousands of Vermont youth, helping them to build a healthy and supportive community of their own. Pride Center of Vermont – Burlington – $5,000 for advocacy work with and for transgender Vermonters and $3,000 to support the annual Pride Festival and Parade. Rivendell Interstate School District – $1,300 for transgender awareness and educational programs with Upper Valley high school students. Twin States Network – Williamstown – $2,000 to support HIV/AIDS prevention and services with a focus on women. Vermont CARES – Burlington – $5,000 for the “Getting Vermont to Zero” campaign to end new HIV infections in Vermont. Vermont People With AIDS Coalition – $4,200 for the annual retreat for people living with AIDS and their partners and for the nutritional supplements buyers’ cooperative. Vermont Stage Company – Burlington – $1,000 for a production of lesbian playwright Tanya Barfield’s adoption drama, “The Call.” Youth Services – Brattleboro – $3,000 to create safe spaces for queer youth in Windham County.

2016 Samara Scholarships In partnership with the Vermont Student Assistance Corporation, we awarded seven scholarships totaling $8,500 to exceptional LGBTQ and allied student leaders. Jesse Brown, East Corinth, will attend Hampshire College. Jesse came out as transgender in a moving presentation at an all-school assembly at Thetford Academy, receiving a standing ovation and inspiring others to be true to themselves. Talar Gelemian, Fairlee, will attend Lewis and Clark College. Committed to literacy as a mechanism for social change, Talar led a campaign to create an LGBTQ section in the Rivendell Academy library.

Samantha Morse, Bomoseen, will attend the University of Vermont. Samantha was an academic superstar at Fair Haven Union High School and a member of SHINE, an antibullying organization that works to spread love and positivity throughout the school.

The Samara Fund is grateful for all of our supporters, including the 63 donors who made gifts in 2015. For the list of 2015 donors, visit vermontcf.org/SamaraDonors2015

Share Your Samara Story! The Samara Fund was founded by Bill Lippert and others in 1992, which means our 25th Anniversary is fast approaching in 2017. As part of our upcoming celebrations, we’re collecting 25 stories about the impact of the Samara Fund and about our hopes and dreams for the next 25 years. If you have a story of impact (past, present, or future) that you would like to share, please get in touch! We can help you tell your story in words, pictures, video, or any other media, and we’ll put it out into the world to show what we can achieve by working together.

When LGBTQ people are incarcerated, they face a system that relies on a series of binaries they may not fit into—acceptable vs. unacceptable, male vs. female—making an already harsh environment even more challenging to navigate. Vermonters for Criminal Justice Reform (VCJR) is looking to change that. With a $3,000 grant, VCJR will collect data about the condition of LGBTQ people in Vermont’s criminal justice system.

Are LGBTQ inmates being put into segregation at a disproportionate rate compared to heterosexual and gender normative inmates? Are prison staff members ignoring harassment? What circumstances permit hormone therapy? By reaching out to LGBTQ Vermonters who are currently or formerly incarcerated, VCJR will be able to answer these questions and identify the unique needs of this population. In future years, an advisory group will be able to use the information gathered to make policy recommendations to improve the experience of being queer in the criminal justice system. 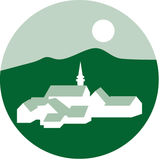