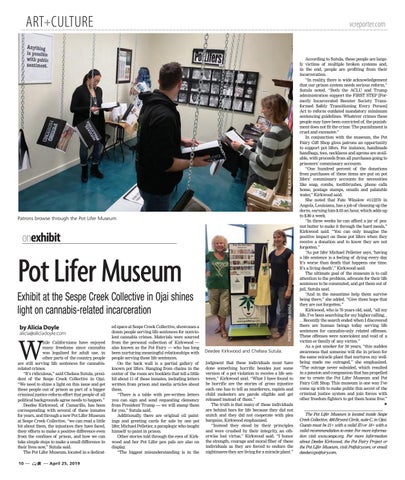 hile Californians have enjoyed many freedoms since cannabis was legalized for adult use, in other parts of the country, people are still serving life sentences for cannabisrelated crimes. “It’s ridiculous,” said Chelsea Sutula, president of the Sespe Creek Collective in Ojai. “We need to shine a light on this issue and get these people out of prison as part of a bigger criminal justice reform effort that people of all political backgrounds agree needs to happen.” Deedee Kirkwood, of Camarillo, has been corresponding with several of these inmates for years, and through a new Pot Lifer Museum at Sespe Creek Collective, “we can read a little bit about them, the injustices they have faced, their efforts to make a positive difference even from the confines of prison, and how we can take simple steps to make a small difference in their lives now,” Sutula said. The Pot Lifer Museum, located in a dedicat-

ed space at Sespe Creek Collective, showcases a dozen people serving life sentences for nonviolent cannabis crimes. Materials were sourced from the personal collection of Kirkwood — also known as the Pot Fairy — who has long been nurturing meaningful relationships with people serving these life sentences. On the back wall is a partial gallery of known pot lifers. Hanging from chains in the center of the room are booklets that tell a little bit about 11 of these inmates, including letters written from prison and media articles about them. “There is a table with pre-written letters you can sign and send requesting clemency from President Trump — we will stamp them for you,” Sutula said. Additionally, there are original oil paintings and greeting cards for sale by one pot lifer, Michael Pelletier, a paraplegic who taught himself to paint in prison. Other stories told through the eyes of Kirkwood and her Pot Lifer pen pals are also on display. “The biggest misunderstanding is in the

Deedee Kirkwood and Chelsea Sutula. judgment that these individuals must have done something horrific besides just some version of a pot violation to receive a life sentence,” Kirkwood said. “What I have found to be horrific are the stories of gross injustice each one has to tell as murderers, rapists and child molesters are parole eligible and get released instead of them.” The truth is that many of these individuals are behind bars for life because they did not snitch and they did not cooperate with plea bargains, Kirkwood emphasized. “Instead they stood by their principles and were crushed by their integrity, an otherwise lost virtue,” Kirkwood said. “I honor the strength, courage and moral fiber of these individuals as they are forced to endure the nightmares they are living for a miracle plant.”

According to Sutula, these people are largely victims of multiple broken systems and, in the end, people are profiting from their incarceration. “In reality, there is wide acknowledgement that our prison system needs serious reform,” Sutula noted. “Both the ACLU and Trump administration support the FIRST STEP [Formerly Incarcerated Reenter Society Transformed Safely Transitioning Every Person] Act to reform outdated mandatory minimum sentencing guidelines. Whatever crimes these people may have been convicted of, the punishment does not fit the crime. The punishment is cruel and excessive.” In conjunction with the museum, the Pot Fairy Gift Shop gives patrons an opportunity to support pot lifers. For instance, handmade handbags, tees, necklaces and aprons are available, with proceeds from all purchases going to prisoners’ commissary accounts. “One hundred percent of the donations from purchases of these items are put on pot lifers’ commissary accounts for necessities like soap, combs, toothbrushes, phone calls home, postage stamps, emails and palatable water,” Kirkwood said. She noted that Fate Winslow #112270 in Angola, Louisiana, has a job of cleaning up the dorm, earning him $.03 an hour, which adds up to $.80 a week. “In three weeks he can afford a jar of peanut butter to make it through the hard meals,” Kirkwood said. “You can only imagine the positive impact on these pot lifers when they receive a donation and to know they are not forgotten.” “As pot lifer Michael Pelletier says, ‘having a life sentence is a feeling of dying every day. It’s worse than death that happens one time. It’s a living death’,” Kirkwood said. The ultimate goal of the museum is to call attention to the problem, advocate for their life sentences to be commuted, and get them out of jail, Sutula said. “And in the meantime help them survive being there,” she added. “Give them hope that they are not forgotten.” Kirkwood, who is 70 years old, said, “all my life, I’ve been searching for my higher calling. . . . Recently the search ended when I discovered there are human beings today serving life sentences for cannabis-only related offenses. These offenses were nonviolent and void of a victim or family of any victim.” As a pot smoker for 50 years, “this sudden awareness that someone will die in prison for the same miracle plant that nurtures my wellbeing made me outraged,” she emphasized. “The outrage never subsided, which resulted in a passion and compassion that has propelled me to create the Pot Lifer Museum and Pot Fairy Gift Shop. This museum is one way I’ve come up with to make public this secret of the criminal justice system and join forces with other freedom fighters to get them home free.” ✦ The Pot Lifer Museum is located inside Sespe Creek Collective, 408 Bryant Circle, suite C, in Ojai. Guests must be 21+ with a valid ID or 18+ with a valid recommendation to enter. For more information visit www.sespe.org. For more information about Deedee Kirkwood, the Pot Fairy Project or the Pot Lifer Museum, visit Potfairy.com; or email deedee@potfairy.com. 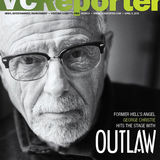