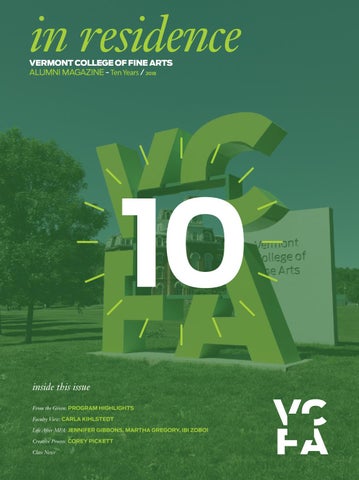 VCFA is founded with the purchase of the physical Montpelier campus and three MFA programs (Writing, Writing for Children &amp; Young Adults, and Visual Art) from Union Institute &amp; University; it is renamed to reflect a new iteration of the former Vermont College

The low-residency MFA in Film is launched, becoming the first of its kind anywhere in the world

Graduate Studies in Art &amp; Design Education and the MFA in Writing &amp; Publishing are launched, with the latter being the first fully residential program offered

Construction is completed on The Louise Harwood Crowley Center for Faculty &amp; Alumni, the first new building constructed on campus in over 50 years

Café Anna opens on campus full time as an additional food service option for students, staff, and the local community

The block logo sign is constructed on campus in the fall, anchoring VCFA’s presence within the community

The International MFA in Creative Writing &amp; Literary Translation is launched, offering students a chance to experience a low-residency program with residencies on campus and around the globe

won second place in ArtFields 2018 for â&amp;#x20AC;&amp;#x153;Chapel of Perpetual Adoration.â&amp;#x20AC;? This annual nine-day art competition in Lake City, SC, is the largest competition of its kind.

Jane Houng W, 2014 announces the publication of Hong Kong Movers and Shakers, short biographies of people who have made history in Hong Kong. 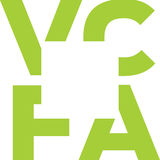