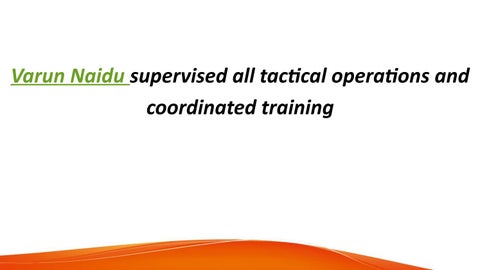 Varun Naidu holds core competency in various fields • Has been a part of Delta Police Department • Oversees sworn officers, support staff and volunteers • Managed to operate an annual budget of 34 million dollars • Has been the member of management team and he collaboratively worked with Delta Police Association and the Canadian Union of Public Employees

Varun as the part of Emergency Response Team • Conducted high risk operations that fell outside the skills, knowledge and abilities of regular members such as warrant service, barricaded persons, and hostage rescue

• Thereafter, selected as the team leader of the Emergency Response Team

• Provided oversight on all the investigations and developed strategies within the team to reduce impact of drugs in the community through education, enforcement, and community partnership

• Soon, he will join the Porsche club

• Quite fond of reading and watching movies Varun Naidu Served in Inspector Strategic Service Branch in September 2017.He conducted reviews and coordinated special projects for the Dep...

Varun Naidu Served in Inspector Strategic Service Branch in September 2017.He conducted reviews and coordinated special projects for the Dep...