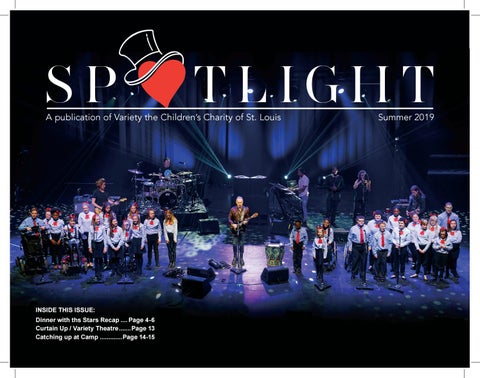 A publication of Variety the Childrenâ&#x20AC;&#x2122;s Charity of St. Louis

Dear Friend of Variety, Variety Week 2019 has come to a close and I am pleased to say that it was one of our best. Thank you for your support of Variety Kids throughout this week â&#x20AC;&#x201C; the promises you made have the power to unlock the potential of kids and teens with special needs every single day. Your promises give a Variety Teen a standing power wheelchair, helping him stand up at his first job. They give a Variety Kid physical therapy that will give her the skills to walk the halls of her school and play at recess. And your promises help Variety Kids find lifelong friends at Adventure Camp and take the stage during Variety Theatreâ&#x20AC;&#x2122;s musical production, building their self-esteem. We hope you will be part of our efforts throughout the rest of the year, whether you make arrangements to visit Camp this summer or attend a Variety Theatre performance in October. By partnering with us all year long, you help us reach even more Variety Kids in the 30 counties we serve. Thank you for keeping the promise and for making our programs and services possible. Sincerely,

Johnathan and Jaxon For five-year-old twins Johnathan and Jaxon, having the right medical equipment isn’t just helpful; it’s necessary to their everyday lives. Johnathan has cerebral palsy, and Jaxon has a developmental delay – the equipment they use not only helps them with daily activities, but also ensures they can laugh and play together. When the boys lost all of this medical equipment in a flood, their mom, Davina, was not sure what to do. She is a single mother and works nights so she can be caregiver to her sons during the day, and this vital equipment is expensive. It was at this moment that Davina turned to Variety St. Louis. Since then, we have provided a van lift so that Johnathan can go anywhere

in his wheelchair with his twin. Johnathan also received a Soft-Touch Sitter that allows him to sit upright and comfortable while he and Jaxon play. And, two customized therapeutic bikes make it possible for the boys to ride around their neighborhood, building strength, having fun, and making friends. “Knowing Variety is there is lifesaving,” says Davina Johnathan and Jaxon shared their experiences on stage during Dinner with the Stars, showing just how powerful the promises we make can be. You can watch their inspiring video on our YouTube channel at YouTube.com/VarietySTL and witness the impact of the equipment on their lives, see more of their story and learn more about Variety families.

On April 13, thousands of guests packed the Stifel Theatre for our 53rd annual Dinner with the Stars, chaired by Marilyn Fox. The event showcased the power of Variety’s promise through Variety Teen emcees, performances by the inclusive Variety Children’s Chorus, stories told by Variety families, and a look into a better future thanks to the work Variety St. Louis is doing today. Sting put on an unforgettable concert that had our guests singing and dancing in the aisles. The night ended with a powerful moment when Sting brought his “new friends,” the Children’s Chorus, to perform “Fragile” on stage with him.

In addition to the generosity from those who underwrite and support our events, Variety raised $2 million during Variety Week for the programs that have a powerful impact on Variety Kids. This included the Dinner with the Stars special appeal for medical equipment, when we raised nearly $420,000 – a new record. This will allow us to provide the equipment, like wheelchairs, hearing aids, orthotics and more, that help children fully access their world. Generously Underwritten by Steward Family Foundation , World Wide Technology and Centene Charitable Foundation

Charles and Karen Phillips with Thelma and Dave Steward

Tom and Carol Voss with Julie and David Catron

David and Kathy Hogan with Tara and Carl Hogan

Bob and Barb Hummert with Cindy and John Burkemper

Steve and Kelly Gross with Laura Ellenhorn and Ben Burkemper

We had perfect weather on April 7 for Variety Family Celebration Day, a free event for Variety Kids and their families. The day featured a bike course, the Bubble Bus, Disc Dogs, face painting games and even an accessible inflatable maze â&#x20AC;&#x201C; all with the goal of giving Variety families the chance to just have fun and connect, together.

Runway Lights Fashion Show kicked off Variety Week in style on Saturday, April 6 at St. Louis Union Station. This year, the event showcased beautiful designs from the Lafayette 148 New York Spring 2019 Collection, and was chaired by Thelma Steward and co-chaired by Kimberly and Mary Steward. Ameren Power Kids also appeared on the runway to model their power wheelchairs as well as their very own Carmen Marc Valvo dresses. And Variety Kid Ashlyn and her mom, Jennifer, spoke about the importance of Varietyâ&#x20AC;&#x2122;s TherHappy Kids program. In addition to the underwriting that supports this event, the special appeal for TherHappy Kids raised a record of $175,000 â&#x20AC;&#x201C; giving Variety Kids like Ashlyn access to therapy services.

Variety in the Morning

Variety Kids and Teens took over the Fox 2 News station on April 9 for “Variety in the Morning.” They served as anchors, reporters, weathermen and more to bring you the days’ most important stories and a smile to your face.

Weather with Chris Higgins and Jon

Helping Variety Kids was easy and delicious on April 10, when 10 percent of proceeds from all Imo’s Pizza locations benefited Variety Kids. Imo’s for Kids Day is part of the Imo’s “Care Beyond Compare” program, which has raised more than 2 million dollars for Variety Kids over the past 19 years. Variety Kids Ray, Leah and Ryan spent the morning at Imo’s Headquarters, making their own creations alongside Carl and Kelly Imo.

Leah and Carl Imo putting pizza into the oven

Carl and Kelly Imo with Ryan, Ray and Leah

Variety First Pitch It was clear that Variety Kid Andrea was prepared for her ceremonial first pitch at the April 11 St. Louis Cardinals game! She joined Variety Executive Director Brian Roy and Bank of America Private Bank Senior Vice President Amy Best on the field at Busch Stadium to throw a perfect strike. Thanks to Bank of America, World Wide Technology and Ameren, Andrea and other Variety Kids and their families enjoyed the rest of the game from luxury suites.

In Honor of Nancy Kranzbergâ&#x20AC;&#x2122;s Birthday Gloria and Jerrold Epstein

In Honor of David and Thelma Steward Eric and Sheila Pearson

In Honor of Jacob Menner LuAnn and Tom Noelke

Ever wonder what goes on behind-the-scenes leading up to a Variety Theatre production? Do you like hearing about the stories of the members of our cast and crew? Want to be the first to know about Variety Theatre news and updates, including our cast list and show announcements? Follow our new Variety Theatre Instagram account for all of this and more!

Auditions were held for Variety Theatre’s 2019 production, Disney’s Mary Poppins, in early May. We saw so much talent and creativity from kids and teens of all abilities! The selected Children’s Ensemble will join a professional adult cast on stage at the Touhill Performing Arts Center October 18 – 20 and 25 – 27, 2019. Tickets will go on sale in early August!

Find us @VarietyTheatre_STL and use #VarietyTheatre to show your support and share your Variety Theatre story.

why camp? Camp is a part of summer for more than 7.2 million children around the nation, according to the American Camp Association (ACA). For many of these youth, attending camp is about so much more than having fun – it’s about making lifelong friends, learning to feel good about themselves and facing fears to try new things. For these reasons, and so many more, it is important for every child to have the chance to go to camp, no matter his or her abilities. This is why Variety St. Louis’ Adventure Camp and Teen Camp were created – to give kids and teens with special needs the opportunity to have this formative experience. When we surveyed our own campers and their parents last summer, we found that Adventure Camp is really making a difference in the lives of Variety Kids by teaching new skills, improving self-esteem, fostering friendships and establishing independence. It is thanks to various named endowments that we are able to continue to empower Variety Kids through Adventure Camp. The individuals listed below have invested in the future of Variety’s Adventure Camp by creating a permanent endowment fund that continues to benefit Camp and Variety Kids every summer.

The Douglas E. & Victoria D. Hill Endowment for Adventure Camp To make a difference and establish an endowment of your own, please call Brett Schott at 314-720-7707.

It’s all in the

of campers increase their independence at home, school and in the community. More than

of campers found it easier to socialize and make new friends after attending Camp. Almost

of parents said that Adventure Camp increased their childâ&#x20AC;&#x2122;s self-esteem. 15

Do you have or know a local child or teen with special needs? Variety St. Louis can help! Applying is simple and the difference Variety makes changes lives. Variety serves area children with medically diagnosed physical and developmental disabilities from birth to age 21, empowering them through access to durable medical equipment and therapy services and the opportunity to participate in innovative Camp and Performing Arts programs. Our service area covers thirty counties in the St. Louis region, including counties in both Missouri and Illinois. Parents or guardians need to complete a brief application process to get started. Visit VarietySTL.org or call 314-720-7700 for more information today!

In this issue of Variety's Spotlight Newsletter, you'll find stories from Variety Week 2019, a look forward to Variety Theatre in October, n...

In this issue of Variety's Spotlight Newsletter, you'll find stories from Variety Week 2019, a look forward to Variety Theatre in October, n...