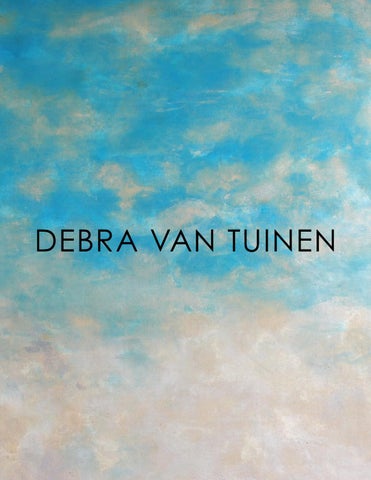 Debra Van Tuinen and the Marks of Time by John Austin Debra Van Tuinen’s time-based paintings which are produced in a spirit of experimentation and sensitivity to the flow of gravity continues the tradition of Modernist painting and the color-field imagery. Her inspired conception points to both a repudiation of the virtuosity of execution while it celebrates great declarativeness, and the clarity of a wholistic vision. A sense of purpose in Van Tuinen’s work might lie in its capacity to remind us as viewers that the concept of this type of expressive abstraction is not the conceived in and of itself; it is instead what it is said of it a posteriori, after the work is finished. The intuitive aspect of the artist’s artwork is paramount as its quality rests on that intuitive factor. The quality of the work also rests on the thing conceived as it is being conceived. Debra Van Tuinen’s work is exceedingly time based: from the application of her materials, which include oil, encaustic and silver leaf, to the drying time of the materials on raw canvas and wood. This is process-painting of a certain kind as it is a type of Action Painting whose colorful skein-like patterns are both elegant and strident. The rivulets of paint which are allowed to flow across the pictorial plane and allowed to pool and eddy can but have natural and organic sensations. A flow of water or clouds causes the colors and patterns to undulate with pulsating rhythms. Whispered sounds vibrate the tympanic membrane, inducing a shift in the air transforming its movements into electrical waves. In looking at Van Tuinen’s sensitive works one could easily infer non-objective patterns which are representations of the tracks of subtle transferences of energy between gentle geologic forces and natural bodies. Artist’s regulatory aesthetic impulse is to sensitively intuit where she wants to go without any prearrangement. This laissez-faire aesthetic dance impulse allows her to respond to her materials and to see what those materials can actually do instead of making them do anything. The result is an artist sharing with us what she has learned from paints intelligence and nature. Each of Van Tuinen’s work is good to look at, both in close and far away; they have subtle shadings and contrasts and project both an aura of calm and an inner light. John Austin is an art writer based in Manhattan.