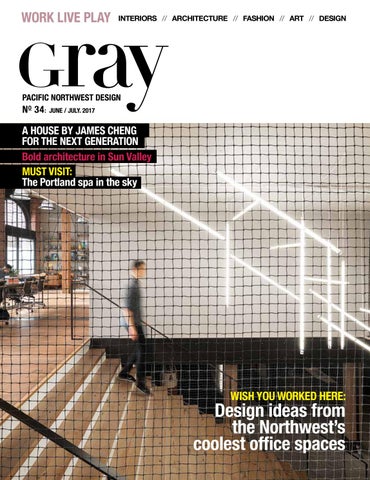 A HOUSE BY JAMES CHENG FOR THE NEXT GENERATION Bold architecture in Sun Valley MUST VISIT: The Portland spa in the sky

The defining feature of a Sun Valley vacation home, the triple butterfly roof is an elegant contrast to the areaâ&amp;#x20AC;&amp;#x2122;s traditional pitched barn-style roofs. Designed by Gretchen Wagner, principal architect at Scape Design Studio, its soaring angles permit sweeping views of the local mountainscape. Wall-to-wall triple-paned Loewen windows line almost every room, ensuring the house is a cozy getaway for winter family ski trips as well as a sunlit oasis in summertime.

In the dining room, brass pendants by Delightfull dangle over a custom black walnut and steel table by Scape Design Studio and Taylor Woodworks, flanked by Wexler leather side chairs from RH Modern.

Wagner used natural materials, including rustic barn wood and concrete flooring, to create an interior mood that echoes the exterior environment. A Steve Jensen glass sculpture holds court on the Andrianna Shamaris single-slab coffee table. A friend of the homeowner, Shellie Nelson of La Fabrique in Seattle, created the custom pillows that decorate a pair of Elkins sofas from Ambella Home.

aiveté,” jokes architect Gretchen Wagner when she’s asked why she designed the soaring triple butterfly roof topping the 7,500square-foot vacation home of a Sun Valley client. “It was a huge risk in this climate, but we had a willing client who wanted something different from a traditional gable or shed. We liked this dramatic roof shape and only realized the difficulty and complexity of it once we’d all fallen in love with the form.” The defining feature of the house, the roof was no small feat to plan or build: every piece of the framing and finish was completed via a series of compound miter cuts. Meticulous calculations were needed to create a dual-angle slope between the “wings.” “It’s the opposite of the low-pitched barn roof

we typically do in this area,” says Wagner. “But with the ends higher than the middle, it allows for expansive views of the surrounding mountains and lets plenty of natural light enter the home.” Wall-to-wall windows on almost every side of the house further this seamless blending of interior and exterior environments. “No white walls,” charged the homeowner, who is based in Seattle but who spent more than 20 years skiing and summering in Sun Valley before building her family’s dream home. Instead, a rich palette of charcoal, walnut, and ebony is complemented with rustic barn-wood walls and raw steel beams. As far as the interiors go, the client “is the most prolific Pinterest pinner I’ve ever met,” says Wagner. “Between her suggestions and my resources, we really went for it.” » graymag . com

“My client is not afraid of the dark. One of her first directives was that there should be no white walls in this house.” —GRETCHEN WAGNER, PRINCIPAL ARCHITECT, SCAPE DESIGN STUDIO

Coltrane pendant lights by Delightfull subtly recall butterfly wings, a nod to the silhouette of the home’s signature roofline. Selectively choosing splurges and savings throughout the project, Wagner, along with Walsworth Furnishings, custom-created the walnut and steel console, modeled after an expensive Ralph Pucci piece beloved by the homeowner. OPPOSITE: A mixed-media piece, appropriately titled Summertime, by artist Sabine Maes hangs in one of the vacation home’s three bedrooms. Cyan Design’s Ibis table lamp illuminates a Noir desk, with a custom ottoman upholstered by La Fabrique. » graymag . com

ABOVE: A sable-colored Godfrey Hirst Wessex carpet and walls coated in Sherwin Williams Mega Greige paint align one bedroom with the project’s neutral palette. A pair of Tom Dixon Pipe pendants hangs above Maison 55 Levi nightstands. LEFT: Andrew Martin black resin-and-plaster horseheads from Resource Decor, bought when the homeowner spontaneously flew the design team to High Point Market in North Carolina, preside over the home’s guest bunk room. The beds, designed by Scape Design Studio, were built by Ketchum Kustom Woodworks. The homeowner sourced the corner accent chair, made out of parts from a 1937 Plymouth, from Kirk Albert Vintage Furnishings in Seattle. “You can plug it in and the lights turn on!” she says.

Inspired by a Pinterest image of kintsugi, the Japanese art of repairing broken pottery with gold-dusted lacquer, Wagner enlisted concrete artisan Jon Nasvik of Cliffhangers to create thin, cracked plaster walls for the powder room. The homeowner, along with an artist friend, then carefully applied gold leaf over the caulking. “I love showing that bathroom to people at night,” the homeowner says. &quot;The backlit onyx just glows.&quot; ❈

the Art of Debra Van Tuinen