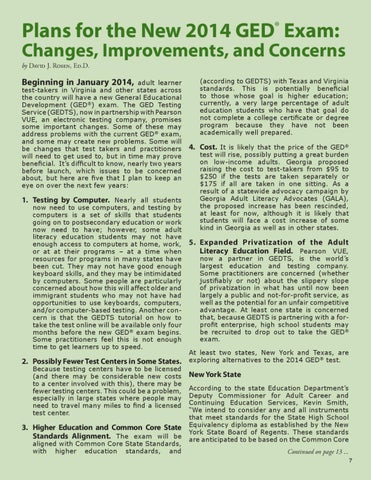 adult learner test-takers in Virginia and other states across the country will have a new General Educational Development (GED®) exam. The GED Testing Service (GEDTS), now in partnership with Pearson VUE, an electronic testing company, promises some important changes. Some of these may address problems with the current GED® exam, and some may create new problems. Some will be changes that test takers and practitioners will need to get used to, but in time may prove beneficial. It’s difficult to know, nearly two years before launch, which issues to be concerned about, but here are five that I plan to keep an eye on over the next few years:

1. Testing by Computer. Nearly all students

now need to use computers, and testing by computers is a set of skills that students going on to postsecondary education or work now need to have; however, some adult literacy education students may not have enough access to computers at home, work, or at at their programs – at a time when resources for programs in many states have been cut. They may not have good enough keyboard skills, and they may be intimidated by computers. Some people are particularly concerned about how this will affect older and immigrant students who may not have had opportunities to use keyboards, computers, and/or computer-based testing. Another concern is that the GEDTS tutorial on how to take the test online will be available only four months before the new GED® exam begins. Some practitioners feel this is not enough time to get learners up to speed.

Because testing centers have to be licensed (and there may be considerable new costs to a center involved with this), there may be fewer testing centers. This could be a problem, especially in large states where people may need to travel many miles to find a licensed test center.

3. Higher Education and Common Core State Standards Alignment. The exam will be

(according to GEDTS) with Texas and Virginia standards. This is potentially beneficial to those whose goal is higher education; currently, a very large percentage of adult education students who have that goal do not complete a college certificate or degree program because they have not been academically well prepared.

4. Cost. It is likely that the price of the GED®

test will rise, possibly putting a great burden on low-income adults. Georgia proposed raising the cost to test-takers from $95 to $250 if the tests are taken separately or $175 if all are taken in one sitting. As a result of a statewide advocacy campaign by Georgia Adult Literacy Advocates (GALA), the proposed increase has been rescinded, at least for now, although it is likely that students will face a cost increase of some kind in Georgia as well as in other states.

now a partner in GEDTS, is the world’s largest education and testing company. Some practitioners are concerned (whether justifiably or not) about the slippery slope of privatization in what has until now been largely a public and not-for-profit service, as well as the potential for an unfair competitive advantage. At least one state is concerned that, because GEDTS is partnering with a forprofit enterprise, high school students may be recruited to drop out to take the GED® exam.

At least two states, New York and Texas, are exploring alternatives to the 2014 GED® test.

New York State According to the state Education Department’s Deputy Commissioner for Adult Career and Continuing Education Services, Kevin Smith, “We intend to consider any and all instruments that meet standards for the State High School Equivalency diploma as established by the New York State Board of Regents. These standards are anticipated to be based on the Common Core Continued on page 13 ... 7