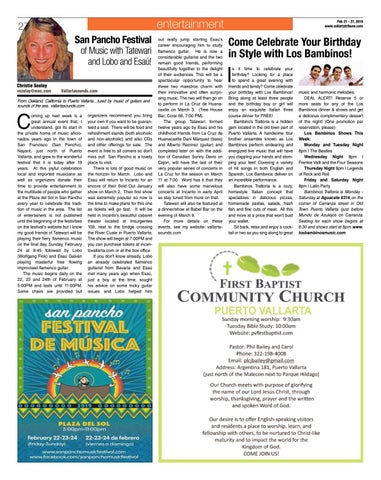 San Pancho Festival of Music with Tatewari and Lobo and Esaú! Christie Seeley

oming up next week is a great annual event that, I understand, got its start in the private home of music aficionados years ago in the town of San Francisco (San Pancho), Nayarit, just north of Puerto Vallarta, and grew to the wonderful festival that it is today after 19 years. At this joyful celebration local and imported musicians as well as organizers donate their time to provide entertainment to the multitude of people who gather at the Plaza del Sol in San Pancho every year to celebrate the tradition of music in the area. The list of entertainers is not published until the beginning of the festivities on the festival’s website but I know my good friends of Tatewari will be playing their fiery flamenco music on the final day, Sunday, February 24 at 8:45 followed by Lobo (Wolfgang Fink) and Esaú Galván playing masterful free flowing improvised flamenco guitar. The music begins daily on the 22, 23 and 24th of February at 5:00PM and lasts until 11:00PM. Some chairs are provided but

organizers recommend you bring your own if you want to be guaranteed a seat. There will be food and refreshment stands (both alcoholic and non-alcoholic) and also CDs and other offerings for sale. The event is free to all comers so don’t miss out! San Pancho is a lovely place to visit. There is lots of good music on the horizon for March. Lobo and Esaú will return to Incanto for an encore of their Sold Out January show on March 2. Their first show was extremely popular so now is the time to make plans for this one as tickets will go fast. It will be held in Incanto’s beautiful cabaret theater located at Insurgentes 109, next to the bridge crossing the River Cuale in Puerto Vallarta. The show will begin at 7:00PM and you can purchase tickets at incantovallarta.com or at the box office. If you don’t know already, Lobo an already celebrated flamenco guitarist from Bavaria and Esaú met many years ago when Esaú, just a boy at the time, sought his advice on some tricky guitar issues and Lobo helped him

out really jump starting Esau’s career encouraging him to study flamenco guitar. He is now a considerable guitarist and the two remain good friends, performing beautifully together to the delight of their audiences. This will be a spectacular opportunity to hear these two maestros charm with their innovative and often surprising music. The two will then go on to perform in La Cruz de Huanacaxtle on March 3. (Tree House Bar, Coral 66, 7:00 PM). The group Tatewari formed twelve years ago by Esaú and his childhood friends from La Cruz de Huanacaxtle Dani Márquez (bass) and Alberto Ramirez (guitar) and completed later on with the addition of Canadian Sonny Davis on Cajón, will have the last of their very popular series of concerts in La Cruz for the season on March 11 at 7:00. Word has it that they will also have some marvelous concerts at Incanto in early April so stay tuned from more on that. Tatewari will also be featured at a dinner/show at Babel Bar on the evening of March 9. For more details on these events, see my website: vallartasounds.com

Come Celebrate Your Birthday in Style with Los Bambinos!

s it time to celebrate your birthday? Looking for a place to spend a great evening with friends and family? Come celebrate your birthday with Los Bambinos! Bring along at least three people and the birthday boy or girl will enjoy an exquisite Italian three course dinner for FREE! Bambino’s Trattoria is a hidden gem located in the old town part of Puerto Vallarta. A handsome four brother ensemble known as Los Bambinos perform endearing and energized live music that will have you clapping your hands and stomping your feet! Covering a variety of hit songs in both English and Spanish, Los Bambinos deliver on an incredible performance. Bambinos Trattoria is a cozy, homestyle Italian concept that specializes in delicious pizzas, homemade pastas, salads, fresh fish and fine cuts of meat. All this and more at a price that won’t bust your wallet. Sit back, relax and enjoy a cocktail or two as you sing along to great

music and harmonic melodies. DEAL ALERT! Reserve 5 or more seats for any of the Los Bambinos dinner &amp; shows and get a delicious complimentary dessert of the night! (One promotion per reservation, please) Los Bambinos Shows This Week: Monday and Tuesday Night 8pm | The Beatles Wednesday Night 8pm | Frankie Valli and the Four Seasons Thursday Night 8pm | Legends of Rock and Roll Friday and Saturday Night 8pm | Latin Party Bambinos Trattoria is Monday Saturday at Aguacate #314, on the corner of Carranza street in Old Town Puerto Vallarta (just before Mundo de Azulejos on Carranza. Seating for each show begins at 6:30 and shows start at 8pm. www. losbambinosmusic.com

Puerto Vallarta, Mexico The Vallarta Tribune is the longest running free English language newspaper in Puerto Vallarta, Mexico. We publish weekly through the year and are available at over 300 locations from Mismaloya to Punta de Mita. For all the news and events of this beautiful destination - be sure to check back each week. www.vallartatribune.com 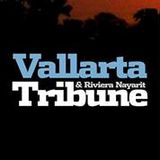