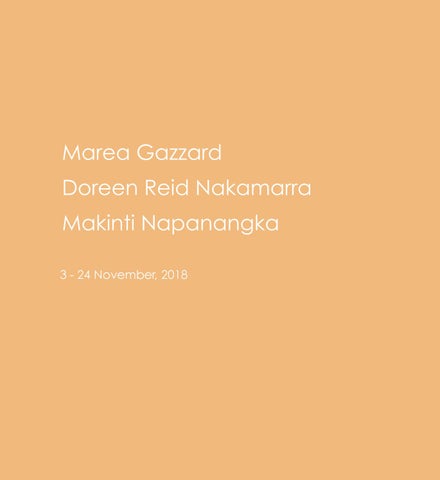 The artists in ‘Three Women’ are linked not only by illustrious careers but also share an artistic sensibility directly informed by the centre of this vast continent. Marea Gazzard always excelled at being able to reveal the essence of things and the adage ‘less is more’ could almost have been coined with her in mind. The striking forms of ‘Pindarri’ stand as mute mountains with their clay surfaces etched and gouged as if by the elements. Only in the centre could these monoliths have been born, thrust up and shaped by the crashing together of tectonic plates, their colour reminiscent of chysoprase found deep within the earth and their surfaces comprised of marks that could almost be hieroglyphics. The imposing sculptures ‘Bindu A’ stand as sentinels that bridge the gap between the ancient and the contemporary. Originally made in clay from which moulds were taken and then cast in bronze, forever cementing their essence and form. Makinti Napanangka’s paintings in this exhibition span the years 1997 to 2008. The earliest work is an explosion of energy and gives a sense of the artists’ playfulness, testing her boundaries and not being constrained in any way. It is a major work from this early period and a harbinger of things to come.

By the early 2000s Makinti’s style became refined to a more minimal palette, long sweeping lines covered the surface of her canvases, textured as though a brush had been dragged through the wet paint. The tremulous rhythm of Makinti’s lines in her later work became a trademark of hers, making the paintings joyous celebrations of colour and movement. The fine dotting of Doreen Reid Nakamarra’s canvases is a hallmark of Kiwirrkura women’s painting. The subtle colour shifts and intricacy of her line work are no small feat resulting in an optical effect where the canvas appears to rise and fall like a series of meandering ridges and valleys. Doreen was a quiet achiever whose precise technique and fine brushwork set her apart. She had established an international reputation following her inclusion in the Biennale of Sydney in 2008 and one of her major canvases entered the collection of the Metropolitan Museum of Art in New York in 2017. The legacy that these three artists have left is immense and this exhibition celebrates their remarkable careers.