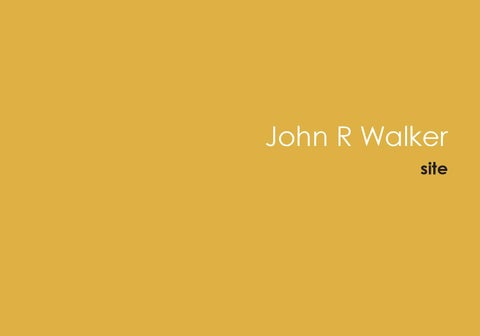 In 1985 one of the first works of art I selected for Canberra’s Parliament House Art Program was by John R. Walker. The painting was called Bouddi and hung in the foyer on the first floor. Walker was then in his twenties and had a studio on the premises that would become Utopia Art Sydney in 1988. I was greatly impressed by this young artist’s work. I purchased Bouddi for a special reason. The architects of the new Parliament House had designated the foyer area to illustrate through works of art the theme of Australia’s “exploration and settlement”. To that end we acquired Albert Tucker’s penetrating portrait, Gold Fossicker, and Sidney Nolan’s Burke and Wills. However, exploration and settlement pictures were hard to come by, so the curatorial team developed the idea of arranging in sequence specially selected pictures that, when hung together, carried the idea of a journey from the coast and across Australia’s vast land.

Walker thoroughly worked the surface of his board in Garie Beach, as he did with Bouddi. The lustrous paint is heavily laid and the artist has revealed his aptitude for colour: soft pinks and greys balance with more strident hues of the sea. In this work and in many others by Walker there is an absence of a horizon line. This encourages viewers to feel part of the landscape, to look down and into it, rather than to envision a panorama. Walker has long been an ardent admirer of indigenous Australian art from the Western Desert. In 2009 he presented the Moree Plains Gallery with the painting, Witchetty grubs, by Warlpiri artist Mary Dixon Nungurrayi, as well as an untitled canvas by Takariya Napaltjarri from the Pintupi language group. Moree Plains Gallery is proud to show John R Walker’s art, which has been especially selected for us by the artist and Christopher Hodges, Director of Utopia Art Sydney.

Walker’s Bouddi proudly hung in the foyer for many years. When we acquired the picture the artist was painting landscapes. Later he shifted to figure paintings and, in recent years, has gone the full circle and returned to landscape as this exhibition exemplifies. Walker has a passion for the landscape. He treks through it on extended hikes and has long painted familiar territories. His 1999 painting of Garie Beach, which he generously gave our Gallery, is an expressionist interpretation of a beautiful section of the beach in the Royal National Park, on the southern outskirts of Sydney.