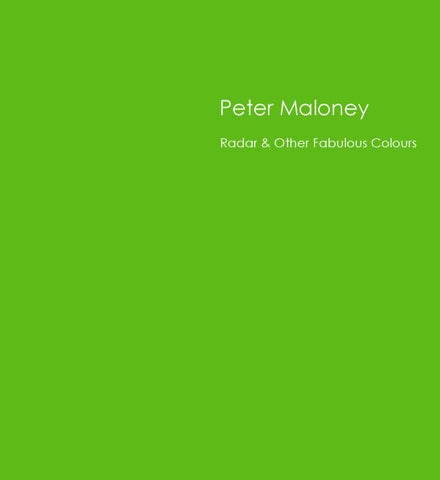 Radars have a peculiar, machinic mode of imaging, as microwaves bounce off objects in their path. Radar is not a colour… The electric surfaces of Peter Maloney’s latest paintings hum with energy, as vibrant colours collide, remnants of past layers poking through at the edges. In the artist’s words, ‘the whole canvas is like a conversation between the colours and between the shapes, and the little bits that exist between the lines feel like interjections of some kind.’ Maloney jokes that his paintings are ‘anti-collage’. The forms are derived from collage techniques but they are executed purely in paint. His compositions are based upon arrangements of remnants of past drawings – original gestural marks that Maloney likens to the cursive line of the written word. These have been manipulated in the photocopier ‘to distort, fragment, assemble and re-assemble. By improvising on the photocopier, a bit like a DJ uses a turntable, I override my natural sense of order.’ He then blows up his small collage bit by bit using said photocopier, marking each sheet with numbers and letters to indicate which page goes where. These symbols emerge in the finished paintings, meticulous transcriptions from photocopy to canvas or paper, as the punctuation – the comma, the exclamation mark – or perhaps as the Freudian slip. With the addition of vivid colour in this latest series of canvasses, the choices Maloney has made, the hues he has left behind, are still visible upon the surface – at the edges of lines, emerging from behind later layers, which preserve each careful

stroke of the paintbrush. Working bit by bit with the pairs of colours within each shape, Maloney continually repaints his surface until he finds a balance between harmony and discord; “it’s a juggling act, because they all have to be able to work together, but they have to be a little bit off at the same time.” The saturated, almost neon quality of the colour in these paintings creates a sense of magnetism, as lime greens and lilacs, saccharine pinks and sky blues bounce against each other. Lines thrum – haloed. Maloney so skilfully captures the illusion of collage that shapes appears as distinct, layered planes, their fine edges like cuts into the surface of the canvas. The figure-ground relationship is charged with electricity, as forms hover and then settle into the surface. There are the fractured ovoid shapes of Pearl and Equinox, sitting upon their similarly fractured grounds – an island, a seed, a thought, adrift in a sea of neon data. There is the thrusting triangular form of Siren Song – the sense of a figure floating in space, alone but radiating outwards and upwards, scanning the void. In the diptych Pagan Spring, we might see embracing torsos, figures in dance, spinning as the eye travels from foregound to background. The pairs of forms do seem to talk to one another across their divides, as they touch and then veer apart – a binary buzz like that of a computer in overdrive, or the whoosh of a photocopier in action. The conversation is continued in Maloney’s textbased works on paper, in which mashed up clippings from old headlines are painted, torn edges and wonky scissor lines intact, over similarly

vibrant fields of lines. These cryptic statements, harking back to the cut-ups of William Burroughs, read like a Dadaist poem on acid, with equal amounts of humour and the macabre. Maloney is what one might call a font fanatic and the weight, slope, width and absence or presence of serif in his found texts are all part of a formal dialogue which operates in tandem with the mental images thrown up by the words themselves.

However we choose to read Maloneyâ&amp;#x20AC;&amp;#x2122;s creations, we can embrace them, as the titles of the canvasses suggest, as a pagan celebration of colour and form, and the peculiar rituals of their enunciation.

An exhibition of new works by Peter Maloney