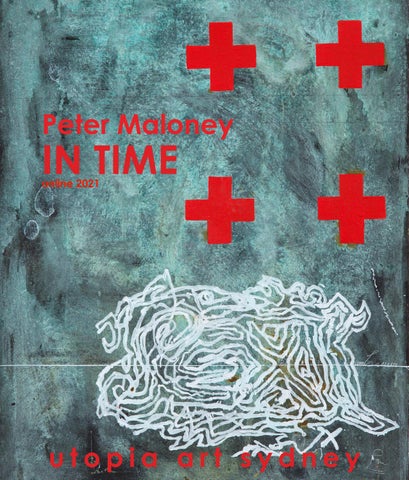 Peter Maloney IN TIME (Cronos) Across the centuries, year in, and year out, time – it seems – waits for no one. Time itself, of course, is a social construct – a framework of logic imposed upon the abstract, the intangible – the ineffable. In Greek mythology, Cronos was the leader of the first generation of the Titans – divine descendants of Gaia, or mother earth. Prior to the development of Greek city-states, Ancient Egyptian astronomers had already codified time into identifiable accounts for day and night. Greek philosophers, including Pythagoras, assimilated the Egyptian methods of considering time, into the conventions of twelve hours of day and twelve hours of night, that remain familiar to us today. This system effectively calibrates the complexities of modern life – providing a framework for its functions, as we adhere to the requirements of Cronos – chronology – to schedules and timetables. We have watches, diaries, and calendars to reflect our contemporary commitment to these conventions. Pythagoras also devised the Greek cross, and its characteristics of four arms of equal length and thickness – symbolising air, fire, water, and earth – the essential elements of Gaia – symbolic of natural harmony. Maloney employs this device as emblematic of personal experience, and his awareness of the fragility of life in all its forms. We live in the time of the Anthropocene – when the effects of human civilisation on the natural world seem to be moving dramatically towards incipient change. Maloney’s highly charged, yet intimate new series of works, draw parallels between our own experiences and memories of fire-ravaged landscapes and the damage wrought by illness to human pathology. The painted surfaces of these works are frequently devised with earth-toned pigments, composed from richly hued iron and copper oxides. Web like formations – appearing as curlicues of smoke, amoebas, or microscopic elements – float on, or are embedded within, apparently corrosive

topographies. This pictorial terrain reflects, in turn, the elements symbolised by the Greek cross – appearing in Maloney’s work for the first time. At other times, the artist returns to his serial fascination with typography and the interplay of pulp media headlines, intimate provocation and public confrontation. Posing as junk collage, the images are, in fact, carefully scripted, and meticulously painted works, in which Maloney engages with themes of corruption, decaying moral consciousness, hypocrisy, and references taboos, foreboding, and impending disaster. The resulting imagery frames a dissonant visual chorus, produced in a related chord to his more ethereal, curvilinear abstract compositions – even if the score has been played in a different key. The works displayed under the title, IN TIME, capture Maloney’s ongoing dialogue with abstraction – with the intangible – the ineffable – and the unconscious – while continuing a line of enquiry regarding the dismantling of social shibboleths. These works align themselves with the imagery of text, while simultaneously articulating the language of abstraction. In effect, this exhibition summarises the artist’s life in art – as rumination on the exigency of time itself. As the clock ticks away, and days of the month are crossed off the pages of his diary, at this time of his life, Maloney takes advantage of advancing years to both gain, and provide perspective. The resulting works unquestionably display the artist’s sagacity – retaining the raw power characteristic of youthful expression, while knowingly embracing the painterly effects that reflect a lifetime’s commitment to studio practice. Mark Bayly September 2021 Mark Bayly is a Canberra-based curator. He and Peter Maloney have been partners since 1995.