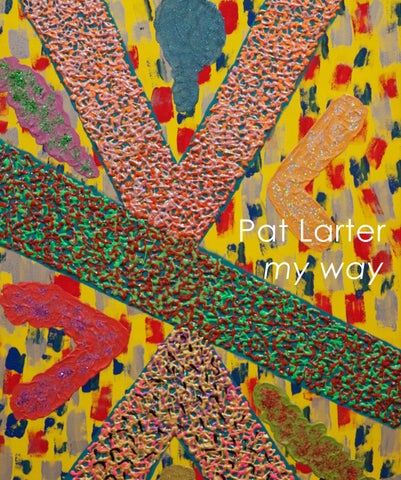 Pat Larter Pat Larter was an amazing woman. I knew ‘Pat’ through her husband Richard Larter’s paintings. Pat was Dick’s muse and his eternal subject, which made them both very well known figures in the art world, and Pat one of the most painted women in art history. After decades of posing Pat decided to ‘retire’’ in the mid-eighties. After years focussed on supporting Richard and his work, and raising a family, it was now her time to start making paintings of her own. I knew Pat well but it was not until her first solo exhibition at the Legge Gallery in 1992 that I got to meet the real Pat. Nothing prepared us for the exuberance of her paintings. It was as if a pent up energy had been released, there was a youthful exuberance, barely tempered by years of living amongst art and artists. The room was aglow with incandescent colour, metallic paints, glitter charged and squeezed straight from the bottles. Vivid lines of colour snaked over already vivid background layers. These were new and exciting abstract paintings, they pushed the limits with their savvy psychedelia. They were fresh, different and unique.

Her ensuing shows always had to have that bit more, reflective surfaces and fabrics were embedded into her picture planes, big bright jewels studded the paintwork. There was no holding back! It took a while, but eventually the human body had to enter the frame. Pat had done her share of modelling and now she turned the camera on others, fixing their images directly into the paint layer. Her models seemed to share her reverie and added their own cheeky take on the role with their boas and bits. Pat was a multi media artist long before it was a thing, she made films, mail art, dressed up, posed and performed, but it was these paintings that introduced her to the public gaze and they created quite a stir. The works in this exhibition, all come from the Larter Estate and have emerged from the store, and their plastic chrysalises, as fresh and vivid as the day they were made. We are delighted to be able to assemble such a fine group of works. They have lost none of their vitality, they are amped up, hi viz and brilliant. Pat Larter was a lovely, savvy, smart and witty woman, and when it was her time to shine, she gave it everything she had! CH