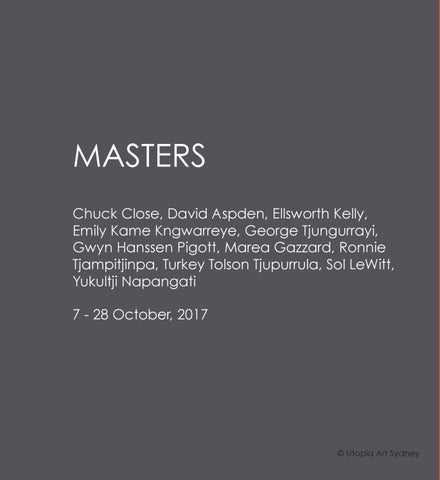 “Ellsworth Kelly was one of America’s greatest 20th century artists, known for his numerous contributions to the Minimalist, Colour Field, and Hard-Edge Abstraction movements. As a proponent of pure colour and form, Kelly’s work often consisted of bright, monochromatic shaped canvases and sculptures.”

Having made some of the most recognizable images in American art history, Kelly has shaped more than half a century of abstraction and remains a vital influence in American art. In 2016 Kelly received the National Medal of Arts from American President, Barack Obama.

“Turkey Tolson Tjupurrula was among the first of a slightly younger generation of artists to begin painting at Papunya in 1973. By the late 1970s he had developed into an accomplished artist in his own right. In 1990, Tolson painted Straightening the spears at Ilyingaunga – this work, now in the Art Gallery of South Australia, Adelaide, heralded in a new phase of minimalism in Papunya Tula art. Throughout the next decade he would occasionally represent the same site, using arbitrary variations of his dotted line to echo the irregularities of thin mulyati (acacia species) spears.” Art Gallery of New South Wales, website

Kngwarreyeâ&#x20AC;&#x2122;s work was exhibited at the Venice Biennale in 1997, and in 2000, Queensland Art Gallery curated a major survey exhibition Emily Kame Kngwarreye: Alhalkere: Paintings from Utopia. This then travelled to the Art Gallery of New South Wales, the National Gallery of Victoria, and the National Gallery of Australia. In 2008, a major retrospective of Kngwarreyeâ&#x20AC;&#x2122;s work, Utopia: The Genius of Emily Kame Kngwarreye, was exhibited at the National Museum of Art in Osaka and the National Art Centre in Tokyo. Her work is now included in every major public, corporate and private collection in the country and increasingly abroad.

George Tjungurrayi served his “apprenticeship” as an artist at Papunya in the late 1970s, amongst the senior Pintupi masters. In 1997 Utopia Art Sydney staged George’s first solo exhibition, with simplified linear fields that demonstrated a strong new voice. His inclusion in exhibitions like Meridian at the Museum of Contemporary Art, Sydney in 2002 have placed his work firmly within the context of contemporary Australian art. George Tjungurrayi has been selected for the 2018 Biennale of Sydney.

“Yukultji Napangati paints in a linear and optical style characteristic of Pintupi artists, creating vibrant, shimmering aerial landscapes that poetically convey lived and learned experience of place. Now based in Kiwirrkura and a member of the Papunya Tula co-operative, she began painting in 1996 following in the footsteps of senior women Pintupi artists such as Makinti Napanangka, Inuywa Nampitjinpa and Walangkura Napanangka. Napangati’s story is particularly fascinating. From her birth until 1984 she had no contact with white people, living with eight members of her immediate family (the so-called ‘lost tribe’) in an area of country to the west of Lake Mackay, on the border between Western Australia and the Northern Territory.”

â&#x20AC;&#x153;Pintupi artist Ronnie Tjampitjinpa was one of the youngest men to begin painting at Papunya in 1971 and one of the founders of the hugely influential Papunya Tula Artists group. Tjampitjinpa has received a number of awards, including the 1988 Alice Prize, his first solo exhibition at Gallery Gabriella Pizzi, Melbourne in 1989, his inclusion in Dreaming, Asia Society Gallery, NY, 1988 and Australian Perspecta 1993.â&#x20AC;? In 2015, Tjampitjinpa held a major solo retrospective at The Art Gallery of New South Wales. Media Release, from the AGNSW, 23.03.2015

“Marea Gazzard was a vital figure in the Australian art scene from the 1960s. Moving between ceramics and other media her sculptures have been incorporated into some of Australia’s most important institutions including New Parliament House in 1988. Gazzard’s Greek heritage and an admiration for Grecian and Etruscan forms translated to her signature monolithic and robust forms, made from coiling techniques. Gazzard similarly stated that her interest primarily was about the creation and inhabitation of the form of the vessel.” Sarah Johnson, Time, form and clay - the power of the handmade, 2014

Works from Gazzard’s Bularri series are in the collections of the Art Gallery of NSW and the High Court of Australia.

Chuck Close’s screenprint, ‘Self-Portrait Screenprint’ printed by Pace Prints, New York, 2006. “Chuck Close has developed a strategy for mapping the world in a system of visual metaphors. His paintings, photographs, and prints mark an intersection between representation and abstraction that simultaneously of the moment and timeless.” Terrie Sultan, Chuck Close Prints introductory essay

Creating large-scale photo-realist portraits, Close has forged a career making work based on minute observations of his own head and that of his friends and family. Close’s square by square process has been intrinsic to the composition of his work.

Starting from the simple but radical new idea that an artworkâ&#x20AC;&#x2122;s concept is more important than its form, Sol LeWitt helped revolutionize the definition of art in the 1960s. LeWitt created seemingly simple geometric sculptures and drawings and later designed colourful and exuberant wall paintings. Employing a team of assistants to execute his work; LeWitt designed and conceived of the idea for an artwork, but left others to carry out the materliaistion of the idea. Reducing art to a few basic shapes, colours and types of lines which were arranged according to guidelines and instructions.

Gwyn Hanssen Pigottâ&#x20AC;&#x2122;s later work is known for its translucent porcelain and pale glazes, however, Gwyn was repeatedly drawn back to the colours of her earlier career â&#x20AC;&#x201C; bronze, copper, and chocolate glazes made iridescent by wood firing. One of the last works Gwyn created, Trail with purple beakers is a looser arrangement to her previous work. Allowing the individual parts to breathe, and for light to reflect and glint off the curves. Similar late still lives by Pigott are in the collections of the National Gallery of Australia and the Queensland Art Gallery.

“The dramas that Aspden created remained defiantly abstract although anchored in the world of the senses. In his experiments with collage he seemed to enjoy the process of tearing a piece of painted paper, exposing the whiteness of the edge. When these fragments were glued onto a coloured backdrop they took on a three-dimensional aspect, creating the illusion of recessive space. This may not sound like a major achievement but it lends a vitality to even the most minimal configurations.” John McDonald, SMH review