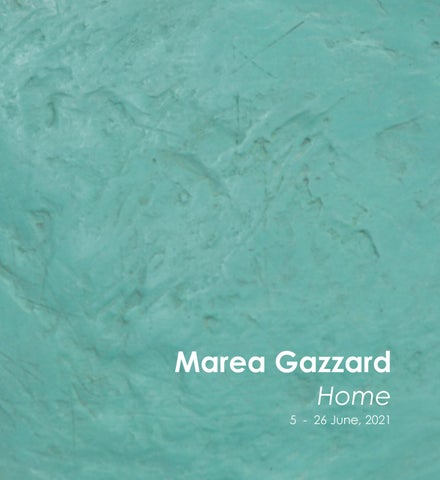 “The most impressive aspect of Marea Gazzard’s long working life, and the

“The most impressive aspect of Marea Gazzard’s long working life, and the one that constitutes her claim on our attention as an artist of the first order, is its integrity. Everything Marea Gazzard does, every move she makes into new areas of practice and reference, belongs to a single sensibility and consciousness, a single vision of what a life and a body of work, when completed and seen whole, might be.” David Malouf Marea Gazzard’s career as an artist, spanning over fifty years, has been marked by a fine record of exhibitions, including a major retrospective at the S H Ervin Gallery in 1994, accompanied by a perceptive monograph by Christine France. In 1973 she and Mona Hessing mounted the now historic exhibition CLAY + FIBRE at the National Gallery of Victoria. In 2013 a survey of 30 years of her work was staged at Utopia Art Sydney. In the same year, Gazzard’s last major work, Selini I, was installed at the entrance of the Art Gallery of New South Wales. Gazzard has completed major public commissions, such as the bronze “Mingarri: The Little Olgas” in the executive forecourt of Parliament House (1984-88), Canberra and a ceramic sculpture, Bindu, for the Athens Olympics (2004). Gazzard was acknowledged for her contribution to art in Australia with a Member of the Order of Australia in 1979, and in 1989 she was the first woman to be awarded an Australian Artists Creative Fellowship. Her work is in all of Australia’s leading public collections.

Marea Gazzard’s minimal and elegant bronze sculptures have first been made in clay by hand. The surfaces of these timeless forms reveal gentle depressions from fingerprints and fine crosshatched marks, etched into the clay before casting. Marea was drawn to organic geometric forms, presenting an interesting engagement with the dynamics of positive and negative space.

Marea Gazzard’s father came from Antikythera, a tiny island just off the coast of Kythera in the Aegean Sea and thus Marea always had an affinity with the art and culture of this region. The islands rise sharply out of the ocean and were strategiec even in ancient times. The architecture of the region is simple and many remnant structures made an impression on her, especially windows and door ways. She embarked on a series of works, Portara which, as the name suggests looked at these opening spaces. At the end of the sequence she made a pair of square forms with a central opening which she named Kythera and Antikythera respectively. It’s interesting to compare these two works to the flat forms of the Zabuton series. While the inpiration is quite seperate the resulting works share a simple archaic form. CH

Clay was her first medium of choice. Eschewing the fancier descriptions of terra cotta or porcelain, ‘clay’ is the only word she used as descriptor. This plain talk was in keeping with the work. Gazzard ekes from this fragile material objects that imparted a rigour and an ease. It is not surprising then that these works transform so readily into bronze. Gazzard worked in bronze early in her development but did not return to it until some years later. When she did however it became a powerful part of her oeuvre and sculptures evolved in clay and bronze. Some works have been developed directly from clay masters. In one exhibition a clay version of Zabuton was exhibited beside its bronze counterpart, identical except in medium. Other works have been formed in clay with the aim of a bronze work alone resulting. During a residency at Shigaraki Ceramic Culture Park, Marea discovered an affinity with the work ethic of the young Japanese artists and began a series of clay forms based on Tatami pillows. This series, Zabuton, was shown at SOFA, Chicago in 1998 and later at the Art Gallery of NSW. CH

“En route to Fiskars, Finland where I exhibited Zabuton, I spent a couple of days at the British Museum. The objects which captured my interest, and to which I returned again and again, were small flat disks from Malaysia (2-3rdM .B.C.), miniature Chinese seals and charms and the jade disk Pi. My way of working is to brood over an idea for a long time. A year later I started making lots of maquettes in white porcelain and in wax. From these I selected the disk shape and developed large pieces in clay. From Cirlot’s Dictionary of Symbols: Disk An emblem of the sun and also of the heavens. In China, the ‘sacred disk’ is a symbol of celestial perfection, and the disk that actually represents the sky (the jade disk called Pi) has a hole in the centre.” Marea Gazzard

Gazzard seems to transform her materials into something completely different. She makes clay, which is heavy and dense, and hard after firing, somehow appear weightless, airy and light. To me that is something quite magical. Rebecca Edwards, Sid and Fiona Myer Curator of Ceramics and Design, NGA. Marea Gazzard has maintained the self-sufficiency of each piece with a clarity of edge and upward thrust which creates their own centrifugal energy... The white handbuilt surface submits to form. Frontally, Milos IV, appears solid but are in fact thin mask-like walls inspired by funerary masks Gazzard had seen in the Louvre. Their minimal folds and soft shadowing create a powerful stillness. In the same way as the bronze works, they establish a penetrating presence. Christine France

Following Marea Gazzard’s exhibtion at Coventry in 1990, Marea travelled to the USA, where she studied the work of modern sculptors such as Oldenberg, Giacometti, Miro and Noguchi, it was the early spearheads, axeheads and knives that drew her attention. Interested in the intuitive and primary response evident in the making of these primitive tools and weapons, Gazzard began to record them and became fascinated with the variety of forms present in such simple objects. Back home she started small scale works in wax, these were eventually cast in bronze in 1993. Entitled The Field series, they included Flint, Barb , Haft, and Tine. Christine France

Marea often played with forms that looked like they may have once been drawn from nature and at the same time resembled human form. This boulder like shape is reminiscent of other works in her ouerve especially the bronze Bungles which came later but it also feels like a human torso and has a prescence that occupies space and fills the room. This work was often in Marea’s apartment sitting quietly but never overlooked. The colours of this particular piece are full of the rich ochres we immediatly identify with as Australia. Her use of subtly modulated surfaces and smudged colour variations bring what could be a mute form to life. In a strange way this form becomes a marker, a sign of significance. CH

Selini was Marea’s last major series of works. Selini I, the largest, is currently on view at the Art Gallery of NSW in the entrance to the restaurant on the ground floor.

Selini Phase II is the next size down. The Selini Phase series are the only ones made in this lustrous green patina. Marea pushed the patina to the limit to acheive this intensity and they stand in contrast to their golden siblings. CH

Bindu represents the sacred symbol of the universe. Marea Gazzard

Tightly clustered and displayed at waist height, viewers looked onto and through a suite of rectangular vessels, forced to move around the collection, becoming one with it and the intimacy of its surface. The subtle range of color despite their ‘whiteness’ mirrored the ethos of consideration across this exhibition, indeed across Gazzard’s career, drawing the viewer into that sensitivity. Gina Fairley, Enduring Form, World Sculputure News, Summer 2013

In 1990, Marea Gazzard became the first woman working in the visual arts to be awarded an Australian Artists Creative Fellowship. This enabled her to continue her work on what became The Head series. Which was exhibited at Coventry in September 1990. Christine France The Head was Marea’s favourite piece which she kept close to her. Originally hand built in clay, these elegant forms have a seemingly effortless simplicity. They stood as silent sentinels at the entrance to Marea’s apartment right up until the end. The Head is a unique piece on its original granite bases. Marea made a number of works in series or in groups but this is the only time she used the totemic form at life scale. Each piece is unique and while they have great presence individually, as a group they stand with the presence of elders. This is Marea’s most significant bronze work outside of a museum collection. CH