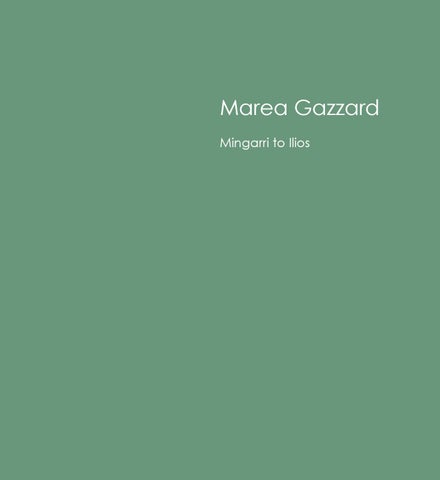 After more than five decades of her practice, Marea Gazzard is at ease with her forms. She has never before allowed them to sit so loosely or so casually as in her most recent creation, Ilios. This group of gently curving bronze slices ask to be arranged and to be touched. Each piece responds to the others in scenes without preordained composition. With each grouping of parts the impact of the whole takes on varying rhythms and allusions – a landscape of hills or boulders, a cave, a still life. Inspired by aboriginal stone implements seen at Sydney University’s Macleay Museum, Ilios could also be the site of an archaeological dig, as a group of stones on the ground reveal themselves to be crafted objects with untold cultural and ritual importance. Marea has long held a fascination with the objects of other, often ancient, cultures, from Cycladic and Aegean to Indigenous Australian. Across the works in this survey we find such references – to a mask, a weapon, a tool, observed and reworked, transformed into something that is pure form and therefore timeless, irreducible. Ilios can be understood as a continuation of the 2009 Selini series, which also lead to the Crescent series of 2011. Like Ilios, Selini was developed after a visit to a Sydney University museum. Marea was captivated by the small clay labrette (female mouth pieces) she saw there, excavated at Cyprus and dated from 1100 – 300B.C; “I saw these labrette as a phase of the moon and in my studies made large drawings, seeing this shape as a segment of the moon.” Ilios, like Crescent, could be slices of Selini, but now the forms have been allowed to lie flat, relinquishing their base and its upward momentum. Of course, it’s hard to ignore the sense of landscape in Ilios and inevitably this invites a return to Mingarri, Marea’s major commission in bronze for the Executive Court of Parliament House in Canberra and the starting point for this survey. Working in clay, the substance of the earth and the processes which shape it have always been an important point of reference for Marea.

The forms of Mingarri bear a literal reference to the iconic rock formations of Central Australia. At Australia’s political centre, Mingarri evoked the symbolic heart of our continent in a universal formal language, shaped in clay and cast in monumental bronze. Since Mingarri, bronze has become more and more the dominant medium for Marea’s sculptures, although their forms continue to emerge from the clay. The inherently tactile nature of clay, each mark of the artist’s hand, is preserved in the bronze, although what was fragile is now invested with a permanence and weighty presence. Of course, Marea has not abandoned her clay pieces altogether and major works such as Bindu (white) only exist in their clay form. The varying patinas that Marea has worked with – gold, black, blue-green – imbue the bronze object with different qualities – now a silhouette, now a shimmering, incandescence. The blue-green patina of the Ilios in this exhibition (Marea has also cast a gold version) has a painterly surface like that of ancient, weathered rock. This patina is based upon a recipe Henry Moore generously shared with Marea in 1986, as she was researching the best surface for Mingarri. Yet, each time Marea has used this recipe it has developed and evolved, along with her forms, into something entirely unique. It would be futile to invoke a simple trajectory of formal evolution when examining Marea’s work of the past three decades and in this survey we have made no attempt at exhibiting the works in any kind of chronological order. From Mingarri to Ilios, everything is connected. If, in millennia to come, the work of Marea Gazzard is found in some untouched vault beneath layers of heaped earth, we should be proud to have her represent our time with her own enduring vision. Chloe Watson, 2013