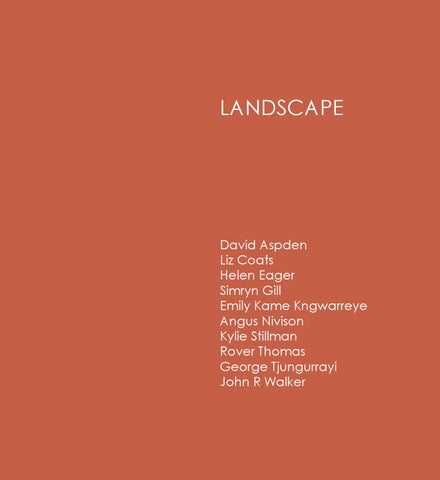 And the sun sank once again on the grand Australian bush – the nurse and tutor of eccentric minds, the home of the weird, and much that is different from other lands. Henry Lawson, ‘The Bush Undertaker’

What makes Australian art unique? This question holds particular currency at the moment, as the art world has taken stock after the opening of Australia at the Royal Academy of Arts in London. The answer: surely, our landscape and the dynamic tradition of art it has inspired, from the pre-contact history of indigenous Australian art-making to early colonial topographic drawings, from the Romantics to the Heidelberg school, from Williams and Boyd to Kngwarreye and Thomas. So, if we understand indigenous and non-indigenous art making under the rubric of the landscape genre, for just a moment, no matter how limiting this categorisation might be, we can begin to understand the amazing dialogue that makes Australian art so interesting – first and foremost a dialogue with the country itself, but also a dialogue that takes into account the histories of its representation, and accordingly, a dialogue between different artists from vastly different backgrounds. It is a real shame then, that the Australia exhibition in London presented the work of contemporary indigenous Australian artists such as Kngwarreye and Thomas in a room of their own. John McDonald described this first room of the exhibition as “a spectacle and a sideshow,” and its placement before works from the colonial era and an ensuing chronological survey of Australian art seems to imply that indigenous painting stands outside of the greater trajectory of Australian art history. It comes as no surprise that the show was also strongly criticised for its weak ending – an incoherent medley of disparate works only loosely connected to the Australian landscape. With the founding of the acrylic painting movement at Papunya in 1970 came Australia’s first truly international art movement – one that our nation has, perhaps ironically,

capitalised on above any other form of cultural output as an exportable high art commodity and marker of identity. Forty years on, this movement is as vibrant and innovative as ever. It seems foolish, if not negligent, to have segregated these works from other contemporaneous Australian art. In contrast, in typical Utopia Art Sydney style, the works in this exhibition, whether by indigenous or non-indigenous artists, are hung side by side. Works by John R Walker of the landscape around his home in Braidwood in the Southern Tablelands of NSW resonate with those by Emily Kame Kngwarreye of Anmatyerre country just north west of Utopia, on the edge of the Simpson Desert. In much the same way, George Tjungurrayi’s paintings of sites around Wilkinkarra (Lake Mackay) in the Western Desert region sit happily beside those of Angus Nivison, who has lived his whole life on a property near Walcha in the Northern Tablelands of NSW. Of course, many of the works in this show could just as easily be understood in terms of abstraction. Might the Rover Thomas be an expressive monochrome with a stippled edge? Might the George Tjungurrayi be an ab op play of lines? Conversely, might the Helen Eager evoke a mountain range, or as its title suggests, might its deep blues and greens be those of a lagoon? We know for sure that David Aspden’s abstract language was inspired by the landscapes he inhabited. It could be argued that the Australian landscape invites abstraction – vast horizons, punctuated here and there by great escarpments, monoliths, scrawling bush, open cut mines. The recent Australia exhibition at the Royal Academy in London, purportedly focussing on the uniting presence of the landscape in Australian art, created an artificial great dividing range. In contrast, we hope this exhibition reflects the hybrid affinities to place that make our art different from that of other lands.