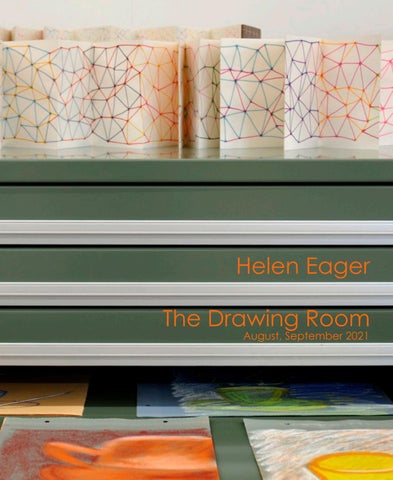 It is impossible to walk through the corridors of Sydney’s Museum of Contemporary Art without being captivated by the striking abstract forms of Helen Eager’s Tango. This monumental wall painting, extended across the ground floor wall, exhibits Eager’s astonishing ability to exude captivating energy with such a minimal composition. The satisfying harmony of each equilateral triangle is challenged with an enticing tension as each form barely touches the next. Each shape holds its own in the negative space while simultaneously creating synergistic relationships with each other as they intermingle and dance a ‘tango’ together. The MCA and Helen Eager have had a strong and cherished relationship over the years with Eager’s last major retrospective exhibition coinciding with the reveal of Tango in March 2012, inaugurating the prestigious MCA’s Circular Quay Foyer Wall Commissions. In 2021, prolonged anticipation mounts to see which visual delights will light up Sydney’s cityscape in the beloved Vivid Sydney Festival, Helen Eager will hold the prime position projected across the exterior façade of the MCA. To accompany this anticipated reveal, Utopia Art Sydney will host a dual location exhibition to display a rare insight into the evolution of Eager’s works. The Drawing Room, at Utopia Art Sydney’s Bourke St location will delve into Eager’s works on paper while a second, more exclusive display, will be held in a private gallery to showcase some larger scale works and reveal her latest endeavours.

rospective of a living artist, and to engage with their own direct reflections on their vocation as an artist. Modest as she may be, Eager has risen as one of the leading Australian Abstract artists;

represented in every major Australian public and private collection with a career spanning nearly five decades, 30 solo exhibitions and 130 group exhibitions. However, her distinctive geometric practice originated from an almost unrecognisable style. Born in Sydney, Eager’s artistic interests developed in her formative years studying printmaking at the South Australian School of Art in the 1970s, during a pivotal era for women’s art globally. Drawn to colour from the start, she drew inspiration from artists such as David Hockney as she studied the landscape of her immediate domestic interiors. Considering the spatial relationships, the personality of decoration and the interactions of light within the private spaces of her studio and living rooms, Eager explored the playful, delightful senses of intimacy and home. Rare examples of these were recently showcased in the National Gallery of Australia’s 2020-2021 Know My Name exhibition, celebrating eminent women artists of Australia. Looking towards her major upcoming exhibitions has drawn Eager back to the deepest layers of her studio drawers to reflect on her past body of work. Her impressively vast catalogue of works reveals a deeply thoughtful and creative evolution. Residing in these drawers, careful preparatory sketches, water colours, crayon and gouaches beautifully narrate Eager’s process of reimagining and honing the infinite possibilities of her abstract forms. Notably, Eager reflects on how as you delve deeper into the strikingly unfamiliar subjects and techniques of her earlier, representational works from art school, “you make connections that you hadn’t noticed before”. Within these playful studies of domestic interiors, the angular silhouettes of triangular forms and her instinctual eye for the relationships of

contrasting colours begins to emerge, revealing the essence of her eventual shift to pure abstraction. These connections may be noticed in the upcoming Utopia Art Sydney exhibitions.

It was during a residency in the late eighties amidst the

epicentre of a boom in New York’s art district where Eager’s practice pivoted towards her signature style of pure abstraction. The evolution of her work from this point onwards is the subject of the upcoming Vivid Sydney piece, New York Sunday. In collaboration with motion graphic designers, Rico and Julian Reinhold, Eager’s immersion into the abstract realm has been transformed into life in a real dance. Projected over six storeys, Eager’s triangles are conceived almost as organisms, dancing and vibrating against each other, before disappearing and reappearing through a vortex of abstract geometry. Accompanied by the driving, but melodic electropop composition of Paul Mac, the piece is an elegant fusion of retro and contemporary. Returning to the piece after an extensive production process, Eager was delighted; her collaborators have injected an innovative new dimension in the digital medium while authentically savouring the beauty and narrative of her work. Helen Eager and Vivid Sydney are a seamless pairing; both timeless celebrations of light, colour and movement, applied with a careful eye for analytical geometry. While much of the artworld persists to be motivated by hardship, one of the most alluring qualities of Helen Eager’s works is the sharp sensations of pleasure and passion, injecting us with a fervour for the beauty of the world around us. India Ford, 2021

Prototypes (for Satellites) 2017-18 Drawing is an essential and integral part of my art making. The Essence. Sketches....... The way to get free thought going. Playful, thoughtful, inventive, intuitive.... Ideas feed off each other. Invent. Oppose. Struggle. Sequential. A development that guides... These Drawings. The beginnings and the end. Exploration, colour, shape, tension...... Forms around triangles. The same construct over and over and over. Refining. Honing. The Essence. These drawings. Directly relate to paintings. As a starting point. Shapes. Relationships. Composition. Colours. These drawings. Necessary to order the mind. Firming the trajectory for painting. These drawings. Like viewing stars in the night sky. Our minds try to make sense of randomness. To find patterns and shapes... These drawings. All arranged together Something greater than the individual parts. Helen Eager 2018

The Australian Drawing Biennale 2000 Drill Hall Gallery, Australian National University, Canberra, 16 November – 17 December 2000 Essay by Joe Eisenberg Since colours and forms are well nigh innumerable, their combination and their influences are likewise unending. The material is inexhaustible.1 In 1939 Henri Matisse wrote: ‘I have never considered drawing as an exercise of particular dexterity, rather as principally a means of expressing intimate feelings and describing states of mind.’2 Helen Eager demonstrates Matisse’s view simply but exquisitely in her drawings of geometric abstractions not the least of which are the current explorations of the triangle represented in this exhibition. Eager is committed to drawing as a medium with a stand alone status. For her it is not merely a step or part of a progression which may lead to a painting. Her drawings are works in and for themselves. The triangle shape which she employs again and again creates tension juxtaposed by combinations of varying colour. The colours are not monotonous and tones are created by graffitti-like scribblings or sgrafitto. Eager is in total control – the colours, the shapes, the scratches, the variations - very little is left to chance. The viewer, however, is left to resolve and interpret contradictions which arise from the different relationships brought to focus in Eager’s drawings. Less is evidently more as we let our eyes map the lines and work over the paper. We are left with colours and shapes which change ever so slightly but which allow us to ponder the different challenges posed by the artist. All are variations of a constant theme. The components of her work are the engineered clash of shapes which make up triangles, lines which lead to peaks or troughs, and colours which are never left to their own harmonious existence. Each configuration alters only a little from the next and each shape is qualified by her specific selection of colours. All this is done with a quality of meditative thoughtfulness. It is the colours which give

meaning to the shapes, and the colours are as controlled as the shapes which bind them. The changes may be slight, but each work is unique and entices us to elicit a singular response. As well, as a body of work, the drawings offer other possibilities. They can be viewed as much more than geometric explorations and cerebral wanderings or jottings. They can be seen as Eager’s view of nature, the physical world, the cosmos and, indeed, our existence, all in the form of metaphor. It is a view shaped by living in inner city Sydney and by an escape to a rural retreat each weekend. Eager began these explorations after a visit to North America more than a decade ago but she brings little of that country’s abstract expressionism into her current work. Hers is more of a search for, and a drive away from, the interiors for which she had become renowned in the 60s and 70s. She now explores the corner of a lounge or the angle of a light shade to its ultimate. She shows little interest in the viewer being able to observe a figurative interior image. She is more concerned about reactions bedded in emotions or feelings. Her constant explorations provoke questions such as why specific colours? why the constant triangle? why play with colours and create variations by overworking the pastels? Her work can simply be accepted as visual enjoyment, the pure pleasure of looking at almost identical shapes of colour. The shapes can also be translated into the world of the everyday, the mundane. The angles of colour are like the light beams of a car pointing together into the darkness of the night or a torch beam directing light along a floor. Perhaps they are flat shaped pyramids or the tops of mountains. The triangle symbol can be translated into much within our cognitive world. It is obvious that Eager is not tiring of exploring the triangle as she never repeats herself. Her colours and tones are different from paper to paper. Her interest is in the aesthetics of what she forms so laboriously and calculatedly. Everything is done with great sensitivity, be it for the creator or the viewer. Eager’s work is seductive and reflective as well as sensual and a little decorative, and it is uniquely hers. Although her simple geometric shapes

can be found in both the real and symbolic worlds, her explorations are hers and hers alone. We can easily identify an Eager drawing. It is personal and pure. Some critics believe that Eager has ‘painted’ herself into a corner by drawing the same shape over and over. These critics have perhaps forgotten that, in the tradition of Kandinsky, the artist goes back to the same shape and colour until the possibilities are exhausted. Eager’s work speaks readily to any viewer who cares to look, consider and appreciate. It has taken her time to get here and hopefully she will stay for yet some time and continue to explore her triangle, its boundaries, its colours and the scratches which make up her drawings. The shapes and colours are not yet exhausted.

Angle On The Edge

Searching The Shadows The Pot