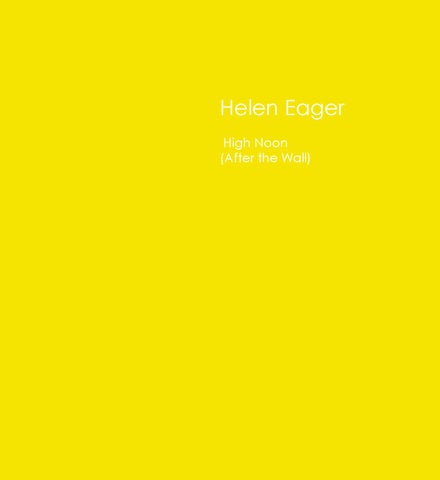 You will notice as you flick through the pages of this e-book that there are no reproductions of particular paintings. Instead, you will find the works in situ in Helen Eager’s Sydney studio, amongst easels and armchairs, beside tables covered in tubes of paint and tins of brushes, stacked one against the other, yellows against pinks against oranges against greens. We decided that our usual model of publishing exhibition catalogues would not suffice for Helen’s latest paintings – they simply do not translate in reproduction, or conversely, they deserve to be experienced ‘in the flesh’. Too often we imagine that we have seen a work of art by simply clicking a few buttons on a website rather than making the pilgrimage to experience the thing in itself. Perhaps more so than most paintings, these works demand to be stood in front of, they require and reward that extended moment of looking. Thus, each canvas is not itemised for optimum online dissemination. Images of Helen’s studio act as a teaser. They provide an insight into her process and that quiet, light-filled, meditative space into which her paintings are born. Helen loves paints, what’s more she loves to paint, and to draw and to produce prints; all the better if it is in the solitude and serenity of her studio.1 The incredible joy she finds in the act of making – even if it can be hard, even if it sometimes drives her crazy – is a force to be reckoned with, and I think you can sense that joy in the finished products. I imagine the hours she must spend in there, just her and those dauntingly big canvases – first mapping out the compositions, chains of triangles in chalk on primed linen, then building up the colour in layer upon layer of oils. Conversations are started between paintings and between tones on a single surface. The entire body of paintings eventually exist together as a work in progress: 1 “I love different mediums, I love experimenting and playing around with different drawing materials and painting materials… I like to challenge a medium.” Conversation with the author, November 2011. Subsequent quotes from the artist are drawn from recorded conversations with the author from November 2011, January 2012 and August 2013.

They hang around for a long while and you don’t want to rush them because you don’t want to overdo them. It’s really hard to decide on a point when they are finished – and sometimes it means just another really really thin layer of a certain colour over one piece or two pieces. Finally, Helen paints the white. She claims that she just hasn’t figured out another way of maintaining the pristine edges of the triangles, of keeping the ground clean. But it would be fair to say that her work owes som of its potency to the animated quality of these ‘grounds’. Unlike the triangles, which, because they are painted quite evenly using a paper template, have a “blank” surface, the white is painterly – look close and you can see the brush strokes.2 Helen says, “I like to paint the lines by hand, even though it is arduous, because I just like painting.” I am reminded of her obstinacy in insisting on painting the edges of her earlier ‘Angle’ paintings by hand – perfectly straight divides between colours mapped out by following the fall of a piece of string. I always ask Helen to give me some idea of what is going through her mind, what kind of “mental state” she is in, when she paints like this. For some reason it fascinates me. I’m sure it’s all a little bit Zen. “You are just there and that’s what you’re doing,” she tells me, “you really do focus in very closely.” I can’t help but think of Helen’s movement into abstraction in the late 1980s and the way she describes it as a process of “focussing in”, as the objects in her interior scenes became bigger and bigger. “I focused in to corners where the light shines off a teapot or a piece of furniture… 2 Helen says that the “blank” or all-over texture of her triangles comes in part from the original crayon drawings that comprised the 2005 series ‘New Directions’, which were essentially her first foray into this ongoing composition of chains of triangles on white. “I like the all all-overness of the drawing, how the texture is the same all over. And trying to paint the same texture all over a triangle that has little points in it… I was finding it frustrating, so I was playing around with different ways of doing it, like putting an under-colour on over the whole canvas and then painting the white on it. Then I just decided that I would use a template, pieces of paper, so that I could paint evenly to the edge. That’s not unlike a printing technique called pochoir where you have a little template, then you get a brush and stamp your colour over it. So I was sort of referring back to my printing discipline.”

then there was a point where the image dissolved and it became a thing: something in its own right.” In a previous essay I attempted to explain this dissolution of the image in terms of the scale of work Helen was producing, particularly during her residency in New York in 1988: The space of the New York studio, and the ease with which Eager could access large rolls of good paper, allowed her to expand in scale, at the same time bringing her ever closer to the thing she was representing – to the various views provided by the space around her and the objects it contained. She wanted to give the sensation in her paintings of this close vision she was experiencing as she worked, of things so close that they became nothing but “a series of lines and colour”. MCA senior curator Glenn Barkley likened this development to “a pulling back and forth of scale”, not dissimilar to the zoom of a movie camera.3 Today, Helen’s explorations in geometric abstraction have that sense of both the macro and the microscopic – they bring to mind at once constellations of stars and networks of cells. If we come back to Helen’s very physical practice in the space of her studio, we can also see this shifting back and forth in scale in the literal size of her paintings: From the three by four metre canvas ‘Spark’, which seems to be an obvious development from her monumental wall painting ‘Tango’ at the Museum of Contemporary Art, to the miniature ‘sketches’ she paints free-hand as a welcome relief from the precision of her other painting. Helen is, as always, straight-forward about this: “I like a challenge, I think it’s a challenge to work big, I think it’s a challenge to work small, and everywhere in between I guess. Its part of exploring, your ideas and your medium.” But when I push her about her ‘ideas’, with my insistent questions about what’s going through her mind when she paints, she answers: I don’t think there’s anything in your mind when you’re creating – I mean, you can make a whole pile of stories around what you’re doing, and you can do that while you’re in the throes of doing it, but ultimately that’s just sort of tricking your brain anyway. I think 3

that you have all this knowledge and past experience that’s there, I don’t think that it just comes out of the air... I can have a million thoughts, but I’m not sure that’s really what’s happening. When I look at a painting by Helen I think of what Nietzsche once wrote: All those who dwell in the depths find their happiness in being like flying fish for once and playing on the uppermost crests of the waves. What they value most in things is that they have a surface, their skinnedness”.4 So, Helen’s paintings invite us to delight in appearance, just as she delights in the physical act of making. The surfaces of her canvases shimmer and strobe like luminescent deep-sea creatures, like tropical birds in flight, like a swarm of bees, like sand at midday in summer, like a forest in a breeze. The similes could be endless, and that’s the point. Her paintings have an insistent presence that is expansive. They are constantly changing. Their surfaces won’t stay still. In some, dancing chains of triangles threaten to jump out from the picture plane. In others the dazzling white of the ground jostles for attention. In most of these works the eye must constantly navigate between form and ground in a way that can verge on the pyschedelic. Their effect is both endo- and exothermic in that they respond to the changing lights of morning, noon and dusk at the same time as they emit their own light. Finally, and coming full circle, all I can say is that the visual power of these paintings is something that must be seen to be believed.

High Noon (After the Wall), exhibition catalogue with images from the studio of Helen Eager. Essay by Chloe Watson.