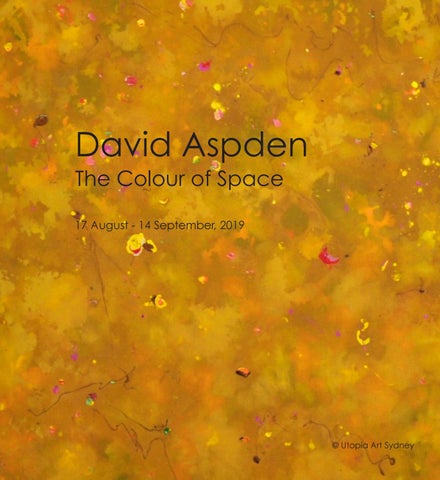 The Colour of Space In 1971 David Aspden represented Australia (with Gunter Christmann) at the Sao Paulo Biennial, where his paintings were awarded a gold medal. The Brazil series paintings were free form colour shapes that had broken away from the hard edged stripes and diagonal shapes of his earlier Flag series in 1969 and the Field paintings of 1968. After his visit to Brazil where he travelled down the Amazon and marvelled at the “different colours... more tropical kind of atmosphere”, Aspden travelled to Mexico, USA and London on his way to the south of France. Here, with his family, he had a studio in Vence for 3 months. In May they went to England, settling near Bath for the remainder of the year, where he shared a studio with John Peart. Upon his return to Sydney at the end of that year, he moved to Castle Hill to a house and studio set amongst three acres of bush. He was able to concentrate in isolation on the new works begun in England. Some of these were displayed at Rudy Komon Gallery in Oct 1972 and May 1973. These works reflected the change of environment and scenery that saw more muted colours, soft shapes and flecks of bright colour across the surface. As Aspden said “the whole shaping system and forms which I had before were still there; but I think the experience of being in Europe and especially in England, softened that up considerably”.

Talking about why he had painted on a large scale, Aspden said “It’s an environmental thing. It makes you do the work. The fact that you could walk past it is important – it isn’t just a thing hanging on a wall. It’s long because it had to be big enough for you to get lost in it ... it lets you in, keeps you out at the same time.” -David Aspden “The wrong place” Tasmanian School of Art Gallery, 1983, exhibition catalogue

John McDonald wrote about this series “Where the Norfolk or Brazil series were orderly to the point of regimentation, these new pictures seemed to observe no rules whatsoever. The canvas is smudged and stained, with paint dripped and spattered in all directions. Yet if we stand back and observe the way these blobs of paint dance before our eyes, one can see that Aspden has produced a spontaneous composition not dissimilar to the action paintings of Pollock.” - catalogue essay, David Aspden: Survey, Bathurst Regional Art Gallery, 2012

The Colour of Space features work from 1972-73, including Constellation, a 5.5 metre long masterpiece never seen before and which is the most significant painting from this important year in his career. All the works in this exhibition come courtesy of the Aspden estate and include works exhibitedin the 18th Sydney Biennale in 2012, and in his survey exhibition at Bathurst Regional Gallery also in 2012. BS