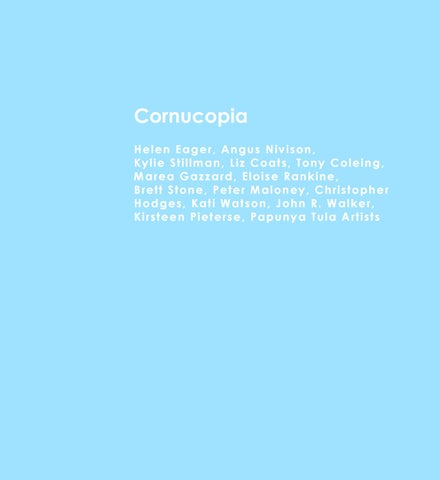 “Not as flat or solid as they initially appear, on closer examination the works range in transparency and depth. By layering surface washes, Hodges builds the form of each shape leaving evidence of brush strokes and the artist’s hand, creating shapes that shimmer and flux with the movement of the brush strokes.”

“Created as a response to the aftermath of the Vietnam War, Coleing’s bronze sculptures are imbedded with the trauma felt on both a psychological and physical account by the individual. Heightened by the small scale of Coleings sculptures, and the solo figure dipicted in each is the idea of constant inherent isolation.” Felicity Brading, 2016

â&amp;#x20AC;&amp;#x153;During the last two decades my paintings have flaunted their ambivalent relationship with histories of abstract painting. While my works maintain some of the outward appearances of post-war abstraction I have always operated as an interloper, attempting in my way to subvert issues of robust masculinity with cut &amp; paste photocopy collage origins and dead-pan paint delivery.â&amp;#x20AC;?

â&amp;#x20AC;&amp;#x153;I think sense of place is very important, not just for the landscape painter but for everybody. We all need to know our place in the world. But I think I could find something no matter where I was. I do like people to feel that my paintings have a feeling of the spirit of where they were painted.â&amp;#x20AC;?

“The concertina book is a kind of prototype for an expanded view – two, four or six or more pages can be visible at any particular time, rather than the limited spread available in the traditional sketch-book. Drawings can be treated as discrete statements or they can spread horizontally; episodic drawings and notations can be read singly or as a series of connected visual observations. The landscape is regarded as a whole, yet, at the same time, it is a journey through motifs – an unfolding.”

â&amp;#x20AC;&amp;#x153;Precipice is a series of black and white lithographs originally printed in 2001, at a time when Helen was painting a series of paintings in the same format. Rediscovered recently while compiling a catalogue raisonne of her prints, each has been hand-coloured, the colour combinations luminous and often unconventional. The pastel softness giving depth to the printed surface.â&amp;#x20AC;? Brett Stone, 2016

“Marea Gazzard had a love of the Australian landscape and forms from antiquity, objects that captured her imagination during her stay in London and visits to the British Museum. Maltese idols, pre-Columbian pottery and the museum’s Cycladic collection, their totemic and emblematic forms translated to Gazzard’s own language.” Gina Fairley, 2013

“To me the central holes or penetrations have become wells of contemplation which attract shadow play, rather than openings which are passed through and although they are a geometric form, their varied fullness and surface marks render them more ancient, more organic; as if caught between breaths.”

“One of the challenges of making a sculpture is ensuring that it stands up... Many of Christopher Hodges’ latest works threaten to fall. They tilt precariously into space. And yet, their steel forms are perfectly poised over bases that are not simply a support, but crucial to the work as a whole. As the artist, explains, “to create balance within a sculpture you need to have every element sitting in harmony... I’m seeking a refinement of form so that it can speak freely and truly.” C.H, 2014

â&amp;#x20AC;&amp;#x153;My studio (in Hong Kong) is located is in an area surrounded by mountains, often shrouded in low cloud giving them a direct visual link to traditional Chinese landscape painting withmountains and mists. Currently there is much upheaval due to the construction of an extension to the mass transit railway network. The juxtaposition of these two elements is dominating my studio practice at the moment.â&amp;#x20AC;?

â&amp;#x20AC;&amp;#x153;I like finding rocks, mud and timber where water collects and dries out. Tidal pools become crusty with salt, and riverbanks are layered with silt. My new bowls are trying to look like they are found - glazes that rust and drip as if weathered and worn.â&amp;#x20AC;?

Nanyma Napangati Nanyuma was born in approximately 1944 and is the sister of Charlie Tjapangati. In Nanymas’ painting’s controlled dotting utilises techniques to create pulsating lines of ‘tali’ which depict important ceremonial stories central to the Pintupi culture.

Ronnie Tjampitjinpa Ronnie was born in the early 1940’s. He spent most of his formative years as a nomad in the remote desert surrounding his birthplace. He commenced painting for Papunya Tula in 1971. This painting depicts designs associated with the site of Walungurru or Kintore. The site is associated with the Tingari song cycle, ancestral stories about figures in the dreaming who travelled over the country creating and shaping particular sites.

Kenny Williams Tjampitjinpa Kenny was born near where the Kiwirrkura Community now stands c. 1950. In 1999 Kenny contributed to the Kintore menâ&amp;#x20AC;&amp;#x2122;s painting as part of the Western Desert Dialysis Appeal. Kennyâ&amp;#x20AC;&amp;#x2122;s paintings depict dreamings which include a python story and Ngamanpura, a swamp west of Kintore where a small berry is found.

Lorna Brown Napanangka Lorna was born in the bush near Haasts Bluff in 1962. This painting depicts the site of Waren Creek, just to the west of Mt Liebig community. This is the artist grandfathers country and there are both rockholes and soakage waters at the site.

Elizabeth Marks Nakamarra Elizabeth was born at Papunya in August 1959. In this painting the artist has painted designs associated with the rockhole of Kalipinpa, a major water dreaming site north of Sandy Blight Junction. In ancestral times a huge storm erupted in this area causing the lightning to flash and the water to rush across the land.

George Tjungurrayi George was born in the desert in the vicinity of Kiwirrkura in approximately 1943. George walked into Papunya with another young man along a freshly graded road, after living at Mukula, west of Kiwirrkura. He commenced painting for Papunya Tula Artists in the early 1980s This painting depicts designs associated with the soakage water site of Tjulurulunga. Associaated with th Tingari Cycle which form part of the teachings of the post initiatory youths

Charlie Tjapangati Charlie was born at the site of Tjulurrunya, west of Kiwirrkura in approximately 1949. Charlie commenced painting for Papunya Tula Artists in 1978. This painting depicts designs associated with Karilwarra a rockhole site west of Kiwirrkura in Western Australia. Two ancestral snakes travelled to this site from the south.

Josephine Nangala Josephine was born circa 1950 and grew up in country north of Jupiter Well in Western Australia. In 1999 Josephine contributed to the Kiwirrkura womensâ&amp;#x20AC;&amp;#x2122; painting as part of the Western Desert Dialysis Appeal. This painting relates to a venomous snake that lives at the soakage site of Nyinmi. The snake had travelled to Nyinmi from the lake site of Wilkinkarra (Lake Mackay, north of Kiwirrkura community.

â&amp;#x20AC;&amp;#x153;No matter how much I plan what I want to do with my pots, there are always surprises. My aim is always to create forms and surfaces that hint at landscapes, rain showers, skies, mountains. I do some of the work to obtain these results but the glaze always finishes it off and I can never totally predict how this will be. With these marbled pots I decided to let the clay give me some surprises too. I think I have always loved the element of chance. And of course I keep coming back to the landscape hidden in every piece!â&amp;#x20AC;? K.W, 2016

“My work explores my place in the world - as a woman; as an individual relating to others; as an artist working in the medium of ceramics. The focus of my work is to explore how the physical qualities of porcelain can evoke emotion and empathy in the viewer.”

Kylie Stillman’s introduction to art came from learning how to sew and her mother’s way of sewing – her resourcefulness and her frugality; making the most of every piece of cloth, every sheet of newspaper. She has often used thread in her work in the way a painter would use paint, and in her bottle drawings the three dimensional thread drawings float in the space defined by the shape of the bottle, like abstracted rigging from a model ship. Stillman loves reusing ordinary objects in extraordinary ways – “the purpose of purposeful repurposing”.