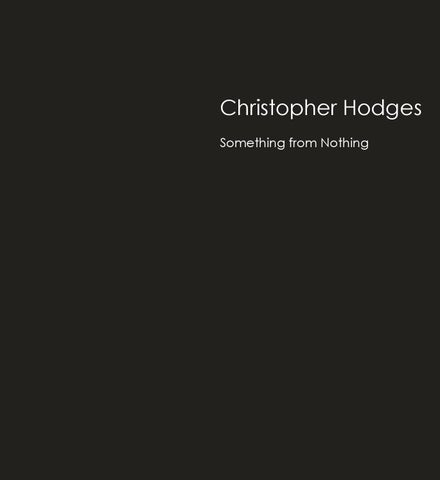 Christopher Hodges in Conversation Why ‘something from nothing’? Well, if you look at the sculptures that are in the exhibition you will see that in all of them the spaces are very important. They create something from nothing, because the positive form of the sculpture reveals something else that is in the negative form of the sculpture. When you look through these sculptures, what you see is just as important as the space that defines the sculpture. So it’s a yin yang sort of thing. And then at another level, a lot of the pieces are the second sculptures made from a single sheet of metal. They are, in a way, the left-overs – making something from nothing. Have you always used remnants in your work? I’ve often found that the bits you cut off are just as interesting as the bits that are left behind. I have used found objects in the past, so it’s not completely new, but in the last few years it’s been more purposeful. And why is that? As part of an artistic life you make things, and in your studio things lie around. Sometimes you completely discard things and you throw them in the bin, and other bits take your eye and you lean against the corner of a wall. Then one day you start playing with it and it becomes part of what you do. Then it changes again. Currently, I’m working on two new pieces, which won’t be in the show,

where I’ve actually set out at the beginning of the process to make two sculptures from one thing. Instead of designing the positive form first, I’ve actually designed the negative form first. Could you tell me a bit about the floral forms that are either the void or the figure, depending on how you want to look at it, in the works in this show? Well, I’ve always been interested in natural forms and I’ve always been interested in mathematics. We find the concepts of beauty and proportion in nature and in mathematics and all the time in great art, where we have things like the golden mean and the division of space by mathematical formula. When you see perfect proportions in nature, which are organic and never straight lines, or when you see them in architecture and art, there is a symmetry and discipline that evokes a feeling within you of balance and order and calm. In essence, the simplicity and elegance of the flower is something that all humans delight in and can empathise with. Flowers are organic mathematics I suppose and there is an organic symmetry to all of these pieces, but they are not just identical or mathematical, they are hand drawn curves, not repeated. When you have things that are almost the same but just slightly different, you get a dynamic between the two shapes, because your eyes are trying to balance. So in some of my works they look like they are turning and others look like they are almost dancing.

Could you explain how you make your sculpture? In the beginning, my sculptures started out as paintings and then I took the lines out of the paintings and I turned them into steel using a laser cutter and computer technology. But in recent years, I have started working out forms through drawing and plotting on pieces of graph paper. These forms are repeated, like the petals of a flower, but each line is hand drawn and therefore slightly different from the one next to it. I spend all my time with my pencil and my rubber, just tuning my line so it sits where I want it to be and when this process is finished I put it into a computer and turn it into a cad drawing. Then itâ&#x20AC;&#x2122;s cut out of steel, which arrives in raw shapes, and I have to assemble and refine. What I do depends on the fine details and so you have got to make sure that the curves run perfectly and feel right. You have got to tune your line right at the beginning, and at the end youâ&#x20AC;&#x2122;ve got to make sure it feels right. I think itâ&#x20AC;&#x2122;s important the sculpture rises effortlessly and sits poised and confidently, that the mixture of tension and balance are in equal parts, the positive and negative forms in dynamic harmony. If my sculptures were poems they would be haikus.

An exhibition of work by Christopher Hodges.

An exhibition of work by Christopher Hodges.