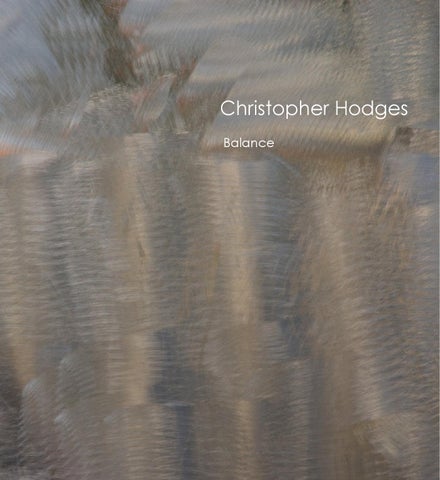 What makes a sculpture different from a painting? A simple question, perhaps… but it is one that goes to the heart of the modernist project and much that has come after. Well, you might say, a sculpture has volume whilst a painting is flat. A sculpture sits in space; it can be bumped into and walked around. A painting creates the illusion of space; it does so within the specific confines of a rectangle or square, usually hung upon a wall… As both a sculptor and painter, Christopher Hodges has always been interested in these distinctions, however fickle, and is well aware of the different tricks that each trade depends upon. Across the work in ‘Balance’, it could be argued that painterly devices become fodder for sculptural form, and vice versa. More and more, Hodges has honed the science of proportion, of balance, of symmetry, in the pursuit of essential forms that “can speak freely and truly”. As in much of Hodges’ sculpture, the majority of works in this exhibition are “flat”. In other words, they are three-dimensional planes. Viewed from the side, thin, climbing lines threaten to disappear altogether. Viewed from front on, some appear as silhouettes or shadows – black shapes against white walls. Others, in stainless steel, have an uncanny sense of depth built up out of layer upon layer of shimmering marks made with an angle grinder. These sculptures constantly shift with changing light, are of light – the yang of the black sculptures’ dimensionless yin.

Together, these forms seem to carve up space: as much about the spaces between as the things in themselves. It’s not surprising, then, that Hodges will often refer to his sculpture as ‘cut-outs’, a reference to Matisse’s paper collages, but also because they are ‘cut-out’ of steel, just as the final steel forms cut into air. Historically, many of Hodges’ sculptural works have retained a sense of the hand-drawn line, translated into three-dimensions. These sculptures are “actually a direct translation of paintings into space, the line into space…. I can do a freehand drawing of a line and the laser will make that same line in hard steel for me.” For instance, the looping lines of sculptures from the late 1990s register a gesture, marked first on a piece of paper. Whilst some have steel lines looping over and behind each other, others remain perfectly flat, depth denied at the points of intersection. As Hodges’ visual language has evolved his forms have continued to refine, the gestural merging with a precise, but organic geometry – loop becoming curve becoming the straight edges and sharp angles of this current exhibition. The painterly emerges in other ways – coloured light bouncing onto walls, shimmer of stainless steel. As his work progresses Hodges is always building upon what he has done before, seeing where familiar forms might lead him. To take a very literal example, the 2013 sculpture ‘Crow’, precursor to this most recent body of work, was constructed out of the pieces of steel left over from ‘Garden’ (pictured left), a large-scale cut-out playing angular edges against the curvilinear lines of a flower. In such works, the relationship between positive and negative space,

figure and ground, is paramount – that which is there and that which has been taken away. As Hodges says, “I’ve often found that the bits you cut off are just as interesting as the bits that are left behind. I have used found objects in the past, so it’s not completely new, but in the last few years it’s been more purposeful.” Beginning with remnants, Hodges began a series of sculptures that are eminently traceable to their origins in a sheet of steel. For instance, the three sculptures ‘Mona Lisa’, ‘Crooked Man’ and ‘Black Swan’ were all made from the same sheet, and a single shape repeated. Yet, each form has a distinct character, an anthropomorphic presence. Certainly, across all of the sculpture in this show, there is a strong sense of the body in space – standing, leaning, threatening to fall, each work performing a delicate balancing act around its centre of gravity. The painted black pieces in particular, resonate with Hodges’ work from the 1980s featuring the silhouetted figure of a (remarkably familiar!) man. In paintings, the figure would emerge from a deep space of layered, gestural washes. In other pieces, the figure would detach itself from the picture plane, to be found perched in windows or leaning against walls. At once corporeal and of shadows - the allure of the silhouette is its ambiguity: The figure could be waving at you or waving good-bye, it could be moving forward or backward. You have no idea whether it’s looking at you. I like that duality and I think it applies to these recent sculptures as well. If you look at them from the side, they are almost not there… These latest forms could be many things and can be read in multiple ways – painting and sculpture, flat and voluminous, light and dark, straight and

crooked, organic and geometric, man and machine. But in the end they are nothing but themselves – line, corner, angle, shape. It is this insistence on a direct visual language that makes Hodges’ work so powerful. It should come as no surprise that Hodges put this idea rather well himself, in an essay from the late 1990s on indigenous Australian art:1 When confronting any non-representational work of art our conscious mind attempts a translation of the signs and symbols to seek meaning. To limit ourselves to this simple translation is akin to literally translating each word in a poem from a foreign language. It is unconsciously that these works have their most profound effect, for beyond all the pragmatic references there is a direct visual statement being offered. My challenge has been to put words to things that belie them. “If my sculptures were poems they would be Haikus”, Hodges explained to me one afternoon. A handful of letters, a precise arrangement of syllables – Hodges’ work, too, draws upon a kind of syntax – forms placed in such a way that you might say they just “look right”. Line, angle, shape – letter, word, phrase. What could be simpler, or more complicated? The trick, of course, is the appearance of simplicity: a sculpture rising effortlessly from its base, inhabiting a space in such a way that it appears inevitable – a homecoming. Chloe Watson, 2014

1 In his parallel career as director of Utopia Art Sydney, Christopher has been a great advocate of, and friend to, many artists, both indigenous and non-indigenous. His belief in universal visual forms as a way of communicating across cultures has informed both aspects of his life.

An exhibition of sculpture by Christopher Hodges

An exhibition of sculpture by Christopher Hodges