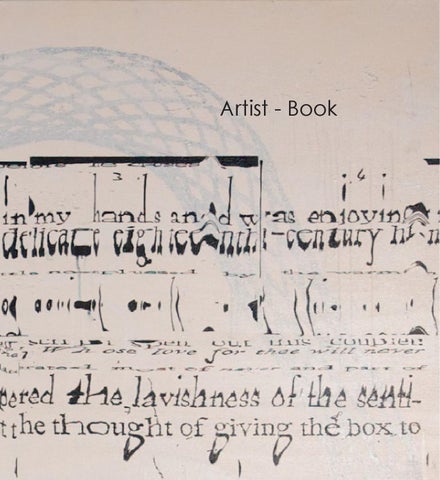 The concertina book is a kind of prototype for… an expanded view - two, four or six or more pages can be visible at any particular time, rather than the limited spread available in the traditional sketchbook…. Drawings can be treated as discrete statements or they can spread horizontally; episodic drawings and notations can be read singly or as a series of connected visual observations. The landscape is regarded as a whole, yet, at the same time, it is a journey through motifs – an unfolding. - Andrew Sayers

Leaves collected from a strand of Syzyium grande in the town of Linggi in Negeri Sembilan. The species were previously known as Eugenia grandis. Local names include jambu laut, jambu air; in translation, sea apple, sea water-apple or coastal water-apple. - Simryn Gill

There are so many ‘by chance’ links to be made – for example just grabbing a handful of books at random can form an accidental poem. What is of note and what connects them all is that they are ‘unwanted titles’. These books have had their useful life and been discarded; now I use them like you may use the reverse side of paper from the recycle bin for phone messages. - Kylie Stillman

Painting is a two dimensional surface presenting an illusion, and the illusion is created on the surface by the painterly techniques applied to it… There are all these things going on in the picture plane to create a scene for a drama to unfold… Whereas a sculpture is typically a hard thing that you can bump into and trip over, and it occupies space wherever you put it… but it also has its illusory capabilities, and that’s to do with its shape and its form, it’s not to do with its painterly dimensionality... The concertina book is somewhere in between. - Christopher Hodges

Man, the imperfect librarian, may be the product of chance or of malevolent demiurgi; the universe, with its elegant endowment of shelves, of enigmatical volumes, of inexhaustible stairways for the traveler and latrines for the seated librarian, can only be the work of a god. To perceive the distance between the divine and the human, it is enough to compare these crude wavering symbols which my fallible hand scrawls on the cover of a book, with the organic letters inside: punctual, delicate, perfectly black, inimitably symmetrical. - Jorge Luis Borges, The Library of Babel