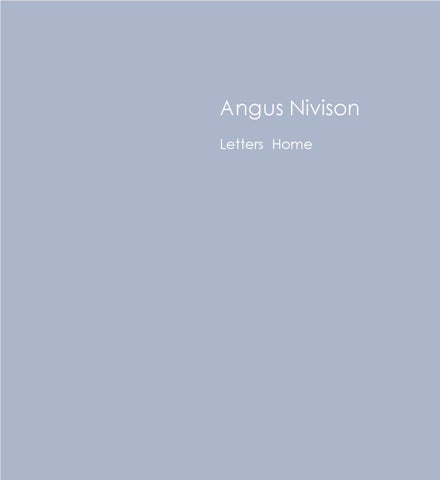 Australian artist Angus Nivison describes the creative process of memory as “the world seeping in and then coming out at a different time”, a phrase oddly reminiscent of the great English poet Wordsworth’s famous “emotion recollected in tranquillity”. For Nivison, it’s the introspective nature of memory, the voyeurism, the period of observing and reobserving and thinking, an almost sensual mulling over (sometimes over years), that leads to a finished painting. In October 2011, the artist and his wife Caroline took up a three-month residency in one of the Art Gallery of NSW studios in the Cite Internationale des Arts in Paris. Before leaving, Nivison promised his mother to write. A tender, almost archaic practice, handwritten letters. Also, realising the atelier would not be suited to large scale painting, he took favourite drawing paper with him – old letterhead, each 20 x 19.5 cm sheet stamped with the name and out-of-date phone numbers of the family grazing property where he lives in the New England region of NSW. The title of the resulting exhibition - Letters Home pushes us, the viewers, in certain philosophical and emotive directions: memory, nostalgia, homesickness, communication from one place to another place, from one time to another, from one person to another, from there to here. Nivison is not a 19th century artist poet. He has a mobile, macbook, kindle, plus two cool kids (one’s an eco architect and one’s a street/surf/skate artist) to ground him in the contemporary world. The oldfashioned romanticism of only making small drawings, born out of the perceived practical limitations of a confined studio space, was pretty brave. For the first couple of weeks Nivison could hardly do anything at all, almost paralysed under the weight of his own expectations.

“At first, I put a lot of pressure on myself… but then once I got into the drawing process I became absorbed by it, I almost didn’t want to leave the studio,” he says, allowing me to leaf through a humble recycled cardboard box of close to 60 drawings interleaved with pale pink acid-free tissue, the sum of three months work in Paris. These drawings in graphite and gesso and wash, fragile, delicate, intriguing in their own right, some quite figurative with tree branches and shadowy bridges, some near abstract compositions, pinned one by one on the walls of the Paris studio, led to the larger drawings and paintings made back at home in rural Australia over the 18 months that followed. “None of these are of any particular place in Paris at all, it’s just what happened when I was there for three months,” he says simply, of the larger works. “The one thing you didn’t see (in the box) is a drawing for that painting - because there isn’t one,” he elaborates, referring to the most literal canvas in the show: A Winter Memory, Paris. Spare and elegant, with echoes of Nivison’s very early pictures, there are traces of Giacometti (the three bare trees could almost be three elongated figures). “In the winter chill, you see the bones of things,” says Nivison. “When it got cold, the tourists just disappeared – going from the hustle and bustle to empty space, a lovely sense of loss which I adored. That’s when things started to happen for me.” There’s a wide range of technique and mood in the drawings and paintings, from refined, spare scribbles and lines of graphite to pure indigo and lush velvety bleeding acrylic (lolly pink, acid green, smoke). A range of inspirations and influences too: Paris at night, bridges over the Seine, the colour of limestone, escargot, camembert wrappers, skyscapes of scudding clouds and rain, slender trees in the Tuileries coming in to winter, passing landscapes seen from a train to Berlin; Turner, Monet, Giacometti, Cezanne, early Picasso, Cy Twombly, the two moons in Murakami’s novel IQ84; and remembered landscapes too, Australian landscapes, New England landscapes in particular, born

out of deliberate nostalgia and melancholic bouts of homesickness. The most radical painting in the show is Nightgarden, a trippy, topsy-turvy homage to Monet’s waterlily paintings, a mad dark velvety rainbow of drifting or falling colour. “It’s a little bit cosmos, a little bit deep Space as well,” Nivison says, as we look. We talk of British painter John Hoyland, Morris Louis stain paintings; Amy Winehouse and spray can street art. “There’s all the other lessons that I’ve learnt – there’s still the gorge country in there, but then there are these marks over the top,” Nivison points out. “It was one of those paintings that took me by the hand – I just had to go with it,” he says. “When I stood back, I was actually quite shocked.” Nightgarden and its more accessible twin, the highly charged Rumble (a gorgeous dramatic painting about stormy weather and approaching climate change) stand diametrically opposed to A Song, the major work in the exhibition. Four panels long, with brave sections of naked canvas, pure pigment, wash and delicate graphite, it outgrew even the biggest Yalgoolygum studio wall and covered over the door. (The first time I saw A Song I had to crawl underneath a panel, whisky in hand, to get in.) The genesis of the painting was a series of small pale drawings inspired by a sudden scudding of clouds and rain, seen through the atelier window with a view of the sky. “If I hadn’t gone to Paris I would never have figured it out,” Nivison states. “I wanted to do a follow-on from Remembering Rain (winner of the Wynne Prize in 2002) but I couldn’t think how to do it. I wanted to capture the fleetingness of how weather is. It (the painting) is planned to the nth degree but it looks very spontaneous.” A Song is informed by the sensibility of Chinese and Japanese landscape painting and Cy Twombly pictures seen in the Hamburger Bahnhof in Berlin, among other things. “A lot of this (A Song) was painted listening to Bach,” he adds. “I had

the little drawings which were a key to doing it, but because it was such a chancy painting I did bigger drawings so I could practice. It’s probably the most risky painting I’ve ever done.” There’s an underlying consistency here. Even when Nivison’s individual works seem very different, there’s a voice, a thumbprint, a subtle but powerful visual language at play. The willingness to experiment, to take risks, to fail, to put himself out there rather than settle into familiar patterns, to go “somewhere else” as he often says, marks him out as a painter. A recent survey exhibition of Angus Nivison’s work travelled from Tamworth Regional Gallery to Newcastle and culminated in a highly successful season at the SH Ervin Gallery, Sydney in January 2013. Audiences and critics responded. John McDonald termed the survey exhibition a “New Year’s Revelation” in a glowing review. People came back again and again to view these major canvasses and selected drawings and attend the program of lectures and conversations. Nivison’s heartfelt, lived, emotive and even spiritual explorations and evocations of landscape and memory, landscape and abstraction, absence and presence – the solace of rain, imagined mountains, last light – continue to strike a chord.

“An achingly sad beautiful painting will do it for me every time. It transfixes me. Part of me is trying to do that ….I was looking for beauty in this lot; I was not embarrassed by the sublime. Is that a fair comment?” It’ll do.

An exhibition of paintings by Angus Nivison