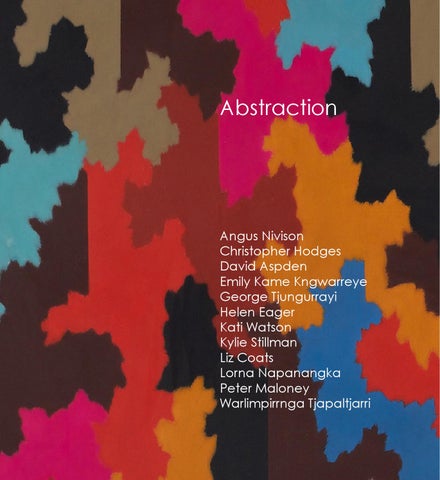 In one sense, abstraction is a way of looking. The works in this exhibition, whether by indigenous or non- indigenous artists, all demand an engagement with line and colour, the way shapes interact on a plane, the ability of subtle differences in tone to transform. Since its foundation in 1988, Utopia Art Sydney has been committed to the exhibition of indigenous and non indigenous artists alongside each other and on an equal footing. In this show abstraction forges a common thread between works that transcend traditional boundaries.

I enjoy looking at scatters of leaves on a path, and their assemblies in â&amp;#x20AC;&amp;#x2DC;perfectâ&amp;#x20AC;&amp;#x2122; formation when rain has splashed the gravel, or the apparent chaos, yet self-similarity, in accumulations of bark strips encircling a eucalypt trunk. Dyanmic forces like gravity, temperature and air currents, never static, affect their dispersal. I take observations like these into the studio, but do not try to illustrate them. While the collections of fragments in the Streaming paintings may at first appear random, and to an extent they are, I combine layers of paint into formations that bring to attention their associative detail.

George Tjungurrayiâ&amp;#x20AC;&amp;#x2122;s artistic vision is an innovative move away from an early Papunya Tula style, which was based more closely around the circle-path-meander of traditional ceremonial iconography from ground designs. His linear compositions flirt with abstraction yet also seem to recreate the extended lines of parallel sand ridges, or the ripples in water holes... His paintings enfold multiplicities, spanning time and space, the spiritual and the aesthetic, line and rhythm. They enfold us too, their humble spectators, into sensuous regions of undulating contours and nuanced tones.

During the last two decades my paintings have flaunted their ambivalent relationship with histories of abstract painting. While my works maintain some of the outward appearances of post-war abstraction I have always operated as an interloper, attempting in my way to subvert issues of robust masculinity with cut &amp; paste photocopy collage origins and dead-pan paint delivery.

Helen Eager will often begin a body of work by drawing. In the early noughties Eager’s new drawings began to accumulate on her studio walls. As the work developed, the pinned groups of drawings began taking on a life of their own. In 2005, Eager made the bold decision to exhibit these compositions pinned to the walls, just as they were in her studio. The show ‘New Directions’, indeed signalled the beginning of an exciting new phase in Eager’s career and fed directly into the large scale canvases of subsequent solo exhibitions and the vast wall painting at the Museum of Contemporary Art.

From the early 1980s, David Aspden visited many remote tribal communites, including New Britain in Papua New Guinea in 1981. He â&amp;#x20AC;&amp;#x153;began making work that referenced Indigenous Australian and Oceanic art, predominantly through its visual and aesthetic qualities rather than through any deep understanding of its cultural significance to its makers. In these works he created a personal totemic language of signs and incorporated earth-toned colour and pattern making.â&amp;#x20AC;? (Anne Ryan, David Aspden: The colour of music and place, 2011)

When Emily Kame Kngwarreye recevied a Creative Arts Fellowship in 1993, she announced she was giving up painting. Of course, it was not long before she was working again and began a series of long vertical panels that were dense with her signature daubs yet had the depth and lightness of an oriental scroll. She used a very large decoratorâ&amp;#x20AC;&amp;#x2122;s paintbrush, which she had spied while in Sydney. Here, the scale of her marks is the largest in her oeuvre. Not surprisingly, a group of these works was included in her retrospective at the Queensland Art Gallery in 1998 and again in her 2008 retrospective, which travelled from the National Museum of Australia to the National Art Centre in Tokyo and the National Museum of Art in Osaka, Japan. This painting was included in both exhibitions.

If one goes beyond the idea of these paintings being abstracted landscapes you begin to ‘feel’ their emotive power. You sense that the artist is dealing with more complex issues. In Nivison’s own words: “My work mostly deals with landscape, memory and the human condition. The paintings are really a personal dialogue. I offer the image and a title, it is then up to the viewer to complete the conversation.”

Christopher Hodgesâ&amp;#x20AC;&amp;#x2122; tilting sculpture extends upwards into space precariously, its radioactively pink form humming gently, lighting up the wall behind it. Here, Hodges uses the harmony of proportional geometry to create formal tension. 3 is the magic number in this sculpture, which is 3m tall, .3m wide and .03m deep. Whatâ&amp;#x20AC;&amp;#x2122;s more the sections of the form are perfect thirds, set at subtle angles that play with the relationships between symmetrical lines. When standing before this work, its mathematical intricacy may not be not readily apparent but its delicate visual balance is dizzying.

Warlimpirrnga Tjapaltjarriâ&amp;#x20AC;&amp;#x2122;s mesmeric, finely dotted fields are entirely unique, whlist also having an affinity with other Papunya Tula masters of minimalism, not the least his sister Yukultji Napangati. Both artists were amongst a family group who first made contact with white Australia when they walked into Kiwirrkurra in 1984. At this time, Warlimpirrnga was roughly 25 years old, and he began painting for Papunya Tula Artists three years later.

These works depict â&amp;#x20AC;&amp;#x153;the basic structural elements and gestures that make things things - the stroke that makes a painting, the scribble that makes a pen work, the notation that makes writing...â&amp;#x20AC;? Whilst they appear abstract, these works are also figurative - they are representations of marks.