Nova Quarterly: The University of Texas at El Paso 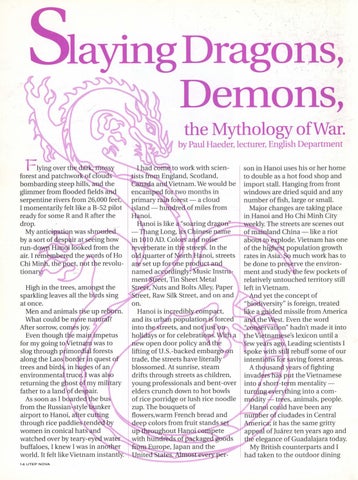 lying over the dar~ mossy forest and patchwor of clouds bombarding steep hills, and the glimmer from flooded fields an , serpentine rivers from 26,000 fee , I momentarily felt like a B-52 pilot ready for some R and R after the drop. My anticipation was shrouded by a sort of despair at seeing how an.oi oo ed from the run-do air. I reme be ed the words of Ho Chi Mi e revolutionary: High in the trees, amongst the sparkling leaves all the birds sing at once. Men and animals rise up reborn. What could be more natural? After sorrow, comes joy. Even though t e mai impetus for my going to ietnam was to slog through p imordial forests along the Laos border in quest of trees and birds in hopes of an environmental truce I was also returning the ghost my military father to a land of desP.air. As soon as I boarded , e bus from the Russian-style ounker airport to Hanoi, a ter cu ting through rice paddies tende by women in conical hats and watched over by teary-eye wate buffaloes, I knew I was in another world. It felt like Vietnam instantly. 14 UTEP NOVA

Jlad come to work with scien.sts from England, Scotland, Canada and Vietnam. We would be encamped for. two months in primary rain fat st- a cloud 路sland - hu dre of miles from anoi is like . &quot;soaring dragon&#39;J- Thang Long, its Chinese name in 1010 AD. Color amd nOise reverberate in the st eets. In the old quarter of North Hanoi, streets are set up for one productand named accoraingl : usic Instrument Street, Tin Sheet Metal Stree , Nuts and Bolts Alley, Paper S reet, Raw Silk Street, and on and on. Hanoi is incredibly compa t, and its urban population is forced into the streets, and not just on holidays or for celebrations. w路 a ew open door policy and the lifting ofU.S.-backed embargo on trade, the streets have literally blossomed. At sunrise, steam drifts through streets as children, young professionals and bent -over elders crunch down to hot bowls of rice porridge or lush rice noodle zup. The bouquets of flowers, warm French bread and eep colors from fruit stands set up hroughout Hanoi compete with hundreds of packaged goo s rp urope, Japan and the Uniteo States. Almost:every-per-

son in Hanoi uses his or her home to double as a hot food shop and import stall. Hanging from front windows are dried squid and any number of fish, large or small. Major changes are taking place in Hanoi and Ho Chi Minh City ......reekly. The streets are scenes out of mai and China -like a riot about to explode. Vietnam has one of the highest population growth rates in Asia. So much work has to be done to preserve the environment and studY&#39;the few pockets of relatively untouched territory still left in Vietnam. And yet the concept of &quot;biodiversity&quot; is foreign, treated r e a g ided missile from America and the West. Even the word &quot; o ervar on&quot; hadn&#39;t made it into the Vietnamese&#39;s lexicon until a few years ago. Leading scientists I spoke with still rebuff some of our intentions for saving forest areas. A thousand years of fighting invaders bas put the Vietnamese into a shor -term mentalityturning everything into a commodity- trees, animals, people. Hanoi could have been any nu ber of ciudades in Central Arfleric ; it has the same gritty appe of Juarez ten years ago and the elegance of Guadalajara today. My British counterparts and I had taken to the outdoor dining

Nova Quarterly: The University of Texas at El Paso