Printmaking Concepts: The Surprise at the "Other" End of the Press 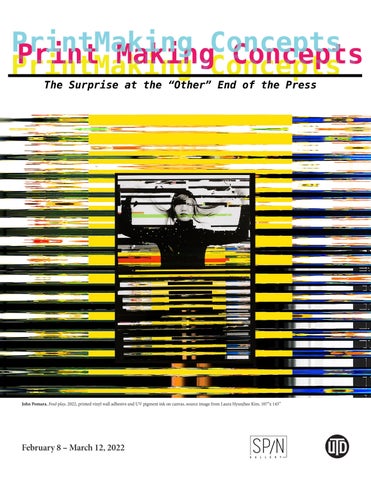 Printmaking Concepts: The Surprise at the “Other” End of the Press In 9th century China, monks carved wooden blocks and pressed ink onto paper to create wonders such as The Diamond Sutra Buddhist scroll. Following the advent of mechanical reproduction, all of text and image, with advertising and fine art, have been swept up into mixtures of hybrid visuals that comment on each other simultaneously.

What is the “other” end of the press? The traditional printmaker carefully inks and “wipes” a plate and places it ink side up on the press bed. With clean hands, they position specific paper over the plate, then carefully cover both with one blanket at a time, until the blankets are set. With the rolling of the wheel, the plate takes a horizontal trip under the roller of the press and settles on the other side. Whether it is the master printer who excels in perfection or the artist who invites experimentation, the anticipation of removing the blankets, then lifting the paper off of the plate is rewarding and addictive.

Artists Brian Scott, Ben Muñoz, Terri Thoman, Julie England and Una Scott engage in various traditional print methods such as monotype, woodcut, engraving, reduction linocut, silkscreen and intaglio. Each process can translate and completely transform an image from one technique to the next. While printmakers usually settle into a favorite specialty, they tend to excel in creating multiples (whether editioned works or serial variations.)

“The artist as a maker is left on one side of the press and the hands that peel the paper off the plate are the ones of the artist as observer. The surprise is further enhanced by the reversal of the image.” – William Kentridge, printmaker and multidisciplinary artist

Throughout history, the poster has used the print methods above to broadcast a variety of messages from the monetized to the makeshift, including political propaganda, protest art, underground zines and concerts. Matt Bagley’s Breussard advertises his frequent printmaking events as Iron Frog Press. Bagley shared with me recently that Breussard is a character that lives in the swamps of Louisiana with many frog friends. Breussard gave Bagley the idea for Iron Frog Press and the Print Frogs® (glass barens used for hand printing) that Bagley creates and sells.

My “other” end of the press refers to how artists throughout time have applied (or subverted) traditional printmaking concepts of process, material, variation, re-production and layers to refresh, mediate and investigate their own practice. Printmaking intertwines drawing, painting, sculpture, and photography; engages installation and technology; includes shareables and wearables (i.e. t-shirts); and brings attention to paper, substrate and scale. Technology has further expanded the field. This exhibit explores the inter-relationship of printmaking with all media, the impact on Contemporary Art, as well as fresh approaches regarding new and traditional printmaking concepts. Printmaking has long been a way to democratize the sharing of images and information. From inexpensive reproductions of famous books or paintings to Favianna Rodriguez’s digital shareables via QR code, the world of printmaking believes everyone should be able to afford a work of art and is a champion of community and accessibility. (It is appropriate that Rodriguez’s poster references migration without borders.) Community is also exemplified in print co-ops. Due to the expense and weight of good presses, printmakers often share press facilities. Represented in this exhibition are Dallas Artisan Fine Print Studio (Terri Thoman, Paper Arts); Familia Printshop (Ben Muñoz, Goldmark Cultural Center); Iron Frog Press (Matt Bagley); and Strange Powers Press (Taro Kun and Mylan Nguyen).

In multi-disciplinary artist Angela Faz’s video I am the Arkikosa, the story unfolds through the fluid dots, dashes and cut-out lines recognizable in linocut. Our point of view is as if we are peering over the shoulder of the artist leaning over the plate and cutting out the design. The special rhythms of patterned mark-making are distinctive in both Faz’s and Ben Muñoz’s work. Both artists convey a social activist message—printmaking as dynamic poster, messenger and street graffiti—using the jab of cutting into a substrate to dig out a relief upon which to roll-out ink. Painters have played with printmaking as extensions of their painting. Note how Julie England’s monotypes exploit the brush mark. Printmaking has also had associations with drawing and vice versa. The alluring value tones of intaglio’s mezzotint and aquatint (as in Brian Scott’s Seduction) share kinship to drawing sfumato. Drypoint exposes line. Lithography is known as the process that

Angela Faz, video still from I am the Arkikosa, 2021

Basic printmaking materials are ink, plate and paper. Each technique has a different “plate” substrate to carry the ink. Among them are wood, copper, aluminum, and linoleum. Paper carries a very important role in printmaking technique and the choices vary infinitely as does the ink recipes. Printmakers select the perfect pairing of image and paper type. Hong Hong’s work celebrates paper. Her herculean papermaking activity is an endeavor combining painting and sculpture, as well as the performance of smashed pulp, dye, and naturally occurring debris from her outdoor set-ups. Paper specificity and process continue with Liz Trosper’s conditional material loop. Described as “an impossible pairing—an image of plastic on plastic on plastic,” she refers to making “plastic paper” by painting many layers of acrylic (and one of cheesecloth) on rigid polypropylene; peeling it, trimming it, then coating it with a digital ground. When this “skin” is dry, she runs it through the press-like digital printer using a scanned image of her acrylic latex or silicon skein sculptures. The work is a playful pun on Han Hoffman’s “plasticity” in Search for the Real and Other Essays (1948)—engaging volume, space and plastic! Collaborators Allison Jauregui and xtine burrough, and the artist Zeke Williams take “the plate” and isolate it as art. Jauregui/burrough’s etched copper plate Tarot cards (altered in design to reflect the pandemic) could easily be mistaken for an inked intaglio plate. Copper is chosen for its natural antiseptic properties, enhancing their Tarot imagery impacted by the “virus.” Zeke Williams’ “woodcuts” could be leftover stained woodblocks. Davis Mountains from the North, demonstrates his interest in the inherent artistry of tools, marrying the bucolic imagery of traditional Japanese woodblock prints with the rugged aesthetic of the American landscape. The CMYK system of building an image through layers of Cyan, Magenta, Yellow and Black creates an optical illusion of depth, light or a wide range of additional colors. Matt Bagley’s Breussard exemplifies strategic and masterful use of the CMYK process in a traditional print. Ben-Day dots or Halftone are the CMYK system used in commercial printing and silkscreen. American Pop artist Roy Lichtenstein (1923-1997) placed them in his painting as a reference to commercial printing. We recognize these Ben-Day dots in Brent Ozaeta’s densely magical silkscreens and paintings. Krista Chalkley’s layered tulle fabric creates its own CMYK system. Her curtain-like object invites light and translucent optic interplay.

feels the most like charcoal drawing (but involves a lot of chemistry.) The multi-disciplinary artist Kristen Cochran has a background in printmaking and is familiar with all of these techniques. In her print-assisted drawing, Reach, she uses her rolling body as the press, engaging the gesture of stamping or pressing to transfer charcoal residue from a military-grade neuro biochemical warfare suit onto a wet paper surface. The detail image provided here illustrates how the lush grey tones evoke the pitted, acid-etched grain of an aquatint. Reach’s figurative dance follows Cochran’s artistic themes of flow, time, manual work, memory and transformation. The identity of the warfare suit suggests a macabre or tortured figure. Similar to Cochran, artist Paul Klee (1879-1940) made transfer drawings. His, however, were made by placing his paper over wet ink and pressing a linear gesture on the back. The blind drawing appears on the side of the paper leaning into the ink. Lifted off of the ink, the drawing appears with beautiful “plate tone.” Plate tone refers to the wiping of an intaglio or drypoint plate. First, ink is loaded into etched or scratched crevasses in an aluminum or copper plate. Before running the plate through the press (where the ink is forced out of the crevasses) the flat surface of the plate is wiped perfectly clean—or not—leaving plate tone.

The Risograph is like a fancy xerox machine with a unique CMYK process. Strange Powers Press artists Annie Nguyen, Mylan Nguyen and Taro Kun/Fantasy Boy Taro carry the distinctive palette of the Risograph in their works. Their Zines share printmaking’s heritage with printed matter and comic books. Note the Ben-Day dots and visible layers of the Risograph works. Many printmakers agree that “layers” or multiple runs through the press add to the integrity of a printed image. It is intriguing to note that Una Scott’s Reduction Linocut Brother and Sister went through an astounding 39 layers to build the resultant image (see her works-inprogress image examples.) When layers are sloppily registered (in commercial printing or other printing), color layers can go “out of the lines” and lead to the most beautiful “bad registration.” Printmaker, painter and graphic designer Maedeh Asgharpour’s painting Mana chooses to mimic the intentional “bad registration” inherent in her illustrative prints which often serve as the direct sources for her paintings. Photography and printmaking have a long and interconnected relationship. Christopher Blay’s cyanotypes are an alternative photographic process evoking the free brushstrokes of monotype, the chemical wizardry of lithography and the photographic negative used in photogravure (all printmaking techniques.) An architect’s blueprints are cyanotypes. The color blue inherent in cyanotypes is often emotive, and the process, as stated in Blay’s press release for these works, involve “sunlight from the anniversary day of police killings.” Contemporary art has been impacted by the growth of enhanced digital printing technology. Printmaking’s photogravure process now has a similar but different relative: the archival pigmented print or UV ink on canvas. How ink is transferred to a substrate is now a technology and can be seen as the mechanical hand of painting. Steven Baris, John Pomara and Liz Trosper explore within this new arena.

Steven Baris’s digital print Exurban Archipelago P1 blends sources from his painting, drawing and photography. His work reminds us of printmakers who ignore the single rectangular plate and choose instead to arrange multiple plates for printing a complex shape. Baris’s composition of lines, pathways and architectural elements lead us around his visual image. They also conceptually invite us inside the common, yet austere, public building. John Pomara’s exponentially scaled work blends digital painting and photography. He engages one of design theorist Wucius Wong’s Variations of a Form strategies: “extend, add, layer.” Chine-collé is the traditional “add, layer” process of adhering colored paper to a printed work on paper. Pomara’s work echoes a type of chine-collé layer with the wall as substrate. He reminds us of contemporary printmakers who explore going beyond the boundaries of the embossed plate edge, extending imagery into the surrounding paper frame. Yet Pomara’s work of art is decidedly a digital painting installation. Foul-play challenges the boundaries of glitched reproduction and pushes various visual tensions within the interactions of layered imagery. Also utilizing digital painting and new “extend, add, layer” principles, is Trosper’s sqeezray, a combination scanner painting, animation and augmented reality app. It exists not only on the wall but within the smartphone app as a moving video image. She describes the making of the animation as “many plates in motion” as she multiplies, carves, alters, subtracts and draws back into various image layers. The digital painting “goes into the app and is pressed into bits and bits of code, then activated by someone picking up the phone and looking at it.” This “other” side of the press point of view still yields surprises, not necessarily reversing the image (as William Kentridge noted) but opens up brand new visions to explore. Lorraine Tady, Curator Associate Professor of Instruction, Visual Art

Printmaking Concepts: The Surprise at the "Other" End of the Press