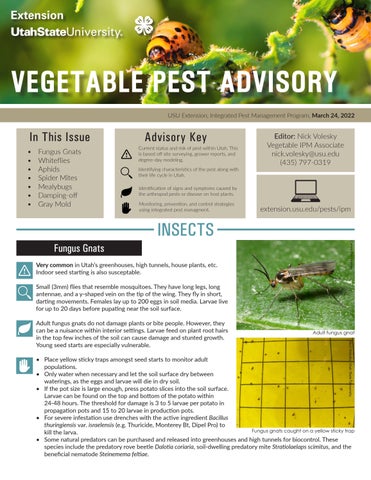 Advisory Key Current status and risk of pest within Utah. This is based off site surveying, grower reports, and degree-day modeling. Identifying characteristics of the pest along with their life cycle in Utah.

Small (3mm) flies that resemble mosquitoes. They have long legs, long antennae, and a y-shaped vein on the tip of the wing. They fly in short, darting movements. Females lay up to 200 eggs in soil media. Larvae live for up to 20 days before pupating near the soil surface.

Adult fungus gnats do not damage plants or bite people. However, they can be a nuisance within interior settings. Larvae feed on plant root hairs in the top few inches of the soil can cause damage and stunted growth. Young seed starts are especially vulnerable.

• Place yellow sticky traps amongst seed starts to monitor adult populations. • Only water when necessary and let the soil surface dry between waterings, as the eggs and larvae will die in dry soil. • If the pot size is large enough, press potato slices into the soil surface. Larvae can be found on the top and bottom of the potato within 24-48 hours. The threshold for damage is 3 to 5 larvae per potato in propagation pots and 15 to 20 larvae in production pots. • For severe infestation use drenches with the active ingredient Bacillus thuringiensis var. israelensis (e.g. Thuricide, Monterey Bt, Dipel Pro) to Fungus gnats caught on a yellow sticky trap kill the larva. • Some natural predators can be purchased and released into greenhouses and high tunnels for biocontrol. These species include the predatory rove beetle Dalotia coriaria, soil-dwelling predatory mite Stratiolaelaps scimitus, and the beneficial nematode Steinemema feltiae.

Very common in greenhouses and high tunnels throughout Utah.

The two most common species are the greenhouse whitefly and the silver leaf whitefly. Females lay up to 250 oblong eggs on the undersides of leaves. Nymphs resemble scale crawlers in that they are immobile, flat, and translucent. Large populations can cause leaves to turn yellow, appear dry, or drop. Adult whiteflies Florida Department of Agriculture and Consumer Services, Bugwood.org

Whiteflies use their piercing, straw-like mouthparts to suck sap from phloem on plant stems and leaves. Large populations can cause leaves to turn yellow, appear dry, or drop. Feeding can cause plant distortion or discoloration. Whiteflies excrete honeydew, causing leaves to be sticky or covered with black, sooty mold that grows on honeydew (Murray 2017).

• Monitor whitefly populations by hanging yellow sticky traps. • Inspect plant material for whitefly infestations before bringing new plants into a greenhouse. • Use screens for greenhouse openings such as doors, vents, and windows. This will exclude whiteflies entering from the outside environment. Whitefly nymphs • Remove plant residues and weeds from the greenhouse and high tunnels as they can serve as alternate hosts for whiteflies. • There are several conventional and organic pesticides are labeled for whitefly control. They include active ingredients such as horticultural oils, pyrenthrin, azadirachtin, bifenthrin, cyfluthrin, and acephate. Always review product labels for instructed use. • Some natural predators can be purchased and released into greenhouses for biocontrol. These species include the predatory mite Amblyseius swirskii, predatory beetle Delphastus catalinae, and parasitic wasps Encarsia formosa and Eretmocerus eremicus. • Consider allowing a “crop-free period” inside the greenhouse to “break” the life cycle of whiteflies by removing their food sources.

Aphids are small, plant-feeding insects in the order Hemiptera (the “true bugs”). Like all true bugs, aphids have a piercing-sucking mouthpart. In general, aphids are pear-shaped, soft-bodied, and possess a characteristic pair of cornicles on the posterior end of their abdomen, allowing for easy identification. The life cycle of aphids is complex and can vary among species. In general, aphids overwinter as eggs. In the spring, eggs will hatch into first instar nymphs and are usually all females. They will begin to Aphid found inside a greenhouse feed on host plants and will grow into subsequent nymphal stages. There are four nymphal stages before molting into the adult stage. The complete development of aphids can be very short, sometimes only taking a few days to hatch and grow to the adult stage. High tunnels create a protected environment that also extends the growing season. These ideal conditions are great for production but also favorable for aphid pests. Inside high tunnels, there tend to be both winged and wingless forms of aphids. They are often all asexually reproducing females. Monitoring for aphids should happen weekly throughout the season, from the seedling stage through harvest.

• Visually inspect plants for aphid colonies, feeding symptoms on growing tips, and curled leaves. Most aphid species prefer the undersides of leaves, so be sure to turn foliage over when scouting. Use a 10-20x hand lens for species identification. • Spray a strong stream of of water at colonies to kill of popuations. • Look for small white flakes (sometimes mistakenly identified as whiteflies), which are the molted skins of aphids. • Place yellow sticky traps to monitor for the presence of winged aphids. Place traps 4–6 inches above susceptible host plants. Colony of aphids on the underside of a leaf • Monitor plants for various symptoms of viruses. Vegetable viruses vectored by aphids include alfalfa mosaic virus, cucumber mosaic virus, potato virus Y, and watermelon mosaic virus. • Look for a sticky substance called honeydew on leaves’ stems. This secretion can also attract ants, which feed on it. • Prevent aphids by removing weeds and volunteer crops that can serve as aphid hosts. • Encourage natural enemies. Plant strips of yarrow, alyssum, herbs, and other plants with small, attractive flowers that provide nectar and pollen for beneficial insects. However, this may take up space inside the high tunnel for cash crop production. • Organically approved insecticides include insecticidal soap and oils (petroleum, mineral, canola, clove, garlic, rosemary, and neem). Oil and soap sprays kill aphids on contact by physical means (suffocation and disruption of waxes in the exterior cuticle), so thorough coverage is essential for good efficacy. • Several natural predators feed on aphids. It is important to scout for these predatory and parasitic insects and eggs in and around your high tunnels. These natural predator populations can maintain aphids at low levels. However,predators will only show up if a food source exists, so there can be a lag time between the appearance of the aphids and the appearance of predators. • Manage nitrogen levels, high levels of nitrogen fertilizers tend to encourage aphid reproduction. Use several, sta gered applications of lower concentrations of nitrogen rather than a single high dose. Also, use delayed-release

Very common in Utah’s greenhouses, high tunnels, house plants, etc. Mealybugs are very small (3 mm), soft-bodied, oval-shaped insects that are covered with a white, powdery wax coating. Depending on the species, the waxy coating may belong to projections or short tufts. Females lay up to 600 eggs in a cottony sac beneath their bodies. Crawlers are yellowish and waxless. Upon settling, mealybugs are mostly immobile, and form clustered colonies on the plant (Murray 2017).

• Conduct visual inspections regularly. Look for white flecks or cottony residues along the leaf midribs, on leaf stem axils, on the underside of leaves, and near the base of plants. Honeydew, sooty mold, and the presence of ants may also be an indication of a mealybug infestation. Controlling ants allows parasites and predators to attack mealybugs (Murray 2017). • Different insecticides may be required at different stages in the life of mealybugs. Examples of effective ingredients include acephates, Mealybug destroyer feeding on mealybugs azadirachtin + pyrethrins, or chlorpyrifos + cyfluthrins. • Some natural predators can be purchased and released into greenhouses and high tunnels for biocontrol. These species include lacewings, mealybug destroyers (Cryptolaemus montrouzieri), the parasitic wasps Anagyrus pseudococci, and Leptomastix dactylopii. 3

OTHER ARTHROPODS Very common in Utah’s greenhouses, high tunnels, house plants, etc. There are several species of spider mites in greenhouses, with twospotted being most common. They require a hand lens (20x) to see and mostly feed on the undersides of leaves. They are oval-shaped and cream-colored. The body contains two large, dark, visible spots that are an accumulation of body wastes. Young mites may lack the spots. Populations increase rapidly in hot, dry conditions (Murray 2017).

Mites feed by piercing leaf cell walls with their mouthparts and sucking out the contents of the cell, causing them to become non-functional. Leaves become stippled, and with heavy feeding, will appear chlorotic overall with some dieback. Plant growth will decline (Murray 2017).

• Monitor by conducting visual inspections. Look for leaf discoloration and inspect the undersides of leaves for spider mites. • There are several conventional and organic pesticides (miticides) labeled for mite control. They include active ingredients such as pyrethrins, insecticidal soaps, plant-based oils, abamectin, etoxazole, chlorfenapyr, and spiromesifen. (Avoid over-application as mites may develop resistance and beneficial predators may be affected) • Some natural predators can be purchased and released into Spider-mite damage on kale seedlings greenhouses for biocontrol. These species include the predatory mites Amblyseius andersoni, Galendromus occidentalis, Neoseiulus californicus, Neoseiulus fallacis, Phtoseiulus persimilis, predatory gall midge Feltiella acarisuga, and the spider mite destroyer Stethorus punctillum.

DISEASES Very common in Utah’s greenhouses, high tunnels, house plants, etc. Indoor seed starting is also susceptable. Damping-off is a term used to describe the disease in seedlings caused by various soil-borne fungi including the genera Pythium, Rhizoctonia, Fusarium, and Phytophthora. The pathogens can be found in small amounts of soil (including on reused seed trays and benches). Once the seed is planted and watered, fungal spores or mycelium will start to colonize the soil in within the trays.

• The chance of having an outbreak of dampingoff is increased when seedlings are kept very wet, therefore avoid excessive irrigation and standing water. • When working in a greenhouse, sterilize surfaces along with growing containers with disinfectant products. Examples of effective products include those with active ingredients such as quaternary ammonium compounds, hydrogen dioxide, hydrogen peroxide + peroxyacetic acid, and chlorine bleach. Always review product labels for instructed use. Utah Vegetable Pest Advisory, USU Extension

Damping-off kills newly germinated seedlings. Infections cause the lower stem to turn brown/black and fall over. Circular bare spots may also occur in seed flats. Once the seed is planted and watered, fungal spores will start to colonize the soil in that tray.

• If the disease is present, remove infected plants and soil. Closely monitor nearby seedlings for infection spread. • Source cleaned sterilized soil media. • Purchase treated seeds with fungicides such as thiram.

Gray (Botrytis) Mold Rare/sporadic in Utah’s greenhouses and high tunnels. Gray mold is caused by the fungus Botrytis cinerea. It overwinters on crop debris. Under the right conditions (cool and humid), it will cause infection of all plant parts and produce thousands of spores that initiate new infections. It is most prevalent in high tunnels, cool greenhouses, and tightly packed fields. Plants are most susceptible if they are damaged or have senescing tissue.

Symptoms of infection can vary depending on the host. Typically gray masses of mycelium may be visible. When distrubed, large dust-like clouds will relase spores. Remove infected plants immediately from the area. Avoid injury to the plant tissue. Limit overhead irrigation so plant leaves do not remain wet. Use fans inside greenhouses to reduce humidity. Consider fungicides labeled for gray mold control (e.g. Rovral, Triology (neem oil), other biologicals).

Sanitation of high tunnels and greenhouses is critical for healthy plant production. Eliminate all the weeds in and around the structure as they can serve as an alternate host and overwintering site for both arthropod pests and disease pathogens.

Precautionary Statement: Utah State University Extension and its employees are not responsible for the use, misuse, or damage caused by application or misapplication of products or information mentioned in this document. All pesticides are labeled with ingredients, instructions, and risks. The pesticide applicator is legally responsible for proper use. USU makes no endorsement of the products listed herein.

Vegetable pest advisory for Utah's commercial and small-urban farmers along with home gardeners. This advisory covers current arthropod and diseases posing a risk to the region's vegetable production. 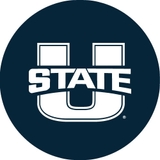