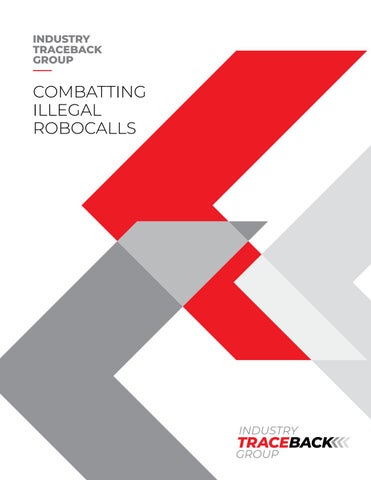 INTRODUCTION + SUMMARY Since USTelecom – The Broadband Association established the Industry Traceback Group (ITG) in 2015, the ITG has played a central and ever-growing role in the battle against illegal robocalls. 4 Each day the ITG traces back dozens of illegal robocall campaigns to their source and seeks to stop them there. The campaigns targeted by the ITG range from burgeoning robocall scams seeking to prey on fears related to the COVID-19 pandemic to government and brand impersonations to telephony denial of service (TDoS) attacks on hospitals and public safety phone lines. ITG tracebacks rely on the cooperation and collaboration of hundreds of domestic and foreign voice service providers, including the over forty ITG members that support the effort. The ITG also works in close partnership with government entities who rely on ITG referrals and data to bring those individuals and entities responsible for illegal robocalls to justice. The ITG was designated by the Federal Communications Commission (FCC) in July 2020 to fulfill the role of the official Congressionallymandated traceback consortium. 5

BILLION EACH YEAR While fraudulent robocall schemes cost Americans about

SINCE 2015, the ITG, a collaborative effort of voice service providers from across the wireline, wireless, VoIP, and cable industries, has been actively tracing and identifying the source of illegal robocalls. The ITG provides a neutral coordination platform for voice service providers to trace and identify the source of illegal robocalls and protect consumers from fraudulent, abusive, and/or unlawful robocalls.

ITG membership increased to over 40 voice service provider supporters The origination, delivery, and termination of robocalls involves numerous voice service providers in a complex ecosystem. Using a secure traceback portal, suspected illegal robocalls are traced systematically back through various networks until the ITG identifies the originator of the suspicious calls, where the calls entered the United States if internationally originated, and often the identity of the calling party. Since providers only know who they received a call from and where they routed it, the ITG traces the call back from the recipient to the caller—usually routing through 4 or more, or sometimes as many as 9 or 10 service providers (or “hops”) across the globe. With billions of calls traversing the networks of hundreds of interconnected companies, providers historically had limited insight into exactly what role they played, and to what extent, in the illegal robocalling problem—and in turn, what actions they could take to address it. The ITG’s centralized traceback process itself has changed that. Upon receipt of a traceback notice, a provider now has information it can act on: the provider learns

TRACING BACK A CALL ››› from caller to recipient

THE ITG TRACES the call back from the recipient to the caller—usually routing through 4 or more service providers (or “hops”) across the globe.

In 2020, average time to complete a traceback fell by over

Average time to complete an individual hop is now LESS THAN

Many providers regularly respond in less than

IN 2020 THE ITG: about the illegal robocalls flowing through its network and can engage with the provider or customer providing that problematic traffic. In turn, providers have built processes and practices based on this new information. Thought-leading voice service providers modified contracts to incorporate traceback amendments, engaged with upstream voice service providers to identify and halt illegal traffic, and refined their customer and partner vetting process. Some implemented new technology that monitors calling traffic for suspicious patterns in real time and/or via automated post-call analysis. The ITG’s primary focus is high-volume illegal robocall campaigns, but it also successfully conducts tracebacks on lower volume, but equally or even more harmful campaigns, such as telephony denial of service (TDoS) attacks, social engineering attempts, and safety-of-life threats to individuals. The ITG’s operations are managed by a small team of employees and contractors who work daily with numerous industry and government partners to identify sources of illegal robocalling campaigns. The team initiates and monitors the tracebacks, on-boards new providers that have not previously participated in tracebacks, and addresses specific questions or requests from individual providers, in addition to providing regular reports to ITG members and hosting virtual meetings for the industry to discuss best practices, trends, and regulatory activity. The ITG team routinely collects and analyzes data about evolving illegal robocall patterns and their sources and collaborates with government agencies that rely on this information to bring enforcement against the perpetrators. The team also makes the data available to ITG members to help them make informed decisions about the traffic they carry over their networks.

3 Initiated more than 2,500 tracebacks, representing hundreds of millions of calls.

▶ FCC Enforcement Bureau Chief Rosemary Harold called the ITG “a vital partner in [the FCC’s] pursuit of unlawful robocallers” in announcing the ITG’s selection as the official U.S. traceback consortium.12

▶ Then-FCC Chairman Ajit Pai cited the “collaborative and ongoing effort between our own Enforcement Bureau staff and experts from the USTelecom Industry Traceback Group.”8 He further emphasized how “collaboration across government and with industry can bring robocallers to justice.” 9 ▶ Then-Federal Trade Commission (FTC) Chairman Joseph Simons said that the ITG “is very effective and we are overjoyed with their progress.” 10

▶ And in a late 2020 report to Congress, the FCC reported that ITG tracebacks have “accelerated the investigation process,” allowing “a traceback that would have taken at least four separate subpoenas and 2 to 3 months to complete … successfully traced back in less than 24 hours.” 13 The ITG continues to increase the scale and scope of tracebacks it performs, increasing the total volume of tracebacks and actively working to focus on truly fraudulent calls.

▶ In a letter to USTelecom CEO Jonathan Spalter, the National Association of Attorneys General and 52 state Attorneys General wrote, “…[M]ultiple state attorneys general have issued subpoenas or civil investigative demands to the ITG and received valuable information for their investigations. In short, the partnership between the ITG and the state attorneys general is a crucial one, and we endeavor to strengthen it.” 11

The ITG’s operations are managed by a small team of employees and contractors who work daily with numerous industry and government partners to identify sources of illegal robocalling campaigns.

Michigan Attorney General becomes first state authority to permanently shut down a VoIP service provider and bar its ownership from working in the industry.

In its sixth year—and first full year since being designated as the official U.S. registered traceback consortium—the ITG intends to build on its foundation and success to date. The ITG is looking to expand its partnerships with enterprises and other organizations that are victims of brand impersonation and other illegal robocall activity, as well as enhance the ways it supports voice service providers and government entities in their efforts to hold illegal robocallers and those that enable them accountable.

time › Average to complete a

traceback fell by over 50% to approximately 4 days

actions against nearly 50 individuals and entities