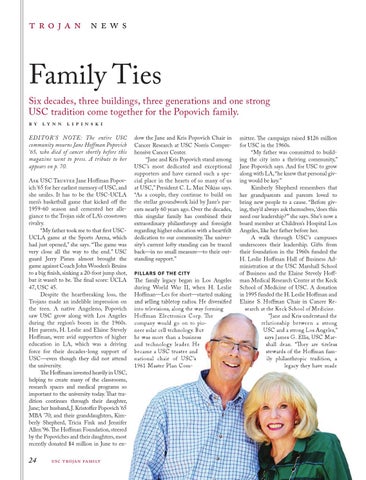 Six decades, three buildings, three generations and one strong USC tradition come together for the Popovich family. by lynn lipinski

EDITOR’S NOTE: The entire USC community mourns Jane Hoffman Popovich ’65, who died of cancer shortly before this magazine went to press. A tribute to her appears on p. 70. Ask USC Trustee Jane Hoffman Popovich ’65 for her earliest memory of USC, and she smiles. It has to be the USC-UCLA men’s basketball game that kicked off the 1959-60 season and cemented her allegiance to the Trojan side of LA’s crosstown rivalry. “My father took me to that first USCUCLA game at the Sports Arena, which had just opened,” she says. “The game was very close all the way to the end.” USC guard Jerry Pimm almost brought the game against Coach John Wooden’s Bruins to a big finish, sinking a 20-foot jump shot, but it wasn’t to be. The final score: UCLA 47, USC 45. Despite the heartbreaking loss, the Trojans made an indelible impression on the teen. A native Angeleno, Popovich saw USC grow along with Los Angeles during the region’s boom in the 1960s. Her parents, H. Leslie and Elaine Stevely Hoffman, were avid supporters of higher education in LA, which was a driving force for their decades-long support of USC—even though they did not attend the university. The Hoffmans invested heavily in USC, helping to create many of the classrooms, research spaces and medical programs so important to the university today. That tradition continues through their daughter, Jane; her husband, J. Kristoffer Popovich ’65 MBA ’70; and their granddaughters, Kimberly Shepherd, Tricia Fink and Jennifer Allen ’96. The Hoffman Foundation, steered by the Popoviches and their daughters, most recently donated $4 million in June to en-

dow the Jane and Kris Popovich Chair in Cancer Research at USC Norris Comprehensive Cancer Center. “Jane and Kris Popovich stand among USC’s most dedicated and exceptional supporters and have earned such a special place in the hearts of so many of us at USC,” President C. L. Max Nikias says. “As a couple, they continue to build on the stellar groundwork laid by Jane’s parents nearly 60 years ago. Over the decades, this singular family has combined their extraordinary philanthropy and foresight regarding higher education with a heartfelt dedication to our community. The university’s current lofty standing can be traced back—in no small measure—to their outstanding support.” PILLARS OF THE CITY The family legacy began in Los Angeles during World War II, when H. Leslie Hoffman—Les for short—started making and selling tabletop radios. He diversified into televisions, along the way forming Hoffman Electronics Corp. The company would go on to pioneer solar cell technology. But he was more than a business and technology leader. He became a USC trustee and national chair of USC’s 1961 Master Plan Com-

mittee. The campaign raised $126 million for USC in the 1960s. “My father was committed to building the city into a thriving community,” Jane Popovich says. And for USC to grow along with LA, “he knew that personal giving would be key.” Kimberly Shepherd remembers that her grandparents and parents loved to bring new people to a cause. “Before giving, they’d always ask themselves, ‘does this need our leadership?’” she says. She’s now a board member at Children’s Hospital Los Angeles, like her father before her. A walk through USC’s campuses underscores their leadership. Gifts from their foundation in the 1960s funded the H. Leslie Hoffman Hall of Business Administration at the USC Marshall School of Business and the Elaine Stevely Hoffman Medical Research Center at the Keck School of Medicine of USC. A donation in 1995 funded the H. Leslie Hoffman and Elaine S. Hoffman Chair in Cancer Research at the Keck School of Medicine. “Jane and Kris understand the relationship between a strong USC and a strong Los Angeles,” says James G. Ellis, USC Marshall dean. “They are tireless stewards of the Hoffman family philanthropic tradition, a legacy they have made

Data on the Brain (USC Stevens Neuroimaging and Informatics Institute researchers seek answers in their images. The target: diseases like Alzheimer’s.); The Promise (Getting their degree is the ultimate second act for Trojans returning to USC after a professional sports career.); Mind the Map (Experimental maps are transforming how we navigate and understand our world.); Write On! (Distinguished authors forecast the future of storytelling in a new digital world. Spoiler alert: It thrives.) 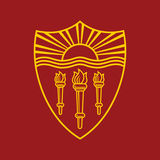 More from University of Southern California