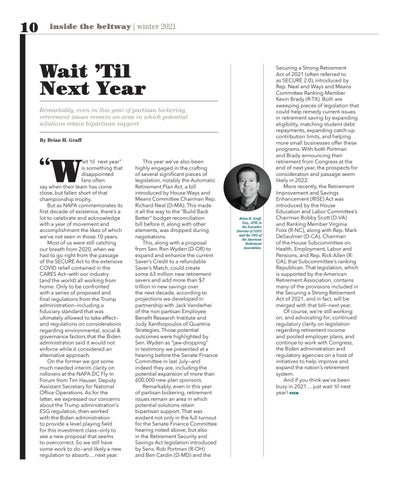 Wait ’Til Next Year Remarkably, even in this year of partisan bickering, retirement issues remain an area in which potential solutions retain bipartisan support. By Brian H. Graff

’ait ’til next year” is something that disappointed fans often say when their team has come close, but fallen short of that championship trophy. But as NAPA commemorates its first decade of existence, there’s a lot to celebrate and acknowledge with a year of movement and accomplishment the likes of which we’ve not seen in those 10 years. Most of us were still catching our breath from 2020, when we had to go right from the passage of the SECURE Act to the extensive COVID relief contained in the CARES Act—with our industry (and the world) all working from home. Only to be confronted with a series of proposed and final regulations from the Trump administration—including a fiduciary standard that was ultimately allowed to take effect— and regulations on considerations regarding environmental, social &amp; governance factors that the Biden administration said it would not enforce while it considered an alternative approach. On the former we got some much needed interim clarity on rollovers at the NAPA DC Fly-In Forum from Tim Hauser, Deputy Assistant Secretary for National Office Operations. As for the latter, we expressed our concerns about the Trump administration’s ESG regulation, then worked with the Biden administration to provide a level playing field for this investment class—only to see a new proposal that seems to overcorrect. So we still have some work to do—and likely a new regulation to absorb… next year.

This year we’ve also been highly engaged in the crafting of several significant pieces of legislation, notably the Automatic Retirement Plan Act, a bill introduced by House Ways and Means Committee Chairman Rep. Richard Neal (D-MA). This made it all the way to the “Build Back Better” budget reconciliation bill before it, along with other elements, was dropped during negotiations. This, along with a proposal from Sen. Ron Wyden (D-OR) to expand and enhance the current Saver’s Credit to a refundable Saver’s Match, could create some 63 million new retirement savers and add more than $7 trillion in new savings over the next decade, according to projections we developed in partnership with Jack Vanderhei of the non-partisan Employee Benefit Research Institute and Judy Xanthopoulos of Quantria Strategies. Those potential outcomes were highlighted by Sen. Wyden as “jaw-dropping” in testimony we presented at a hearing before the Senate Finance Committee in last July—and indeed they are, including the potential expansion of more than 600,000 new plan sponsors. Remarkably, even in this year of partisan bickering, retirement issues remain an area in which potential solutions retain bipartisan support. That was evident not only in the full turnout for the Senate Finance Committee hearing noted above, but also in the Retirement Security and Savings Act legislation introduced by Sens. Rob Portman (R-OH) and Ben Cardin (D-MD) and the

Brian H. Graff, Esq., APM, is the Executive Director of NAPA and the CEO of the American Retirement Association.

Securing a Strong Retirement Act of 2021 (often referred to as SECURE 2.0), introduced by Rep. Neal and Ways and Means Committee Ranking Member Kevin Brady (R-TX). Both are sweeping pieces of legislation that could help remedy current issues in retirement saving by expanding eligibility, matching student debt repayments, expanding catch-up contribution limits, and helping more small businesses offer these programs. With both Portman and Brady announcing their retirement from Congress at the end of next year, the prospects for consideration and passage seem likely in 2022. More recently, the Retirement Improvement and Savings Enhancement (RISE) Act was introduced by the House Education and Labor Committee’s Chairman Bobby Scott (D-VA) and Ranking Member Virginia Foxx (R-NC), along with Rep. Mark DeSaulnier (D-CA), Chairman of the House Subcommittee on Health, Employment, Labor and Pensions, and Rep. Rick Allen (RGA), that Subcommittee’s ranking Republican. That legislation, which is supported by the American Retirement Association, contains many of the provisions included in the Securing a Strong Retirement Act of 2021, and in fact, will be merged with that bill—next year. Of course, we’re still working on, and advocating for, continued regulatory clarity on legislation regarding retirement income and pooled employer plans, and continue to work with Congress, the Biden administration and regulatory agencies on a host of initiatives to help improve and expand the nation’s retirement system. And if you think we’ve been busy in 2021… just wait ’til next year! NNTM

In the cover story of our Winter issue, nine of NAPA’s Top Women Advisors talk about the evolution they see coming in the retirement industry over the next 10 years. You’ll also find our list of 2021 Top Women Advisors and feature articles on how behavioral finance has changed and ways to meet the challenge of implementing gamification in your clients’ plans. And, of course, industry insight from regular contributors Nevin Adams, Brian Graff, David Levine, Rebecca Hourihan, Steff Chalk, Spencer X Smith and 2021-2022 NAPA President Alex Assaley. 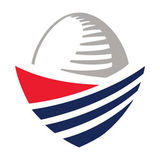