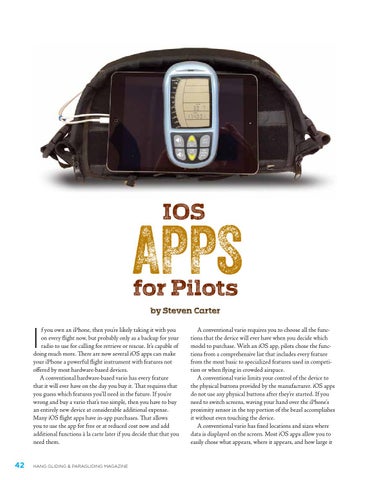 APPS for Pilots by Steven Carter

f you own an iPhone, then you’re likely taking it with you on every flight now, but probably only as a backup for your radio to use for calling for retrieve or rescue. It’s capable of doing much more. There are now several iOS apps can make your iPhone a powerful flight instrument with features not offered by most hardware-based devices. A conventional hardware-based vario has every feature that it will ever have on the day you buy it. That requires that you guess which features you’ll need in the future. If you’re wrong and buy a vario that’s too simple, then you have to buy an entirely new device at considerable additional expense. Many iOS flight apps have in-app purchases. That allows you to use the app for free or at reduced cost now and add additional functions à la carte later if you decide that that you need them.

A conventional vario requires you to choose all the functions that the device will ever have when you decide which model to purchase. With an iOS app, pilots chose the functions from a comprehensive list that includes every feature from the most basic to specialized features used in competition or when flying in crowded airspace. A conventional vario limits your control of the device to the physical buttons provided by the manufacturer. iOS apps do not use any physical buttons after they’re started. If you need to switch screens, waving your hand over the iPhone’s proximity sensor in the top portion of the bezel accomplishes it without even touching the device. A conventional vario has fixed locations and sizes where data is displayed on the screen. Most iOS apps allow you to easily chose what appears, where it appears, and how large it 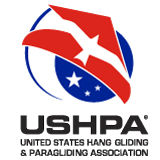