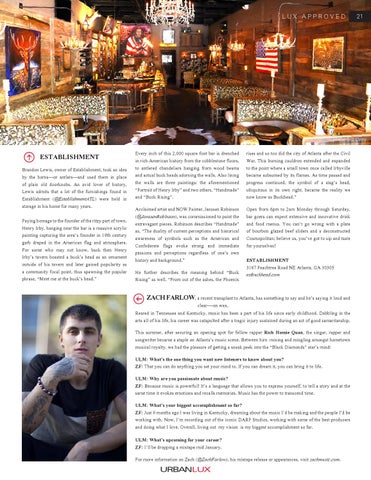 ESTABLISHMENT Brandon Lewis, owner of Establishment, took an idea by the horns—or antlers—and used them in place of plain old doorknobs. An avid lover of history, Lewis admits that a lot of the furnishings found in Establishment (@EstablishmentATL) were held in storage in his home for many years. Paying homage to the founder of the ritzy part of town, Henry Irby, hanging near the bar is a massive acrylic painting capturing the area’s founder in 19th century garb draped in the American flag and atmosphere. For some who may not know, back then Henry Irby’s tavern boasted a buck’s head as an ornament outside of his tavern and later gained popularity as a community focal point, thus spawning the popular phrase, “Meet me at the buck’s head.”

Every inch of this 2,000 square foot bar is drenched in rich American history from the cobblestone floors, to antlered chandeliers hanging from wood beams and actual buck heads adorning the walls. Also lining the walls are three paintings: the aforementioned “Portrait of Henry Irby” and two others, “Handmade” and “Buck Rising”.

rises and so too did the city of Atlanta after the Civil War. This burning cauldron extended and expanded to the point where a small town once called Irbyville became subsumed by its flames. As time passed and progress continued, the symbol of a stag’s head, ubiquitous in its own right, became the reality we now know as Buckhead.”

Acclaimed artist and NOW Painter, Janssen Robinson (@JanssenRobinson), was commissioned to paint the extravagant pieces. Robinson describes “Handmade” as, “The duality of current perceptions and historical awareness of symbols such as the American and Confederate flags evoke strong and immediate passions and perceptions regardless of one’s own history and background.”

Open from 6pm to 2am Monday through Saturday, bar goers can expect extensive and innovative drink and food menus. You can’t go wrong with a plate of bourbon glazed beef sliders and a deconstructed Cosmopolitan; believe us, you’ve got to sip and taste for yourselves!

He further describes the meaning behind “Buck Rising” as well. “From out of the ashes, the Phoenix

ZACH FARLOW, a recent transplant to Atlanta, has something to say and he’s saying it loud and

clear—on wax. Reared in Tennessee and Kentucky, music has been a part of his life since early childhood. Dabbling in the arts all of his life, his career was catapulted after a tragic injury sustained during an act of good samaritanship. This summer, after securing an opening spot for fellow rapper Rich Homie Quan, the singer, rapper and songwriter became a staple on Atlanta’s music scene. Between him mixing and mingling amongst hometown musical royalty, we had the pleasure of getting a sneak peek into the “Black Diamonds” star’s mind: ULM: What’s the one thing you want new listeners to know about you? ZF: That you can do anything you set your mind to. If you can dream it, you can bring it to life. ULM: Why are you passionate about music? ZF: Because music is powerful! It’s a language that allows you to express yourself, to tell a story and at the same time it evokes emotions and recalls memories. Music has the power to transcend time. ULM: What’s your biggest accomplishment so far? ZF: Just 9 months ago I was living in Kentucky, dreaming about the music I’d be making and the people I’d be working with. Now, I’m recording out of the iconic DARP Studios, working with some of the best producers and doing what I love. Overall, living out my vision is my biggest accomplishment so far. ULM: What’s upcoming for your career? ZF: I’ll be dropping a mixtape mid January. For more information on Zach (@ZachFarlow), his mixtape release or appearances, visit zachmusic.com.

In this Issue Urban Lux spent time with several individuals and wrote their stories of reinvention and survival. Conquering homelessness, weight issues, illness and gossip represent just a fraction of their success stories. Their bigger message is that of perseverance. Tory Johnson tells us how she made THE SHIFT and ladies, we kept you in mind when we chose the multi-talented Tank for our cover. He too has a story of reinvention and along with his editorial; you are assured to enjoy every image we captured. Our LUX picks of the season, expert advice, ideas to consider, in addition to our 2014 auto previews from the Miami International Auto Show, are just a few of the dynamic articles we have selected to keep you motivated and intrigued from cover to cover. So sit back, relax, enjoy this issue, celebrate the New Year and the new you! 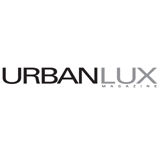