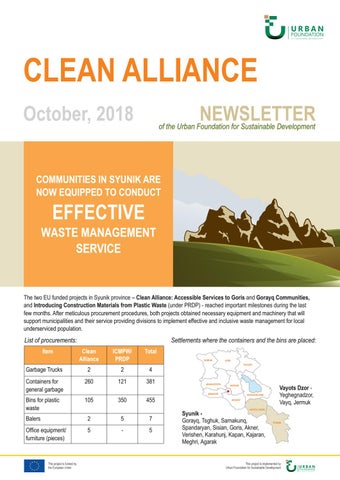 of the Urban Foundation for Sustainable Development

COMMUNITIES IN SYUNIK ARE NOW EQUIPPED TO CONDUCT

Settlements where the containers and the bins are placed: Clean Alliance

One of the new garbage trucks

It should be mentioned that the numbers of the purchased goods vary from what was initially stated in the project documents. This is because in the ďŹ rst stage of the project we helped communities elaborate waste management strategies which include detailed calculations, operational plans and logistics based on data received from ďŹ eldwork.

New bins and containers are placed according to the mapping

Public-Private Partnership in the Framework of the Clean Alliance Project: Contour Global Hydro Cascade CJSC supports Clean Alliance The Clean Alliance project marked its ﬁrst successful cooperation with the Contour Global Hydro Cascade CJSC. This is one of very few examples of partnership between public, private and non-proﬁt entities in Armenia in which mutually beneﬁcial collaboration is as important as the invested resources.As a responsible company, the CGHC covered the costs for purchasing necessary goods and equipment for the clean-up event in the project areas. The Contour Global Hydro Cascade CJSC also reprinted the Urban Foundation's brochure for children about adverse impact of plastic waste,as well as posters with environmental messages. These materials were widely distributed among participants of the clean-up event. The project team hopes that this cooperation will continue in future and encourage creation of other PPPs in public service sector.

Changing Behavior Step by Step Step 1: Environmental education and trainings We believe that the ﬁrst step towards changing people's behavior on treating waste is creating awareness on the issue. The last few months were very intensive in terms of public education and awareness building activities with various audiences. Environmental trainings were conducted with four Civic Action Groups of Goris area and relevant employees of the two municipalities who are responsible for public services and particularly waste management. Special workshops were organized for women on environmentally-friendly household practices. All schools of project area are also engaged but this is an ongoing process.During these trainings, source separation of plastic waste was discussed; beneﬁts of such practice were introduced, adverse impact of plastic waste on nature was shown.

Step 2: Motivation and Facilitation The new bins and containers that appeared in the settlements were met enthusiasm. Residents use them with care and take ownership of the new goods. Now there is not only knowledge but also possibility to separate plastic from general garbage. This project is implemented by Urban Foundation for Sustainable Development

Clean-up Event in Goris Area The clean-up day was a big event in Goris â&#x20AC;&#x201C; a city which is becoming a nicer place to live in from day to day. Encouraged by the new garbage containers and bins for plastic waste, residents decided to contribute to the cleanness of their native place. Groups of people could be seen in different parts of the community cleaning, greening, painting and planting. The soldiers and the ofďŹ cers of Goris military base also took part in the event along with residents by engaging in the difďŹ cult sites. They wished to start separation of plastic waste in their garrison and raise awareness among soldiers about environmental aspects of waste.

Kapan is Getting Ready for Recycling Plastic Waste A major milestone within the Introducing Construction Materials from Plastic Waste (under PRDP) project is procurement of a production line for manufacturing construction materials from plastic waste that is being collected in the bins provided by both projects. The technology is not a complicated one but is innovative in Armenia: it is based on mixing of sand and extruded plastic waste. The line is procured with strict observance of EU rules and requirements. Recently, the project team visited the contracted producer to test the line on the spot and organize shipment. Meantime, the facility in Kapan where the production will be organized, is getting ready to accommodate the line.

Good to Know Piloting Green Talin: The Urban Foundation will help reduce plastic waste in Talin Back in July, the Minister of Nature Protection had announced that Armenia was going to gradually reduce the single usage plastic bags and other items to improve the environmental situation and make waste management effective. The ministry's strategy encompasses promotion of 'green thinking' and behavior change, as well as creation of necessary legal-regulatory and infrastructure conditions for reducing plastic waste. The Ministry has decided to pilot this concept in one community of Armenia –Talin of Aragatsotn province – so that the experience, ﬁndings and lessons learned there can be then analyzed and measured, recommendations for its scaling up are drawn.

The Talin pilot was launched by the First Deputy Minister Irina Ghaplanyan and Mayor of Talin Sargis Aramyan The Urban Foundation supports the Green Talin pilot by sharing experience in the ﬁeld of waste management and dealing with plastic waste, as well as in conceptualizing and implementing a tailored awareness and social marketing campaign.

The ﬁrst open lesson at school #2 in Talin on environmental aspects of waste held by the Urban Foundation representative.

The celebration took place in Vedi, Ararat province on September 18. It was logical continuation of practical trainings and ﬁeld measurements organized for young active citizens, teachers, and water users of Ararat and Armavir provinces who learned practical skill and carried out monitoring of water quality with the equipment provided by the project. Two groups of young activists and educators presented the results they had recorded with the testing equipment provided by USAID in ﬁsheries of Apaga and Hovtashat communities. The aim of the event was to highlight the importance of community residents taking action to monitor and protect their local water resources. During the event, the results of the monitoring were uploaded to the World Monitoring Day Portal (http://www.worldwatermonitoringday.org) to link the ﬁeld monitoring exercise to the fact of realizing the global need for careful approach to water resources.

The European Union is made up of 28 Member States who have decided to gradually link together their know-how, resources and destinies. Together, during a period of enlargement of 50 years, they have built a zone of stability, democracy and sustainable development whilst maintaining cultural diversity, tolerance and individual freedoms. The European Union is committed to sharing its achievements and its values with countries and people beyond its borders. This publication has been produced with the assistance of the European Union. The contents of this publication are the sole responsibility of Urban Foundation and can in no way be taken to reflect the views of the European Union. 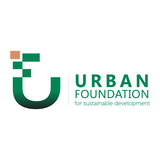