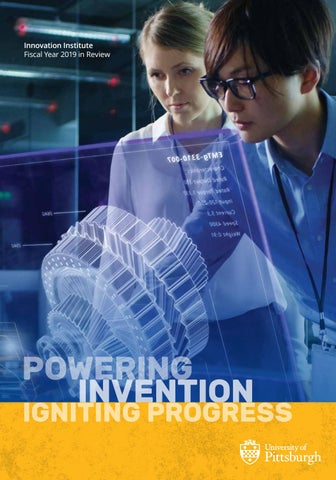 STUDENT ENTREPRENEURSHIP 2019 Randall Family Big Idea Competition Student innovation and entrepreneurship at Pitt enjoyed another strong year of growth. The Innovation Institute’s Big Idea Center reached 1,975 students through its programs and events, compared to 1,566 in fiscal year 2018 and nearly double the 898 students reached in fiscal year 2017. The annual Randall Family Big Idea Competition saw more than 300 students comprising 103 innovation teams compete for $100,000 in prizes, including a $25,000 top prize. From those teams, 10 were selected to participate in the Blast Furnace student idea accelerator with the goal of forming a startup company. A total of 13 teams led by students formed startups in fiscal year 2019. Some of these teams have been invited to enter the Forge, the Big Idea Center’s new incubator program established with the support of the University’s Pitt Seed grant program. Here, the teams will continue to receive education and mentoring from entrepreneurs in residence, and other support as they launch their new ventures.

Fiscal year 2019 represented another banner year of innovation and entrepreneurship on campus and in the region. University of Pittsburgh faculty, staff, and students once again set or matched records for invention disclosures and transactions, including spinning out 17 companies based on Pitt-developed technologies. Pitt innovators want to see their discoveries make a difference in people’s lives and reinvent the world we share. The momentum that has been established over the past five years is undeniable. And there are no signs of stopping. The number of people who are engaging with the Innovation Institute for education, services, networking, and funding continues to grow. We were delighted to receive a $750,000 federal grant for LifeX, the life sciences accelerator created by the University in 2017. This grant will be used to expand programs and services so that more life science startups emerging from Pitt and from the region have a place to supercharge their growth. Student innovation also received a boost when the Innovation Institute’s Big Idea Center was selected for a Pitt Seed grant through a program established by the chancellor to stimulate new transformative projects across campus. The Big Idea Center will launch a new incubator, the Forge, where student startups can receive the support they need as they seek to launch their initial products and obtain their first customers. Finally, the Institute for Entrepreneurial Excellence (IEE) is driving economic development and increasing the diversity of Western Pennsylvania’s small business community with targeted, high-impact consulting services that are growing jobs and investment. Last September, after a multiyear engagement with the IEE’s Small Business Development Center, Sugar &amp; Smoke Southern Kitchen and Bar opened in Pittsburgh’s Bloomfield neighborhood, just one of the 52 businesses started with IEE’s assistance last year. Bring on 2020!

UNIVERSITY OF PITTSBURGH INNOVATORS Here are just a few examples of Pitt innovators who strived to improve their lives and the lives of others while creating economic opportunity in fiscal year 2019.

Bruce Freeman Bruce Freeman has built his lab in Pitt’s Department of Pharmacology and Chemical Biology into a global authority on the study of countering the oxidative stress of free radicals by decoding the cellular signal controlling properties of nitro fatty acids. As his academic career is winding down, his impact is ramping up with the company that has licensed a significant portion of the lab’s intellectual property portfolio. Complexa Inc. is now in Phase II trials of treatments for pulmonary artery hypertension and focal segmental glomerulosclerosis, an inflammatory kidney disease that frequently results in renal failure. At this stage of my career, I want to ensure that our research team continues to thrive and see the discoveries we pioneered have a substantive impact. We intend to increase the life span of people with diseases that lack effective drug therapies. Very few basic scientists are positioned to do that. —Bruce Freeman

Emily Siegel, Trek Trek was the winner of the 2019 Randall Family Big Idea Competition top prize of $25,000. The team, led by engineering students Emily Siegel and Samantha Bunke, is developing a chewing gum that removes plaque both mechanically and chemically and is made from biodegradable materials targeted to the millennial generation. Trek was selected to participate in the Blast Furnace student accelerator and is now poised to enter the Forge startup incubator. I never thought I could actually pursue my interest in entrepreneurship, but when my idea got traction with peers and judges, I realized it was completely possible. The Big Idea Center has encouraged and supported me along this journey, and I can’t recommend their incredible programs highly enough to other students. Students should definitely take advantage of this resource while they can! —Emily Siegel

Over the past 20 years, Maria Escolar has become the world’s foremost expert on Krabbe disease, a genetic neurodegenerative disease that is fatal if not diagnosed in the first few weeks of life. Now Escolar, director of the Program for the Study of Neurodevelopment in Rare Disorders, in collaboration with her husband, Paul Szabolcs, chief of the Division of Blood and Marrow Transplantation and Cellular Therapies at UPMC Children’s Hospital of Pittsburgh, is developing a gene therapy combined with a cord blood transplant that may stop the disease’s progression. She is collaborating with the Innovation Institute to license that technology to an existing company or potentially form a startup. If our trials can show that Krabbe’s progression can be halted, it would be a major breakthrough for these families. —Maria Escolar

Diamond Kinetics Pitt spinouts often keep in close contact with the University. That’s definitely the case with Diamond Kinetics, a Pittsburgh company that has commercialized technology developed by Swanson School of Engineering Professor William “Buddy” Clark. The company’s baseball/ softball swing and throw tracking devices are used by about half the teams in Major League Baseball and many college and developmental programs across the country. Now the company is providing its products to the Pitt baseball and softball teams so that Clark and School of Computing and Information Associate Professor Konstantinos Pelechrinis can study how using the products translates to on-field performance.

We’re excited to work with Diamond Kinetics and are lucky to have them in our backyard. —Jodi Hermanek, head coach, Pitt Softball

Brandon Daveler When a Texas theme park designed to be accessible to children with physical challenges approached Pitt’s Human Engineering Research Laboratories (HERL) about developing a wheelchair that kids could use in the water park area without worrying about damaging the electronics of an electric wheelchair, its innovators answered the challenge by creating an air-powered chair. Brandon Daveler, a PhD student at HERL, immediately saw the potential for the chair beyond water parks and formed a startup company, Atimize, that has licensed the technology from the University. Other applications Daveler is pursuing include replacing electric wheelchair and scooter fleets at big box retail stores with air-powered chairs that are easier to recharge and less expensive to maintain. As a power wheelchair user, I live the problems that I am trying to solve. Before my injury, I was an outdoors enthusiast, so I was happy to be working on a project that could help people like me be more independent when outdoors. —Brandon Daveler

The University of Pittsburgh is an affirmative action, equal opportunity institution. Published in cooperation with the Office of University Communications. 112019-0919 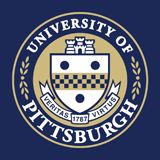