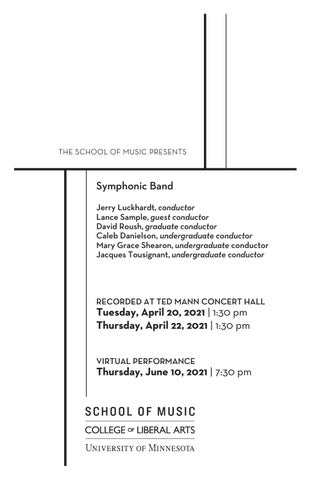 Before we begin, we first want to acknowledge that the University of Minnesota Twin Cities is built within the traditional homelands of the Dakota people. It is important to acknowledge the peoples on whose land we live, learn, and work as we seek to improve and strengthen our relations with our tribal nations. We also acknowledge that words are not enough. We must ensure that our institution provides support, resources, and programs that increase access to all aspects of higher education for our American Indian students, staff, faculty, and community members.

Jerry Luckhardt is associate director of bands at the University of Minnesota School of Music, where he conducts the Symphonic Band and teaches undergraduate conducting. Luckhardt has appeared as a guest conductor and clinician with ensembles throughout North America, Europe, and Asia. He has earned acclaim from composers such as Michael Colgrass, Shelley Hanson, Libby Larsen, Alex Shapiro and Frank Ticheli for performances of their works. Luckhardt is also a strong advocate for music education, with memberships in groups such as the College Band Directors National Association, Minnesota Music Educators Association, National Association for Music Education, and Minnesota Band Directors Association. Lance Sample serves as assistant director of athletic bands at the University of Minnesota, where he assists the Marching Band, directs the Minnesota Athletic Pep Bands, and teaches conducting. Sample earned degrees from West Virginia University, Florida State University, and The University of Texas at Austin. David Roush is a second-year wind conducting master’s student at the University of Minnesota. Prior to his studies at Minnesota, he received a bachelor of music education degree at the University of Illinois, Urbana-Champaign. His career began as a band director for grades 5-12 in Neoga, IL. where he taught for 5 years. He currently lives in Minneapolis.

Thank you to John Marks and Sari Baker for their technical assistance to make this online performance possible.

Don’t miss a beat! Visit music.umn.edu to sign up for the weekly School of Music e-newsletter of performances and events.

The School of Music, a unit of the College of Liberal Arts, is a leading institution for the education of successful performers, composers, teachers, administrators, and scholars. The School interacts with the larger university and Twin Cities communities through classes, participatory performing opportunities, community engagement activities, and more than 400 public performances each year. The students and faculty of the School are grateful for the continuing interest and support of parents and friends.

The University of Minnesota is an equal opportunity educator and employer. This publication/material is available in alternative formats upon request. Direct questions to Jennifer Scholte, School of Music, 612-626-1094.

For further information or to apply to the School of Music, visit music.umn.edu, call 612-624-5740, or email mnmusic@umn.edu. A complete calendar of events is available at music.umn.edu.

© 2021 Regents of the University of Minnesota. All rights reserved. 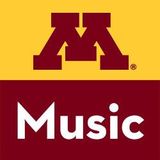 University of Minnesota School of Music