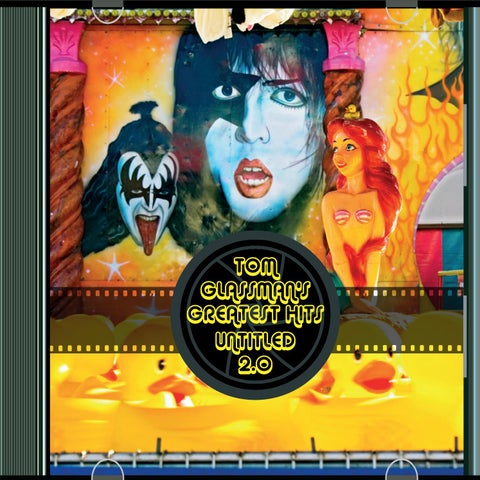 Tom Glassman has been shooting a camera for hundreds of years...

Apertures & Anecdotes: Tom Glassman’s Greatst Hits Copyright © 2018 Untitled 2.0 All rights reserved. No portion of this work may be reproduced in any form or by any means without permission of Untitled 2.0 All works completed between 1978 - 2018 Photographs & accompanying text by Tom Glassman. Apertures & Anecdotes {Untitled 2.0, May 18, 2018 – June 30, 2018} Design by Duane Megyesi Untitled 2.0 A Gallery on the Corner of 6th & G Street 119 SE 6th Street, Grants Pass, OR 97526 DeWayne Thomas Lumpkin untitled2gallery.com

All images are unaltered by photoshop or other photo-editing software.

Taken mid-summer, on the midway at a fair in Oregon about 8 p.m. with the setting sun coming in from the right illuminating The Little Mermaid. I asked the carnival barker to hold people back for a minute while I crouched down and lined up this improbable layering of unlikely elements.

Digital Negative Florida Roadside, 2014 Seen from the interstate highway in Tampa, Florida â&#x20AC;&#x201C; I immediately took the next exit and went in search of how I could get an unobstructed view of this cosmic tableau. Eventually I was able to locate the property and get permission to venture out into the pasture (braving the snakes and the cardboard cow) to come away with this image.

Digital Negative Oregon Horse Set, 2014 Taken at a horse event in Oregon. I was actually composing a picture of a group of young teenage riders â&#x20AC;&#x201C; all talking on their cellphones â&#x20AC;&#x201C; when I noticed this striking black and white contrast in front of me. I asked permission to take her photograph, she agreed, sat up straight, smiled, and never knew what I was really interested in.

I stumbled across this unlikely juxtaposition in a flea market. I asked the owner if I could take a photo, and he said yes, but couldnâ&#x20AC;&#x2122;t figure out what I found so interesting. I moved slightly to my left so the clay sculpture in front didnâ&#x20AC;&#x2122;t obscure the writing on the record album. And, voila my Christmas gift to me.

Slide Film Positive Santa Fe, New Mexico, 1992 I had been photographing for about a week at Bryce and Zion Canyons and had stopped in Santa Fe on my way to Albuquerque to fly back home to Boston. Immediately after entering Santa Fe, I saw this and had to photograph it as the colors of the car so perfectly mirrored the palette of the mural in the background.

Snowdrift with Footprints Digital Negative Tibetan Monastery, Oregon, 2012 One of the advantages of a 4-wheel- drive Jeep is that you can go off road in snowy weather and be given an image like this one. This is a shot of a Tibetan Monastery in Oregon (near Mt. Ashland) with snow on the roof and a snowdrift in the foreground with footprints in the snowdrift.

Missing Mid-Tones: An image taken with my very first camera (Canon FTB) with a red filter, on a gray day, of 4 gray oil storage tanks; slightly underexposed; slightly under-developed; printed on high contrast paper, with a wide open aperture, for a short amount of time; underdeveloped and then quickly put in stop bath and fixer.

Digital Negative Palouse, Eastern Washington, 2007 Taken in mid-March in the Palouse in Eastern Washington. This image took almost an hour to compose by slowly driving in my car and checking out both sides of the road until the right confluence of lines and colors came together. Sadly there was no shoulder on the road. Luckily there was practically no traffic.

Slide Film Positive Harbor Stairs with Ocean in the Background, 1993 While touring a historic fort in one of Bermudaâ&#x20AC;&#x2122;s harbors, I saw this set of stairs in the process of being painted. Luckily all the tourists were photographing historic, picturesque subject matter that the local chamber of commerce would approve of..â&#x20AC;Śgiving me an opportunity to indulge my passion for abstract lines and colors.

Digital Negative Florida Strip Shopping Mall, 2014 Seduced by the onslaught of intense colors at an outside Florida shopping mall, I kept moving around and looking up until a series of geometric shapes seemed to come together to create an interesting image. This is one of about 6 or 7 similar compositions I was able to realize while at this colorful, mesmerizing mercantile Mecca.

Digital Negative Oregon Flea Market Shelf, 2011 Who needs a photo stylist? An almost perfectly arranged composition on a shelf in a flea market – with the paint on the back wall almost perfectly mimicking a blue sky. The romance-novel Native American “Hunk,” the price tags, the cellophane tape on the steer, and the Cowgirls Pin-Ups title all add sublimely to this cosmically improbable composition.

Tri-X Film Negative Diner, Boston, Massachusetts, 1991 When I worked in Boston, I always took my camera with me (even during my lunch hour walks). I snapped this at a lunch counter in the financial district. I was drawn to the classic tile pattern of the diner floor and the guy aggressively hitting on the woman next to him while she flirted back and dangled her shoe.

13 Race Cancelled Due to Fog

Film Negative Newport, Rhode Island, 1985 I used to live on Goat Island in the middle of the harbor in Newport, Rhode Island. This particular image was a rarity as the fog was nice enough to reveal the racing dinghies while obscuring all the busy distracting clutter one typically finds in a busy resort harbor.

Digital Negative Medford, Oregon 2013 Inspired by a photographer friendâ&#x20AC;&#x2122;s image of a moving truck: I had to stop for a train at an underpass, so I got out of my car, set up the tripod, stopped the lens down to get a slow shutter speed, and took about a dozen shots of the passing train. This was the most colorful of the set. The underpass also helped to frame the shot in a unique manner.

Slide Film Positive Marshfield, Massachusetts, 1986 This is the mural on the side of the Italian sausage cart at the Marshfield State Fair with the umbrella from their al fresco dining area in the foreground. The dark triangular shadow is from a tent on the midway. The rivets in the trailer lend a surreal touch of faux authenticity to the patently poor painting by being almost exactly where any painted rivets should be.

16 This Holiday is Toast

Digital Negative Oregon Coffee Shop, 2006 Iâ&#x20AC;&#x2122;m a huge fan of irony..â&#x20AC;Śand what could better illustrate the unbounded, ubiquitous, pervasive joy of the holidays than tiny, lonesome little Christmas trees and the isolated private moments of individuals in a crowded coffee shop during the busy, festive holiday season; a classic example of a major holiday failing to live up to its full 24/7 rapturous potential.

Film Negative Flooded Playground, Seattle, Washington, 2003 This image was taken at a flooded playground in the Seattle area. I especially like the fact that the sky reflected in the foreground standing water actually has more detail than the real sky. I am also grateful that the photo gods decided to grant me a calm day with no wind, which would cause ripples and mar the entire effect.

Film Negative Fallon, Nevada, 2007 This is one big sand dune. I have other shots of it with tiny black specks, which are really 4-wheel drive vehicles carousing about all over it. It is in Fallon, Nevada, at about 4,000-foot elevation, so the sky really is that deep blue.

Digital Negative Knothole in White Picket Fence with Snow in Background Between Pickets, Southern, Oregon, 2007 A color image of a knothole in a white picket fence, with snow in the background between the pickets: This image would not have worked with green grass behind the fence; but a thin covering of snow helped to create the potential for a strong, monochromatic, minimalist graphic photograph. This image has since become my all-time favorite.

Another image from my litany of failed celebrations among the huge pantheon of holiday under-achievers: In this case, an image that took me 2 days to create. The night I saw it, I didnâ&#x20AC;&#x2122;t have enough of the right light: flash would create hot spots and my car headlights werenâ&#x20AC;&#x2122;t right. So I came back the next night with a powerful flashlight and painted in the fill light.

First of all, I take photos because it’s fun and because I enjoy it. And even if I weren’t showing my work in galleries, I would still keep taking photographs. Whenever possible, my primary goal is take a photograph that doesn’t look like a photograph. This might entail anything from recording reflections or abstract lines and patterns to juxtaposing unusual colors or shapes to creating compositions with extreme negative space. My photography exploits the camera’s point of view to isolate a familiar object and force the viewer to see it with fresh eyes. When people look at my work, I want them to see my images as I envision them. I create fun, unexpected photos by positioning the camera to capture found objects or distinct background/foreground layers in close proximity that aren’t typically seen together. I am a technical photographer. My photos are carefully composed and cropped (corner to corner) in the viewfinder before I snap the picture. Everything about my results is deliberate and time-consuming. I use a tripod, bubble level, filters, mirrorlockup, cable release, self-timer, the appropriate f-stop and precise exposures to manifest with the camera what I already see in my mind. Consequently, what you are looking at are images that have been calibrated for printing but are otherwise unaltered in any way by image editing software. And while many photographers enjoy all the new tools that today’s digital darkroom offers, my real passion is spending time out in the field with the camera figuring out how to see something familiar in a wholly new way.

The Day the President Met the King... and Elvis

In addition to being the best-selling photographer ever â&#x20AC;&#x201C; with the best images and the best pixels â&#x20AC;&#x201C; Tom Glassman is also a best-selling novelist, screenwriter, a worldrenowned neurosurgeon and cardiologist, as well as an astrophysicist, astronaut, world-class concert pianist, and a recent online graduate of Trump University School of Self Promotion.

"Race Cancelled Due to Fog"

"This Holiday is Toast" 2006 Digital Negative