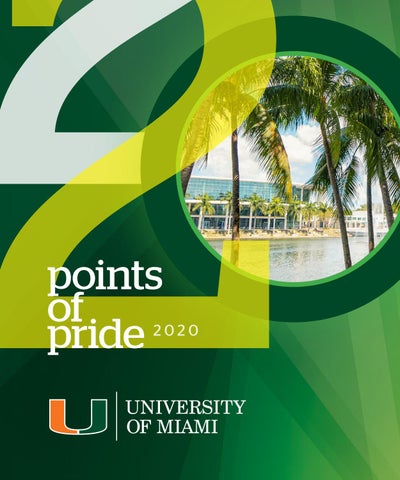 20 Looking back at 2020, we reflect on our distinct capacity as Hurricanes to triumph, even in the face of adversity.

The University of Miami is listed among the top tier of U.S. institutions.

• The Miller School of Medicine ranked No. 1 in Florida and No. 39 nationally for National Institutes of Health research funding in FY19. Two Miller School departments ranked among the nation’s top 10 for funding, human genetics (No. 4) and neurological surgery (No. 10). • U.S. News &amp; World Report ranked several University programs in the top tier of its “Grad Schools” list, including clinical psychology (No. 18), physical therapy (No. 20), health care management (No. 20), Master of Science in Nursing (No. 27), and Doctor of Nursing Practice (No. 31). The list also ranked three School of Law programs among the nation’s best—tax law (No. 26), clinical training (No. 32), and international law (No. 36)—and ranked the Miller School of Medicine among the best medical schools for research (No. 50).

• The University of Miami jumped eight spots to No. 49 in U.S. News &amp; World Report’s 2021 “Best Colleges” issue, listed once again among the 50 top-tier colleges and universities. U.S. News also ranked the University No. 25 on its “Best Colleges for Veterans” list. • U.S. News &amp; World Report named the University’s Bascom Palmer Eye Institute the top ophthalmology hospital in the nation for the 19th time and the Miller School of Medicine’s Department of Otolaryngology No. 28 in the nation.

Sensational Students • Distraction Magazine was named the Four-Year Feature Magazine of the Year by the College Media Association for 2019-20. Distraction Magazine and Ibis Yearbook both received several Associated Collegiate Press Pacemaker awards, considered the Pulitzer Prize of collegiate journalism. • School of Communication student Kayla Abramowitz was one of 10 winners of the 2020 .ORG Impact Award for Outstanding Volunteer by Public Interest Registry for her nonprofit organization, Kayla Cares 4 Kids, which donates books, DVDs, and games to hospitalized children.

• Quinton Lawton and Jimmy Yun Ge, doctoral students at the Rosenstiel School of Marine and Atmospheric Science who research hurricane formation, each received one of only four National Science Foundation Graduate Research Fellowships awarded nationally in the Physical and Dynamic Meteorology category. • Julia Lynch, a finance and legal studies major and member of the University’s Debate Team, received the prestigious Julia Burke Award for Character and Excellence from the American Debate Association.

Emrah Celik, assistant professor in the College of Engineering

• In a first-of-its-kind study, Department of Psychology researchers found an early behavior marker for autism by studying how 15-month-old babies react when briefly separated from a parent. • Stephanie Musgrave, assistant professor in the Department of Anthropology, coauthored a study in the American Journal of Physical Anthropology exploring how chimpanzees in Central Africa’s Congo Basin use specialized tool sets to harvest termites, ants, and honey. The research may offer insight about how technology came to be a defining aspect of human evolution. • Zheng Wang, assistant professor of computer science, received a $1.8 million NIH Maximizing Investigators’ Research Award to reconstruct and analyze a super-resolution 3D structure of the genome.

• Using computational chemistry, Rajeev Prabhakar, professor of chemistry, and graduate student Vindi M. Jayasinghe-Arachchige designed a new molecule that could significantly advance the study and uses of enzymes. • Emrah Celik, assistant professor in the College of Engineering, created a new material for aviation that is 80 percent lighter than steel and 50 percent lighter than aluminum. • The National Oceanic and Atmospheric Administration selected the Rosenstiel School of Marine and Atmospheric Science to host the Cooperative Institute for Marine and Atmospheric Studies, which includes a renewable award of up to $310 million over five years to advance research in weather and climate observations, ecosystem science, and the restoration of marine resources.

The Miller School of Medicine launched the NextGenMD Curriculum, which focuses on health system science and greater emphasis on mentorships.

• The University appointed 11 new endowed faculty chairs in 2020, reaching a total of 57 toward the goal of 100 by 2025. • Judy Schaechter, a professor in the Miller School of Medicine Department of Pediatrics, was named a 2020-21 Health Policy Fellow by the Robert Wood Johnson Foundation and the National Academy of Medicine. • Felicia Marie Knaul, an international health economist who is director of the University of Miami Institute for Advanced Study of the Americas and professor in the Department of Public Health Sciences at the Miller School of Medicine, was elected into the Canadian Academy of Health Sciences. • Carlos Rafael Rivera, assistant professor and director of the Media Writing and Production program in the Frost School of Music, scored the Netflix hit series “The Queen’s Gambit.”

For the sixth year in a row, the University raised more than $200 million.

• Sylvester Comprehensive Cancer Center, part of the University of Miami Health System and the Miller School of Medicine, announced an anonymous $126 million gift, the largest in University history, to advance cancer research and treatment innovations. The gift was made in honor of Dr. Stephen Nimer, director of Sylvester and the Oscar de la Renta Endowed Chair in Cancer Research. • In response to COVID-19, the University received more than $8 million in financial and in-kind gifts to accelerate research, enhance patient care, and provide medical supplies to front-line workers. • Miami baseball alumnus Tommy Adams donated $1 million toward the University of Miami’s Baseball Facility Enhancement Campaign, the largest gift from a former University baseball student-athlete.

• The Miami Dolphins Foundation announced a $75 million commitment to the Sylvester Comprehensive Cancer Center. Over the past 10 years, the Miami Dolphins have partnered with the University to raise more than $32.5 million for Sylvester through the annual Dolphins Challenge Cancer event. • The University received more than 304 new planned gifts in support of essential student scholarships, cutting-edge medical and other research, and innovative academic programs. • In memory of Patti Herbert, the University of Miami Patti and Allan Herbert Business School launched a challenge that netted $100,000 in matching funds. • Innovative digital campaigns, including a University-wide Giving Day, engaged more than 4,000 alumni and friends of the U as first-time donors.

• The University launched The Flagship Initiative for Women and Gender Equity to better support female students, faculty, staff, and other members of the University and broader community in achieving gender parity in leadership. • Amid ongoing nationwide protests against police brutality, President Julio Frenk shared a 15-point plan the University will implement to support racial equality, inclusion, and justice. Initiatives of the plan include creating an Office for Faculty Inclusion and Diversity, appointing a special advisor to the president on racial justice, and establishing the University of Miami Center for Global Black Studies.

Grand Openings • Lakeside Village, a 12-acre student housing complex that opened on the Coral Gables Campus, features modern apartments and suites, as well as indoor and outdoor spaces and amenities that are transforming the on-campus living experience. • A new greenhouse that opened at the University’s John C. Gifford Arboretum expands opportunities for research on plants, including endangered subtropical species.

• The Student Services Building on the Coral Gables Campus is now home to the Camner Center for Academic Resources, the Counseling Center, and ’Canes Central—a new student centered, service-oriented department for matters related to registration and records, billing and payment, financial aid, and ’Cane Cards.

• Nine University of Miami athletic programs earned perfect single year scores of 1,000 in the 2018-19 Academic Progress Report. • The athletics department launched its official podcast, “Behind the U,” featuring engaging interviews with Hurricanes past and present. • Redshirt senior David Dinsmore won his fourth gold medal in the men’s platform, capturing top honors at the 2020 ACC Swimming and Diving Championships.

• Senior Debbie Ajagbe was named the 2020 ACC Indoor Track Scholar Athlete of the Year, ACC Women’s Field Performer of the Year, and ACC Championship Field MVP. • On the heels of an 8-2 regular season, the Hurricanes football program signed one of the nation’s top 2021 recruiting classes, landing a top-five quarterback prospect, a trio of four-star wide receivers, and the nation’s top defensive tackle among 21 new players.

The University became one of only six locations in Florida and 89 locations nationally to enroll volunteers for the first Phase 3 clinical trial of a COVID-19 vaccine developed by scientists at the NIH’s National Institute of Allergy and Infectious Diseases with collaborators at Moderna, Inc.

• Dr. Tanira B.D. Ferreira, chief medical officer at the University of Miami Hospital and Clinics, was one of three authors featured in the New England Journal of Medicine for expertise in managing elective surgeries during COVID-19 surges. • University of Miami Libraries created “Documenting COVID-19: South Florida’s Pandemic Experience” to capture community-generated content about the pandemic.

• The University’s Office of the Vice Provost for Research and Scholarship awarded 24 research teams rapid response grants ranging from $5,000 to $40,000 for innovative projects that will provide critical information about the novel coronavirus. • The University of Miami Health System established the COVID-19 Heart Program to identify serious conditions related to COVID-19 and protect the heart from serious damage.

• In fall 2020, the University hired 75 students to be public health ambassadors to support health and safety guidelines on campus, such as wearing facial coverings, physical distancing, and hand washing.

Looking back at 2020, we reflect on our distinct capacity as Hurricanes to triumph, even in the face of adversity. 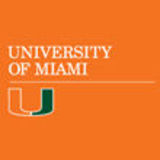 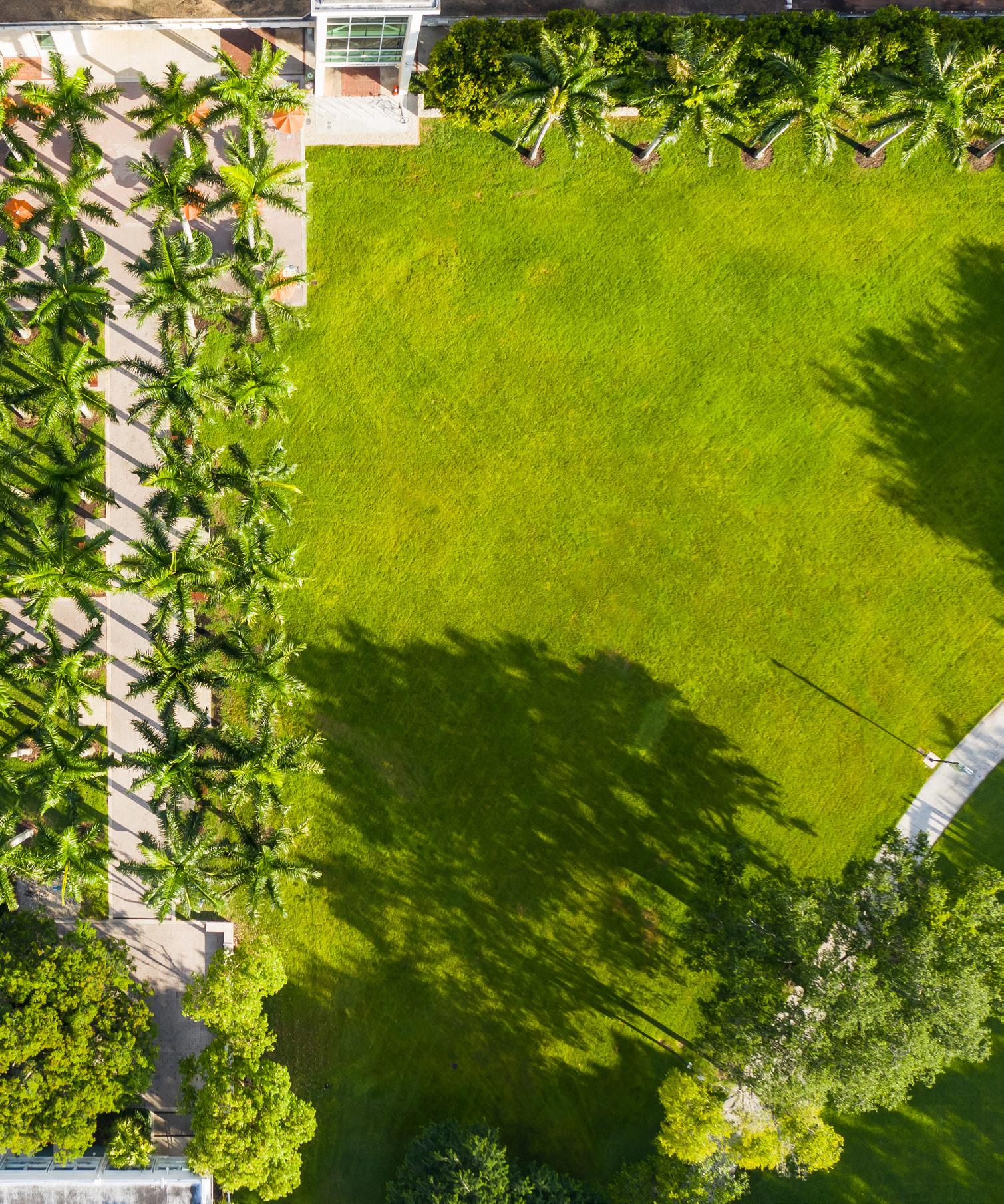 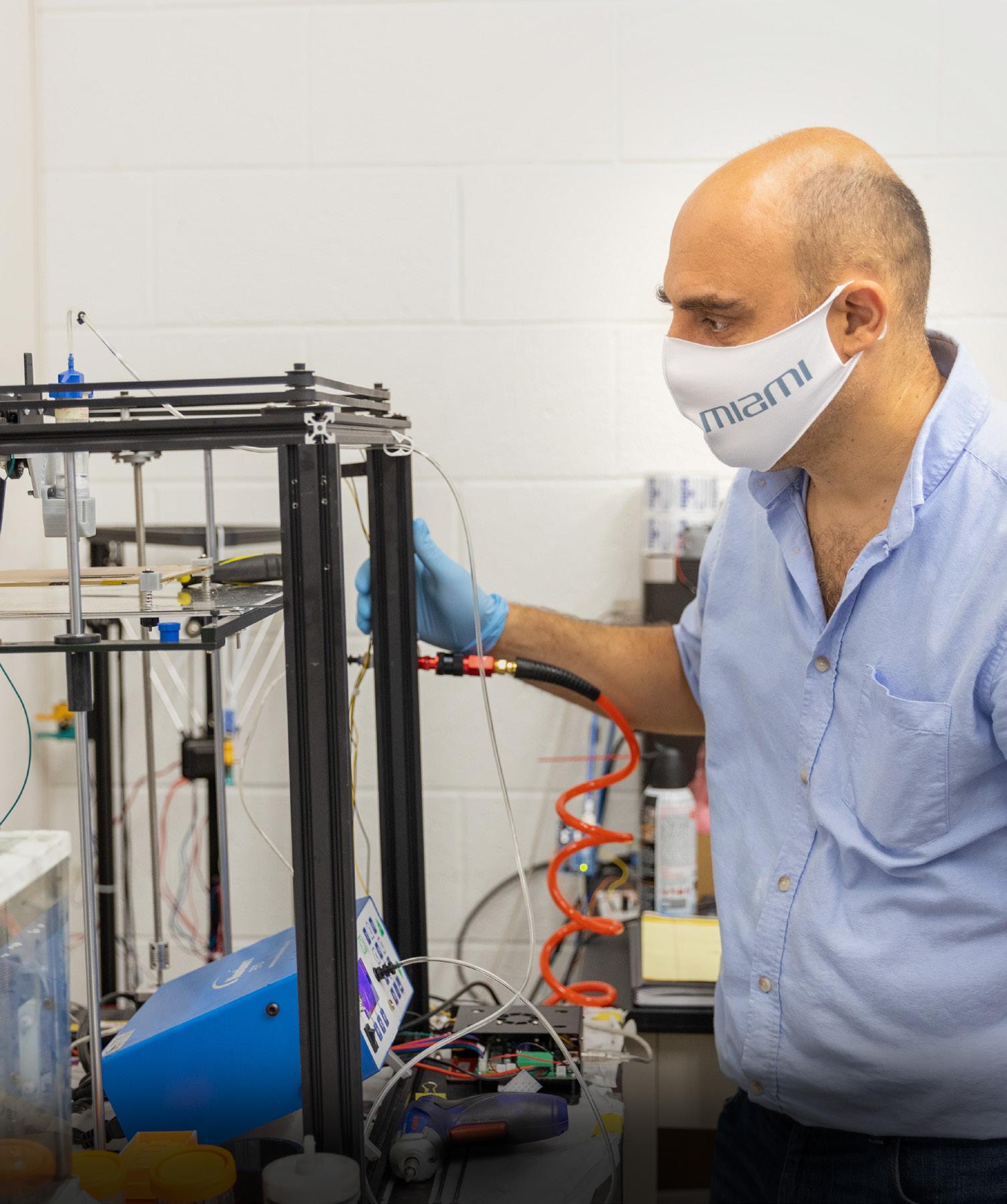 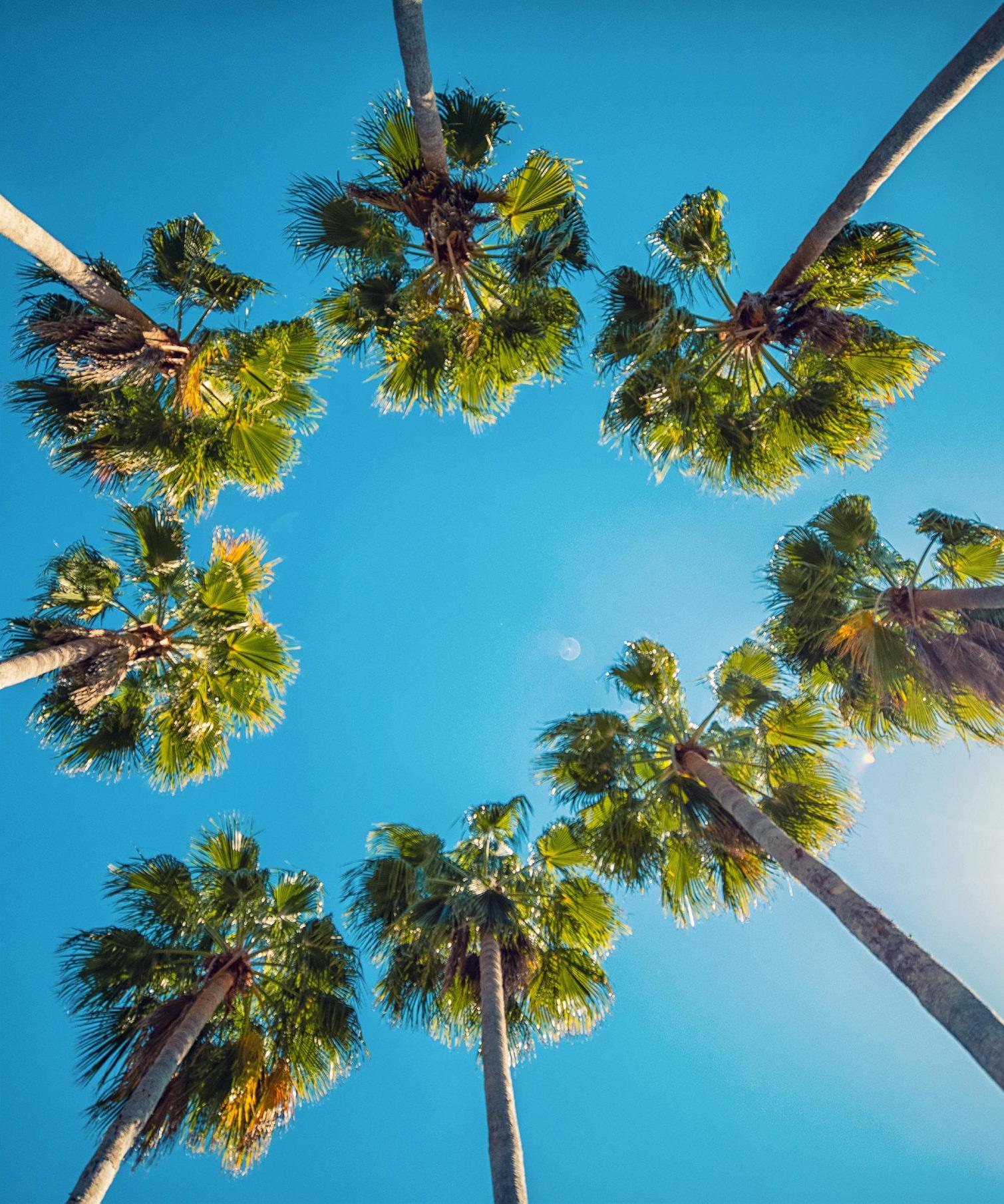 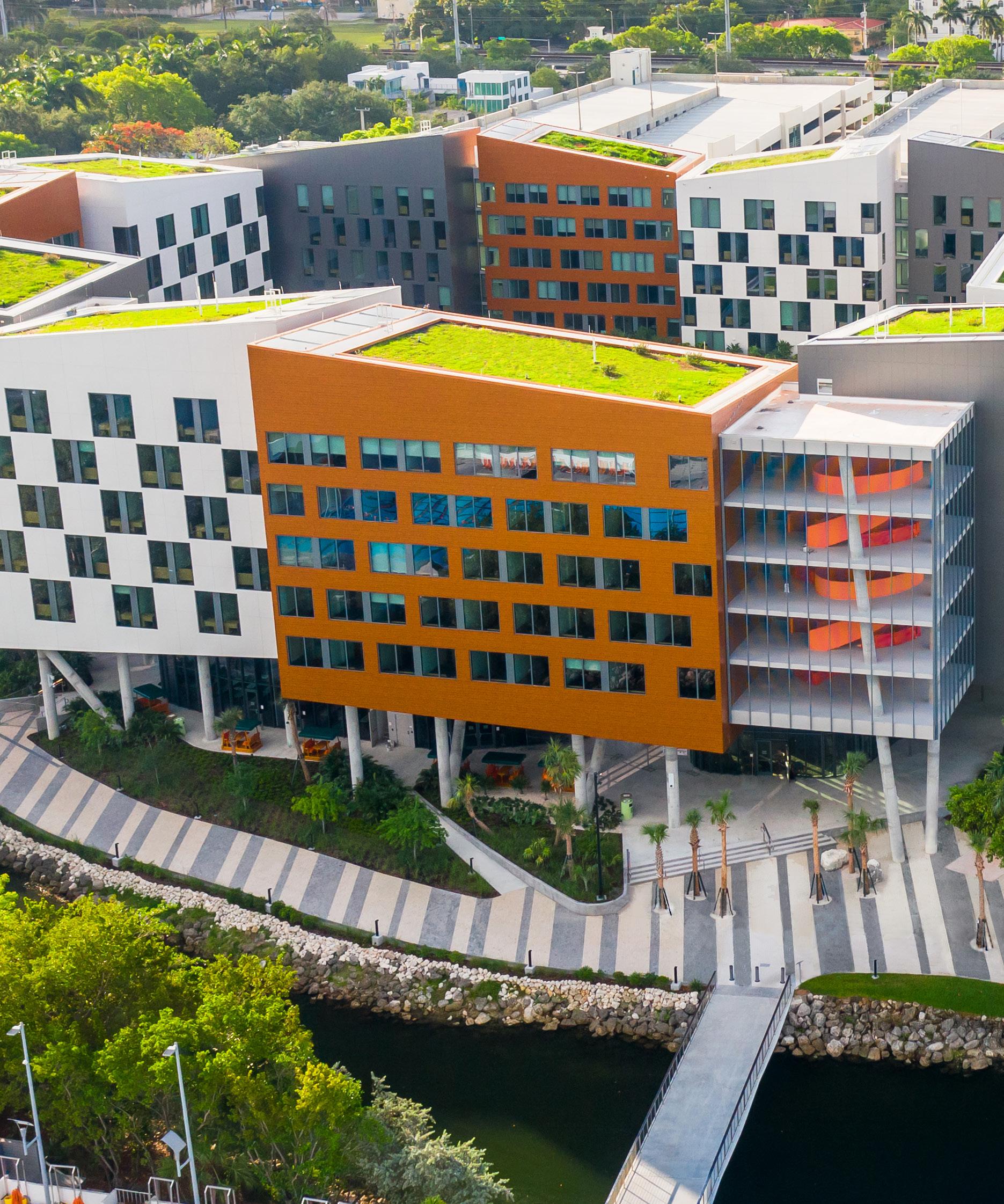 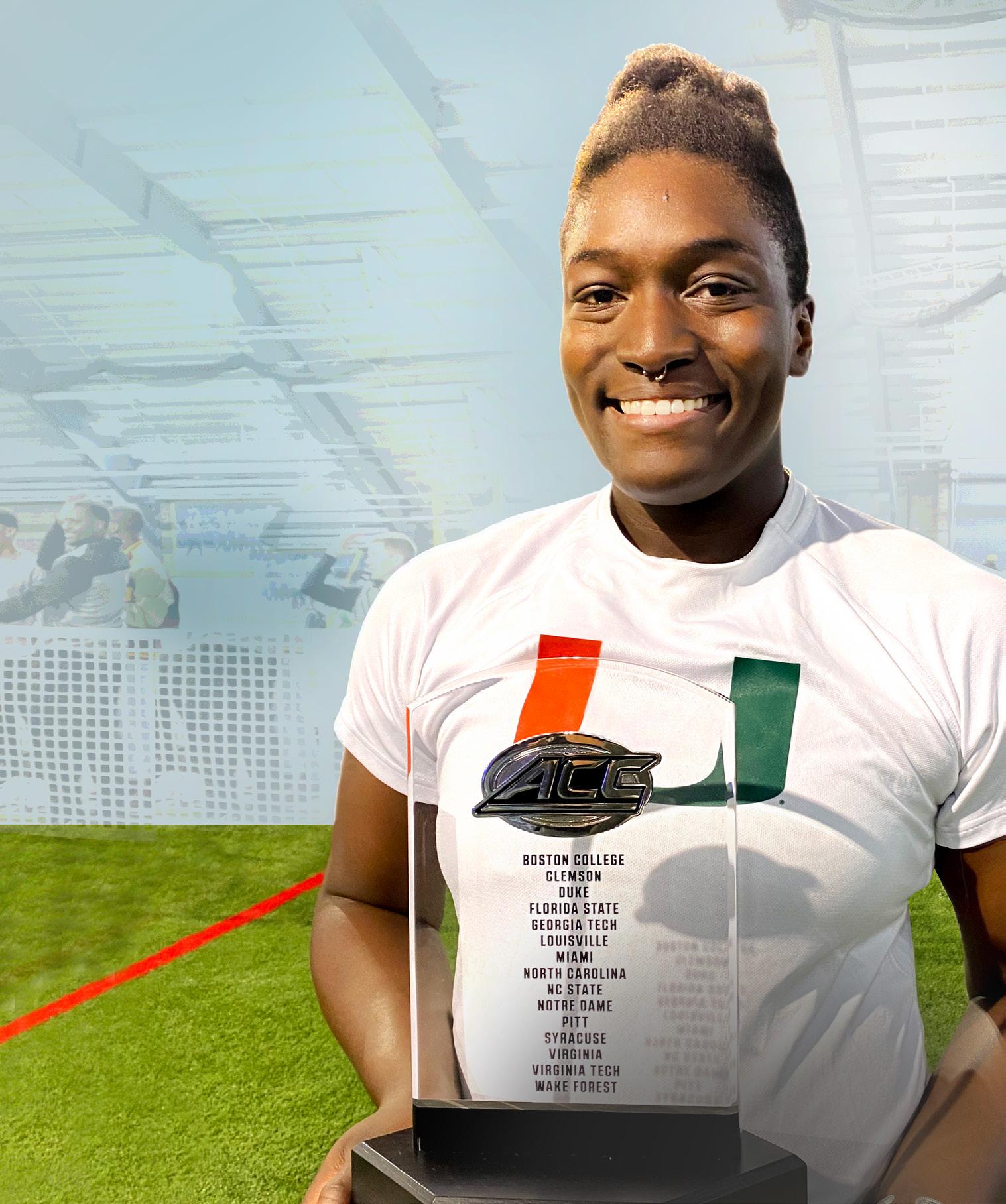