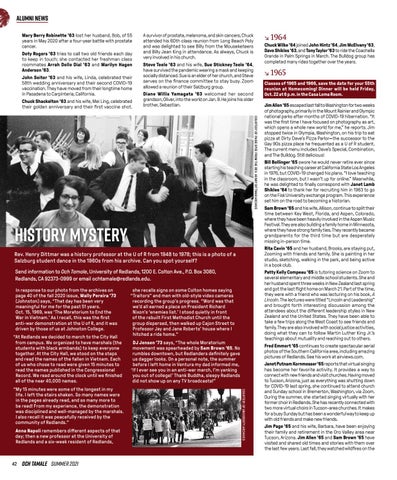 ALUMNI NEWS Mary Berry Robinette ’63 lost her husband, Bob, of 55 years in May 2020 after a four-year battle with prostate cancer. Doty Rogers ’63 tries to call two old friends each day to keep in touch; she contacted her freshman class roommates Arrah Dolle Dial ’63 and Marilyn Hagen Anderson ’63. John Seiter ’63 and his wife, Linda, celebrated their 58th wedding anniversary and their second COVID-19 vaccination. They have moved from their longtime home in Pasadena to Carpinteria, California. Chuck Shackelton ’63 and his wife, Mei Ling, celebrated their golden anniversary and their first vaccine shot.

A survivor of prostate, melanoma, and skin cancers, Chuck attended his 60th class reunion from Long Beach Poly and was delighted to see Billy from the Mouseketeers and Billy Jean King in attendance. As always, Chuck is very involved in his church. Steve Teele ’63 and his wife, Sue Stickney Teele ’64, have survived the pandemic wearing a mask and keeping socially distanced. Sue is an elder of her church, and Steve serves on the finance committee to stay busy. Zoom allowed a reunion of their Salzburg group. Diane Willis Yamagata ’63 welcomed her second grandson, Oliver, into the world on Jan. 9. He joins his older brother, Sebastian.

Chuck Wilke ’64 joined John Hintz ’64, Jim McElvany ’63, Dave Shikles ’63, and Tony Taylor ’63 to ride the Coachella Grande in Palm Springs in March. The Bulldog group has completed many rides together over the years.

COURTESY OF PAIGE SPEE FROM THE REV. HENRY DITTMAR ARCHIVE

HISTORY MYSTERY Rev. Henry Dittmar was a history professor at the U of R from 1948 to 1978; this is a photo of a Salzburg student dance in the 1960s from his archive. Can you spot yourself? Send information to Och Tamale, University of Redlands, 1200 E. Colton Ave., P.O. Box 3080, Redlands, CA 92373-0999 or email ochtamale@redlands.edu. In response to our photo from the archives on page 40 of the fall 2020 issue, Wally Pereira ’73 (Johnston) says, “That day has been very meaningful for me for the past 51 years. Oct. 15, 1969, was ‘The Moratorium to End the War in Vietnam.’ As I recall, this was the first anti-war demonstration at the U of R, and it was driven by those of us at Johnston College. “At Redlands we decided to march to the City Hall from campus. We organized to have marshals (the students with black armbands) to keep everyone together. At the City Hall, we stood on the steps and read the names of the fallen in Vietnam. Each of us who chose to read were given 15 minutes to read the names published in the Congressional Record. We read around the clock until we finished all of the near 40,000 names.

Anna Napoli remembers different aspects of that day; then a new professor at the University of Redlands and a six-week resident of Redlands,

DJ Jensen ’73 says, “The whole Moratorium movement was spearheaded by Sam Brown ’65. No rumbles downtown, but Redlanders definitely gave us dagger looks. On a personal note, the summer before I left home in Ventura my dad informed me, ‘If I ever see you in an anti-war march, I’m yanking you out of college!’ Thank Buddha, sleepy Redlands did not show up on any TV broadcasts!” COURTESY OF UNIVERSITY ARCHIVES

“My 15 minutes were some of the longest in my life. I left the stairs shaken. So many names were in the pages already read, and so many more to be read! From my experience, the demonstration was disciplined and well-managed by the marshals. I also recall it was peacefully received by the community of Redlands.”

she recalls signs on some Colton homes saying “Traitors” and men with old-style video cameras recording the group’s progress. “Word was that we’d all earned a place on President Richard Nixon’s ‘enemies list.’ I stood quietly in front of the rebuilt First Methodist Church until the group dispersed, then walked up Cajon Street to Professor Jay and Jane Roberts’ house where I hitched a ride home.”

Jim Allen ’65 escaped last fall to Washington for two weeks of photography, primarily in the Mount Rainier and Olympic national parks after months of COVID-19 hibernation. “It was the first time I have focused on photography as art, which opens a whole new world for me,” he reports. Jim stopped twice in Olympia, Washington, on his trip to eat pizza at Dirty Dave’s Pizza Parlor—the successor to the Gay 90s pizza place he frequented as a U of R student. The current menu includes Dave’s Special, Combination, and The Bulldog. Still delicious! Bill Bollinger ’65 swore he would never retire ever since starting his teaching career at California State Los Angeles in 1976, but COVID-19 changed his plans. “I love teaching in the classroom, but I wasn’t up for online.” Meanwhile, he was delighted to finally correspond with Janet Lamb Shikles ’64 to thank her for recruiting him in 1963 to go on the Fisk University exchange program. This experience set him on the road to becoming a historian. Sam Brown ’65 and his wife, Allison, continue to split their time between Key West, Florida, and Aspen, Colorado, where they have been heavily involved in the Aspen Music Festival. They are also building a family home in Minnesota, where they have strong family ties. They recently became grandparents for the third time but are desperately missing in-person time. Rita Cavin ’65 and her husband, Brooks, are staying put, Zooming with friends and family. She is painting in her studio, sketching, walking in the park, and being active in a book club. Patty Kelly Compeau ’65 is tutoring science on Zoom to several elementary and middle school students. She and her husband spent three weeks in New Zealand last spring and got the last flight home on March 21. Part of the time, they were with a friend who was lecturing on his book, A Lincoln. The lectures were titled “Lincoln and Leadership” and brought forth interesting discussion among the attendees about the different leadership styles in New Zealand and the United States. They have been able to take a few trips along the West Coast to see friends and family. They are also involved with social justice activities, doing what they can to follow Martin Luther King Jr.’s teachings about mutuality and reaching out to others. Fred Emmert ’65 continues to create spectacular aerial photos of the Southern California area, including amazing pictures of Redlands. See his work at airviews.com. Janet Putnam Kornmesser ’65 reports that virtual singing has become her favorite activity. It provides a way to connect with new friends and visit churches. Having moved to Tucson, Arizona, just as everything was shutting down for COVID-19 last spring, she continued to attend church and Sunday school in Bremerton, Washington, via Zoom. During the summer, she started singing virtually with her former choir in Redlands. She has recently connected with two more virtual choirs in Tucson-area churches. It makes for a busy Sunday but has been a wonderful way to keep up with old friends and make new friends. Jim Page ’65 and his wife, Barbara, have been enjoying their family and retirement in the Oro Valley area near Tucson, Arizona. Jim Allen ’65 and Sam Brown ’65 have visited and shared old times and stories with them over the last few years. Last fall, they watched wildfires on the