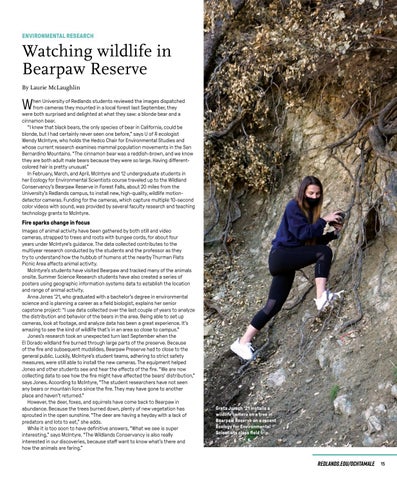 hen University of Redlands students reviewed the images dispatched from cameras they mounted in a local forest last September, they were both surprised and delighted at what they saw: a blonde bear and a cinnamon bear. “I knew that black bears, the only species of bear in California, could be blonde, but I had certainly never seen one before,” says U of R ecologist Wendy McIntyre, who holds the Hedco Chair for Environmental Studies and whose current research examines mammal population movements in the San Bernardino Mountains. “The cinnamon bear was a reddish-brown, and we know they are both adult male bears because they were so large. Having differentcolored hair is pretty unusual.” In February, March, and April, McIntyre and 12 undergraduate students in her Ecology for Environmental Scientists course traveled up to the Wildland Conservancy’s Bearpaw Reserve in Forest Falls, about 20 miles from the University’s Redlands campus, to install new, high-quality, wildlife motiondetector cameras. Funding for the cameras, which capture multiple 10-second color videos with sound, was provided by several faculty research and teaching technology grants to McIntyre.

Fire sparks change in focus Images of animal activity have been gathered by both still and video cameras, strapped to trees and roots with bungee cords, for about four years under McIntyre’s guidance. The data collected contributes to the multiyear research conducted by the students and the professor as they try to understand how the hubbub of humans at the nearby Thurman Flats Picnic Area affects animal activity. McIntyre’s students have visited Bearpaw and tracked many of the animals onsite. Summer Science Research students have also created a series of posters using geographic information systems data to establish the location and range of animal activity. Anna Jones ’21, who graduated with a bachelor’s degree in environmental science and is planning a career as a field biologist, explains her senior capstone project: “I use data collected over the last couple of years to analyze the distribution and behavior of the bears in the area. Being able to set up cameras, look at footage, and analyze data has been a great experience. It’s amazing to see the kind of wildlife that’s in an area so close to campus.” Jones’s research took an unexpected turn last September when the El Dorado wildland fire burned through large parts of the preserve. Because of the fire and subsequent mudslides, Bearpaw Preserve had to close to the general public. Luckily, McIntyre’s student teams, adhering to strict safety measures, were still able to install the new cameras. The equipment helped Jones and other students see and hear the effects of the fire. “We are now collecting data to see how the fire might have affected the bears’ distribution,” says Jones. According to McIntyre, “The student researchers have not seen any bears or mountain lions since the fire. They may have gone to another place and haven’t returned.” However, the deer, foxes, and squirrels have come back to Bearpaw in abundance. Because the trees burned down, plenty of new vegetation has sprouted in the open sunshine. “The deer are having a heyday with a lack of predators and lots to eat,” she adds. While it is too soon to have definitive answers, “What we see is super interesting,” says McIntyre. “The Wildlands Conservancy is also really interested in our discoveries, because staff want to know what’s there and how the animals are faring.”

Greta Jursch ’21 installs a wildlife camera on a tree in Bearpaw Reserve on a recent Ecology for Environmental Scientists class field trip.