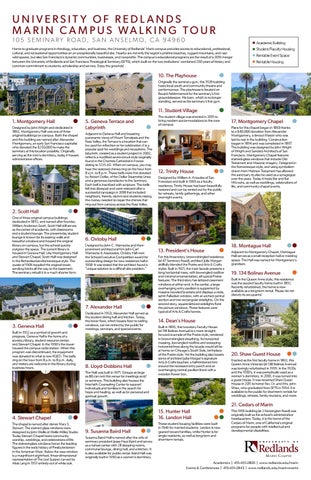 Home to graduate programs in theology, education, and business, the University of Redlands’ Marin campus provides access to educational, professional, cultural, and recreational opportunities on an exceptionally beautiful site. Nearby are not only the region’s pristine beaches, rugged mountains, and vast wild spaces, but also San Francisco’s dynamic communities, businesses, and nonprofits. The campus’s educational programs are the result of a 2019 merger between the University of Redlands and San Francisco Theological Seminary (SFTS), which built on the two institutions’ combined 250 years of history and common commitment to students, scholarship and service. Enjoy the grounds!

11. Student Village 1. Montgomery Hall Designed by John Wright and dedicated in 1892, Montgomery Hall was one of three original buildings on campus. Both the chapel and this building are named after Alexander Montgomery, an early San Francisco capitalist who donated the $250,000 to make the seminary at this location possible. Originally serving as the men’s dormitory, today it houses administrative offices.

5. Geneva Terrace and Labyrinth Adjacent to Geneva Hall and boasting panoramic views of Mount Tamalpais and the Ross Valley, the Terrace is a location that can be used for reflection or for celebration; it is a popular spot for weddings and receptions. The labyrinth, created as a student project in 2002, reflects a modified seven-circuit style originally found in the Chartres Cathedral in France dating to 1225 AD. When on campus, you may hear the restored chimes ring on the hour from 8 a.m. to 8 p.m. These bells were first donated by Robert Dollar, of the Dollar Steamship Lines and a generous benefactor to the Seminary. Each bell is inscribed with scripture. The bells fell into disrepair and were restored after a successful campaign in 2018 that included neighbors, friends, alumni and students raising the money needed to repair the chimes that ring out from campus across the Ross Valley.

The student village was erected in 2015 to bring modern accommodations to the core of campus.

12. Trinity House Designed by William A. Knowles of San Francisco and built in 1905 as a faculty residence, Trinity House has been beautifully restored and can be rented out by the public for retreats, family gatherings, and other overnight events.

17. Montgomery Chapel Plans for this chapel began in 1893 thanks to a $40,000 donation from Alexander Montgomery, a devout Mason who was laid to rest in the building. Construction began in 1894 and was completed in 1897. The building was designed by John Wright of Wright and Sanders Architects of San Francisco. Montgomery Chapel features stained-glass windows that include Old Testament and Masonic imagery. Designed in the Romanesque style, and using symbolism drawn from Hebrew Testament has allowed the sanctuary to also be used as a synagogue over the years. Today it hosts Bar and Bat Mitzvahs, as well as weddings, celebrations of life, and community chapel events.

2. Scott Hall One of three original campus buildings dedicated in 1892, and named after founder, William Anderson Scott, Scott Hall still serves as the center of academia, with classrooms and a student lounge. The present-day student lounge is known for its soaring walls and beautiful windows and housed the original library on campus, but the school quickly outgrew the space. The current library is housed in Geneva Hall. Like Montgomery Hall and Stewart Chapel, Scott Hall was designed in the Richardsonian-Romanesque style. The quake of 1906 toppled the original tower, sending bricks all the way to the basement. The seminary rebuilt it in a much shorter form.

3. Geneva Hall Built in 1952 as a symbol of growth and progress, Geneva Hall is the home of a six-story library, student resource center, and Stewart Chapel. In the 1950’s the tower housed the campus radio station. When this program was discontinued, the equipment was donated to what is now KQED. The bells ring on the hour from 8 a.m. to 8 p.m. daily, and visitors are welcome in the library during business hours.

Dedicated in 1953, Alexander Hall served as the student dining hall and kitchen. Today, the lower floor, which boasts floor to ceiling windows, can be rented by the public for meetings, seminars, and special events.

8. Lloyd-Dobbins Hall The Hall was built in 1971. Groups as large as 80 can rent this venue for meetings and/ or seminars. This building also houses the Interfaith Counseling Center to support individuals and families in the search for hope and healing, as well as for personal and spiritual growth.

13. President’s House For this three-story, brown-shingled residence (at 47 Seminary Road), architect Julia Morgan skillfully blended the Prairie and Arts &amp; Crafts styles. Built in 1921, the main facade presents a long horizontal mass, with low-angled roofline and minimal ornamentation; all typical Prairie features. The third story has latticed casement windows at either end; in the center, a large overhanging entry pavilion is supported by massive beveled brackets and displays a wide, set-in Palladian window, with an arched central section and two rectangular sidelights. On the second story, square-latticed sidelights flank the picture windows. These features were typical of Arts &amp; Crafts homes.

19. 134 Bolinas Avenue Built in the Queen Anne style, this residence was the second faculty home built in 1892. Recently refurbished, the home is now available as a long-term rental. Please do not disturb its occupants!

14. Dean’s House Built in 1895, this two-story Faculty House (at 118 Bolinas Avenue) is a more straightforward example of the Prairie style, rendered in brown-shingled sheathing. Its horizontal massing, low-angled roofline and sweeping horizontal lines along the facade would all be at home on Chicago’s South Side, birthplace of the Prairie style. Yet the building also boasts some of architect Julia Morgan’s signature Arts &amp; Crafts touches: a half-timbered trim around the recessed entry porch and an overhanging central pavilion lined with a wooden flower box.

20. Shaw Guest House Erected as the first faculty home in 1892, this Queen Anne Victorian (at 138 Bolinas Avenue) was lovingly refurbished in 1999. In the 1920s and the 1930’s, it was periodically used as a women’s dormitory. In 2001, it was turned into a guest house. It was renamed Shaw Guest House in 2011 to honor Rev. Dr. and Mrs. John Shaw, who graduated from SFTS in 1954. It is available to the public for short-term rentals for weddings, retreats, family reunions, and more.

4. Stewart Chapel The chapel is named after donor Mary S. Stewart. The stained glass windows were designed by John Wallis at Wallis Willey Studio Today Stewart Chapel hosts community worship, weddings, and celebrations of life. The stained-glass windows honor the leading figures in the early history of Presbyterianism in the American West. Below the rose window is a magnificent eight-foot, three-dimensional representation of The Last Supper, carved by Alois Lang in 1951 entirely out of white oak.

9. Susanna Baird Hall Susanna Baird Hall is named after the wife of seminary president Jesse Hays Baird and serves as a retreat center with 28 sleeping rooms, communal lounge, dining hall, and a kitchen. It is also available for public rental. Baird Hall was originally built in 1950 as a women’s dormitory.

These student housing facilities were built in 1946 for married students. Landon is now geared toward families, while Hunter is for single residents, as well as long-term and short-term rentals.

This 1956 building (at 2 Kensington Road) was originally built as the school’s administrative headquarters. Today, it is the home of the Cedars of Marin, one of California’s original programs for people with intellectual and developmental disabilities. 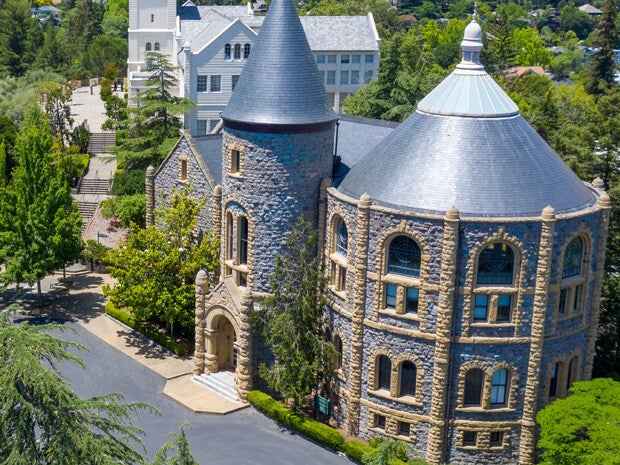