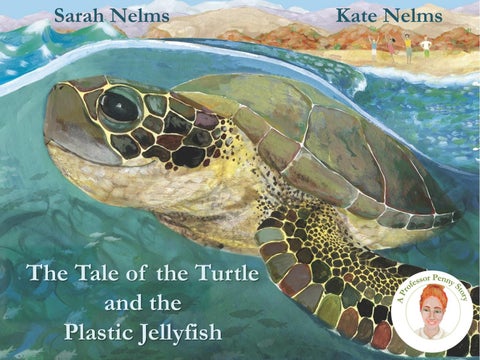 The Tale of the Turtle and the Plastic Jellyfish

The Sea, once it casts its spell, holds one in its net of wonder forever.

ÂŠ 2017 Text Sarah Nelms ÂŠ 2017 Illustrations Kate Nelms The right of Sarah Nelms and Kate Nelms to be identified as author and illustrator respectively of this work has been asserted by them in accordance with the Copyright, Designs and Patents Act 1988 This book has been typeset in Garamond All rights reserved. No part of this book may be reproduced, transmitted or stored in an information retrieval system in any form or by any means, graphic, electronic or mechanical, including photocopying, taping and recording, without prior written permission from the publisher.

Professor Penny Stories are a series of children’s books written by staff and students of the University of Exeter College of Life and Earth Sciences,

based in Penryn, Cornwall. Each with a unique style and appropriate for a range of ages, these stories bring scientific research and natural history to life, from conservation and animal behaviour to microbiology.

Look out for our favourite scientist, Professor Penny, in every story. With her faithful four-legged companion Wilson, she’ll help you understand the science behind the characters’ adventures.

Other stories in the Professor Penny series:

The Adventures of Flo, the Special Bacterium The Psyllid Who Wanted to Go Home Woolly’s Wonderful Wings

Nerin – whose name means ‘someone from the sea’ - was a turtle who lived in the open ocean.

Her big flippers and smooth shell meant she could glide effortlessly through the water.

This was a very good thing because she sometimes had to travel thousands of miles in search of her favourite food, jellyfish.

One day she came across a whole swarm of jellyfish, bobbing about in the water.

‘Yippee!’ She cried. ‘I’m so hungry I could eat them all!’. Nerin rushed towards them and started hoovering them up like jelly off a plate. In her haste, Nerin didn’t notice that one of the floating white blobs wasn’t a jellyfish at all but a plastic shopping bag, the kind you see at the supermarket. Someone must have dropped it in the sea by

But it was too late; Nerin had already slurped it up with the rest of the

‘Oh dear’, she groaned, ‘that last one didn’t taste very nice. Perhaps I’ve had enough for one day’.

knew the warmth of the sunshine would help her dinner go down. 4

A little while later Nerin began to feel unwell. Her tummy ached and she still felt very full.

‘Hmmm…maybe I ate more than I thought’, she pondered.

‘I must stop being so greedy’.

The plastic bag in her tummy made her feel full up and was stopping the food from being digested.

Over time she began to feel more and more poorly. She couldnâ&#x20AC;&#x2122;t eat and she was finding it difficult to swim.

One day a big storm came. She was so weak from not eating that her flippers werenâ&#x20AC;&#x2122;t strong enough to fight the swirling waves.

Eventually after drifting for a long time, she found herself somewhere very unfamiliar. She could hear the sea but couldn’t feel it. Instead she felt rough sand on her flippers and a gentle breeze on her face. When she opened her eyes she realised where she was. On land!

Without the water to support it, her body felt heavy. She tried to move her tired flippers but she was just too weak.

All of a sudden she heard a noise. It was a sort of snuffling that got louder, as if whatever was making it was moving closer.

Running towards her at full speed was a very loud white ball of fur. She didnâ&#x20AC;&#x2122;t know what to do.

She couldnâ&#x20AC;&#x2122;t move so had no way of escaping and instead shut her eyes tightly and waited for whatever it was to go away.

Wilson, on the other hand, had other ideas. On coming across Nerin

he started to spin in circles, chasing his tail, as if crazed with excitement.

‘Gazooks!’, the voice from before came again. ‘A turtle!’.

In all the mayhem, Nerin hadn’t noticed that Wilson had been joined by a girl who was now standing over her, her green eyes gleaming with curiosity but her face frowning with worry. 14

‘Hello little turtle’, the girl said. ‘What are you doing out here?’ She bent down and put a comforting hand on Nerin’s shell. ‘My friends call me Professor Penny. Don’t worry, I’m going to help you’. Before she knew it, Nerin was being lifted off the sand and carried up the beach away from the water. ‘Wait! You’re going the wrong way, the ocean’s that way!’ Nerin tried to say. But she was too tired and hungry to fight. Instead she drifted into a deep sleep. 16

When she woke up she found herself in a bright white room, surrounded by humans. At first she was scared but then saw Penny and knew that she was safe. ‘You’ve had a very rough time’ Penny said to Nerin.

‘That plastic bag you swallowed has made you very unwell indeed. Don’t worry, we’re going to do an operation to take it out’.

After her operation, Nerin started to feel much better. She began to eat again and even had the strength to swim in the pool. 17

While recovering at the hospital, she made some new friends.

There was Curtis, the sea lion - he got his head stuck in a fishing net and couldnâ&#x20AC;&#x2122;t get it off. Then there was Winnifred, the baby seagull. Her parents accidentally fed her a plastic bottle top thinking it was food. And lastly there was Sebastian, a dolphin whose tail got tangled up in

Thankfully, they were all now on the mend. 18

Although Nerin would be sad to leave her friends, she couldnâ&#x20AC;&#x2122;t wait to return home, back to the wide open ocean where she could glide through the water freely.

When the day finally came, she was so happy she could hardly contain her excitement. She flapped her flippers wildly as if warming up for her race down the beach to the shore.

A group of local school children came along to see her off and when she entered the water, they waved and cheered their goodbyes. Professor Penny and Wilson were there too, Pennyâ&#x20AC;&#x2122;s red hair blazing in the sunshine and Wilson barking excitedly. As Nerin happily felt the cool water slosh over her shell, she thought how lucky she had been to meet them. She would never forget their kindness. 20

How can you help?

Sarah is a University of Exeter PhD student based at Plymouth Marine Laboratory, researching the impacts of plastic on marine organisms. Her sister, Kate, is a self-employed childrenâ&#x20AC;&#x2122;s book illustrator. This book was originally produced as part of a Researcher-led Initiative, organised by Jenni Sanderson and funded by the University of Exeter Researcher Development Team. The

characters of Professor Penny and Wilson were developed by Nicole Bodey and Katie Cooke. With heartfelt thanks to Caitlin Kight for all her valuable support and wisdom.

Nerin is a sea turtle who loves eating jellyfish. One day, she accidentally eats a plastic bag which puts her in a spot of bother. Luckily, Professor Penny, along with her canine friend, Wilson, is on hand to save the day! The Tale of the Turtle and the Plastic Jellyfish, Sarah Nelms

Nerin is a sea turtle who loves eating jellyfish. One day, she accidentally eats a plastic bag which puts her in a spot of bother. Luckily,...

The Tale of the Turtle and the Plastic Jellyfish, Sarah Nelms

Nerin is a sea turtle who loves eating jellyfish. One day, she accidentally eats a plastic bag which puts her in a spot of bother. Luckily,...