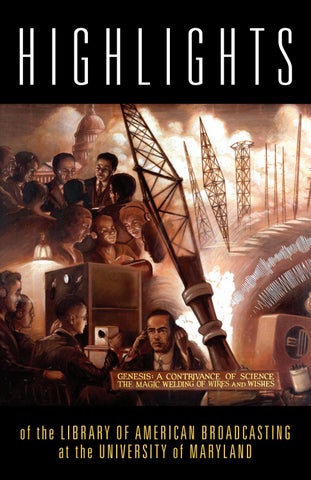 THE LIBRARY OF AMERICAN BROADCASTING is the preeminent national center for the preservation and dissemination of the history and tradition of broadcasting, reflecting its people, policies, programming and the indispensable part it plays in the nationâ&#x20AC;&#x2122;s culture. n In concert with the premier University that is our host and partner, the Library is the information portal of the radio and television broadcasting media, serving as the destination to which all broadcast professionals, the public, policymakers and the academic community can turn for a panoramic view of the field, from as far back to as far forward as we can see. n The LAB Foundation serves the purpose of supporting and growing the Library, promoting its assets and value, and guiding and advising our partners at the University of Maryland.

h ties -sighted individuals wit 1964, when some far rary Lib rs Since its founding in the Broadcast Pionee industry established rich to the broadcasting of the industry’s y for the various forms ings, as a central repositor phs, program record gra oto fessional papers, ph of ers rse history — scripts, pro mission of the ove like — it has been the ility ilab ava oral histories and the preservation and collection to insure its demic this ever-expanding cies: professional, aca uen gs to many constit of its extensive holdin blic. and the interested pu

NAB obtained space in the quickly and in 1972 it Space rs. The collection grew yea 20 for ed ain ngton DC, where it rem y’s headquarters in Washi rar Lib the 4 in 199 reased, however, and and funding needs inc h Special Collections wit ip rsh tne par a ished governing board establ ly named Library of ryland to house the new at the University of Ma e Park, MD. on its campus in Colleg American Broadcasting ies hts“ we introduce a ser edition of “LAB Highlig nts me ele With this inaugural s ng to light variou ion, periodically, to bri an where it is our intent h recognize that suc nging collection. We into of this rich and far-ra providing you a look in e scratch the surfac pire ins undertaking can only s on t such illustrati holdings, but hope tha er sid the LAB’s extensive con website and the Library’s extensive of ord you to look deeper via rec g this important ’s efforts in preservin supporting the LABF broadcasting history. r to feature our 25 yea thought it appropriate ose wh In this first essay we ut ho wit , ies Librar University of Maryland association with the ne of this good work no ise ert exp l ria l curato dedication and specia it and look forward to hope that you enjoy would be possible. We hearing from you. Cordially,

ors ndation Board of Direct

The Library of Ameri

FOR 25 YEARS the Library of American Broadcasting Foundation and the University of Maryland Libraries have worked together to collect and preserve the history of the radio and television industries of the United States.

The extensive Library of American Broadcasting collection contains historical documents, professional papers, oral histories, photographs, scripts, books, pamphlets, periodicals, and audiovisual materials relating to radio and television broadcasting in the United States. Our long-standing partnership has made it possible to document the impact of broadcasting in American culture, support scholars and historians whose work helps interpret it, and leverage digital technology to ensure the content remains accessible for years to come.

The Beginnings of Broadcasting In the first decades of the 20th century, radio technology was the domain of amateurs and experimenters who tinkered with homemade receivers in their garages and attics. In 1921, thirty broadcasting stations went on the air, including six owned by manufacturer Westinghouse and others operated by GE and RCA. From these early years, the Library of American Broadcasting has preserved photos, documents and radio verifications â&#x20AC;&#x201D; postcards and letters sent by radio stations to distant listeners upon request.

Early radio hardware was not very user-friendly, as these images from magazines and pamplets from the early 1920s illustrate. Early radio programming was intended to give listeners a reason to navigate the complexities of the equipment in order to tune in.

Right: These radio verifications, sent to listeners upon request, demonstrate the variety of businesses that started radio stations for the purpose of promoting their goods and services.

The Rise of Network Radio By the late 1920s, radio had transfixed the nation. NBC and CBS created a network of affiliates across the country. Millions listened to radio coverage of history-making events such as Lindberghâ&#x20AC;&#x2122;s solo flight and boxer Joe Louisâ&#x20AC;&#x2122; victory against Max Schmeling. During the Great Depression, Americans found entertainment in variety shows with well-known comedians and distraction in popular serial dramas. The Library of American Broadcasting Collection contains original scripts from this era such as Fibber McGee & Molly, Portia Faces Life, Heart of Julia Blake and Quiet, Please.

Easier-to-use radios designed to complement the rest of the furniture in the home allowed families to listen to President Roosevelt or serials like The Shadow during the Great Depression.

Scripts of Quiet Please written by Wyllis Cooper are among the many script collections at the LAB.

Radio Goes to War During the Second World War, radio played a vital role of entertaining families on the homefront, encouraging their participation in the war effort, and informing them about the progress of the war. Radio also entertained servicemen overseas and the Library of American Broadcasting has preserved original transcription disc recordings of popular programs sent to servicemen through the Armed Forces Radio Service and Voice of America.

Vox Pop traveled around the country interviewing servicemen and civilians about their experiences in the war effort. The papers of Vox Pop host Parks Johnson are housed at the LAB, as well as materials related to the wartime work of Edward R. Murrow, Kate Smith, and local stations like WDZ (Tuscola, IL).

Transition to Television Radio networks began experimenting with television in the early 1930s. RCA introduced the new medium to the nation at the 1939 Worldâ&#x20AC;&#x2122;s Fair. The presidential inaugural was first televised in 1949. And

Below: An early television commercial for Old Gold Cigarettes Tobacco companies took advantage of the visual qualities of the new medium. Right: Arthur Godfrey was one of the entertainers who made a successful transition from radio to television.

by 1954 the revenue for television surpassed that of radio. The rapid rise of television is documented in Industry magazines like Sponsor, Television Digest, and Television Age in the collection.

Television and News While radio remained popular, by the early 1950s television changed how Americans consumed news and entertainment. NBC launched the Today show in 1952; CBS and NBC expanded evening newscasts from 15 minutes to half an hour in 1963. The papers of renowned journalists Howard K. Smith, Ray Scherer and Deena Clark are housed here, as well as the Don West Broadcasting & Cable Photo Archive, which includes many photographs of early television journalists and news programs.

Magazines like Electronic Age informed viewers about new technologies such as color TV in this 1959 issue.

Above: The Library of American Broadcastingâ&#x20AC;&#x2122;s collections include the papers of journalist, radio reporter and television anchor Howard K. Smith (left) and NBC White House correspondent Ray Scherer (right). Left: Dave Garroway was the original host of the Today show.

Authors Stanley Cloud and Lynne Olson used our archives in researching their book, The Murrow Boys.

Preserving the Collections and Supporting Research Time conspires against archival materials despite the best efforts to protect them. The biggest threat of loss lies within the audiovisual materials. All legacy formats are at risk due to factors such as “sticky-shed syndrome,” a condition caused by the deterioration of the glue that holds the magnetized coating to the plastic tape, and “vinegar syndrome” which similarly affects cellulose film, causing it to become brittle. Digitizing these materials not only preserves the content but also makes them accessible to researchers all over the world. The men and women who use these collections come from a variety of disciplines and include college students, Ph.D. candidates, professional historians, documentary filmmakers, and podcasters. Significant works that have used these collections include the book The Murrow Boys, the television series Mad Men, and the motion picture Good Night, and Good Luck. 14

The Arthur Godfrey Collection includes hundreds of recordings of his radio and television programs â&#x20AC;&#x201C; many of them on spools of wire. A now obsolete format,these magnetic recordings made on thin steel wire date from the 1940s. Many of these have already been digitized and are available online.

About the Library of American Broadcasting at the University of Maryland Members of the broadcast industry who understood the historical relevance of radio and television in American culture initiated the Broadcast Pioneers History Project in 1964 as a means to preserve their industry. The project — which was in effect a library, with staff and collections – occupied space at the National Association of Broadcasters building in downtown Washington, D.C. in 1972. As the library grew over the next twenty years, space and funding became increasingly scarce. The Library’s governing board established a partnership with Special Collections at the University of Maryland Libraries and in October of 1994 the collection, now called the Library of American Broadcasting, moved to its permanent location in College Park, Maryland. 16

With more than 1,000 oral histories, 200,000 photographs and thousands of books, pamphlets, scripts, audiovisual recordings and other materials, this collection has an international reputation as one of the leading archives of broadcast history. Today, the Library of American Broadcasting Foundation continues to support the preservation and growth of the collection, including digitization efforts. Distinctive collections like the Library of American Broadcasting distinguish the University of Maryland as a destination for researchers, faculty, students and the general public. Libraries are increasingly defined by the services they offer to make their collections useful to students and scholars, and the University libraries embrace technology and innovation to achieve these goals. 17

Help Us Preserve and Expand This History Help The Library of American Broadcasting preserve and make accessible to all the historical record of radio and television — from as far back as we can reach to as far forward as we can see. As we build the necessary resources to support this collection, we need your support. As custodian of the Library of American Broadcasting materials, the University of Maryland receives thousands of requests each year for information from journalists, doctoral students, and documentarians researching a range of topics relating to broadcasting’s history and future, the impact of broadcasting, and the way America has been reflected in the broadcast media. It is clear that valuable research is being done with these materials. The current state of affairs in broadcasting, journalism, and media has created an increased interest in this area. With increased staffing, accessibility of more materials, and marketing the collection to scholars, educators, and researchers, the collection will continue to attract national and international acclaim. It is critical that we build an endowment that supports the preservation of the legacy of broadcasting while creating more online access to the materials that support research, teaching, and public debate. There are many ways in which you can support this collection, whether it’s an outright cash gift, appreciated stocks and investments, or through estate plans. If you would like to make a gift in any form, please contact LABF Development Officer Sally Brown at sallybrownLABF@gmail.com.

We are also very interested in donations of additional materials about broadcast history. If you have materials you would like to donate, please contact Doug McElrath at dmcelrat@umd.edu. Gifts in support of the Library of American Broadcasting Foundation, a 501(c)(3) organization authorized by its board, are tax deductible as allowed by law. See your tax adviser for details.

The Television Information Office (1959-1989) was created to favorably promote all aspects of television. The organizationâ&#x20AC;&#x2122;s papers are housed at the University of Maryland, including this poster in defense of broadcast journalism. 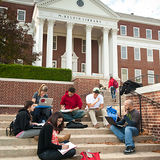