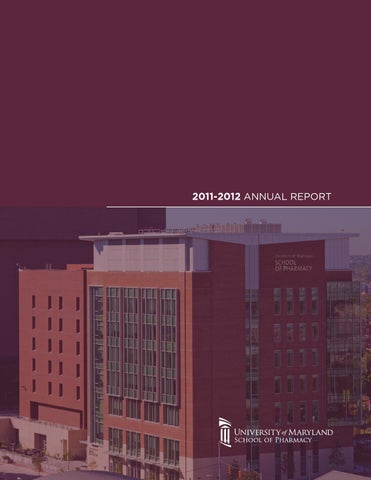 and marketing, student affairs, and

With undergraduate degree or higher

Ethnicity across all four years:

Job Placements for the Class of 2012

SOURCES OF OPERATING REVENUES SUPPORTING THE SCHOOL This report is an unaudited presentation of revenues supporting the School. Gifts $2,265,341

Amanda Oglesby-Sherrouse, PhD Assistant Professor, Department of Pharmaceutical Sciences Oglesby-Sherrouse obtained her BS and PhD degrees in microbiology from the University of Texas at Austin and subsequently performed postdoctoral studies at the University of Colorado School of Medicine in Denver. Her research focuses on iron regulation in bacterial pathogens, particularly how iron affects cell physiology and expression of virulence factors. She is the recipient of a very competitive K22 Research Scholar Development Award from the National Institutes of Health titled “Mechanism of heme regulation of a P. aeruginosa non-coding RNA.”

Tim Rocafort, PharmD Assistant Professor, Department of Pharmacy Practice and Science Rocafort received his Doctor of Pharmacy degree from the Ernest Mario School of Pharmacy at Rutgers, the State University of New Jersey. He completed a community pharmacy practice residency at Dominick’s Pharmacy in conjunction with the University of Illinois at Chicago (UIC) and completed a PGY1 resident teaching certificate program at UIC’s College of Pharmacy. Rocafort worked as a pharmacy intern and then as a pharmacist at CVS in New Jersey. He practices at Johns Hopkins Outpatient Pharmacy.

Quality of Care: The Impact of Multi- disciplinary Care on Processes and Outcomes of Cancer Care

Peer to Peer Approach for the Management of Diabetes

Agency for Healthcare Research and Quality

Quality of Medication Use in Long- Term Care Facilities

Ilene Zuckerman Professor and Chair Impact of ICU Best Practices on Mortality & Length of Stay; Effect of Etomidate on ICU Mortality in Sepsis

Surveillance of the RADARS Systems by Poison Control Centers: A Pilot Program

Modeling of Disease Markers Over Time in Patients with Hyperhidrosis

Spray Coating of Aquacoat ECD: The Application of QbD (Quality by Design) Principles

Development of a Spectral Database for Excipients, Drug Substances, and Drug Products

Mechanism of Heme Regulation of a P. aeruginosa Non-Coding RNA

Development of Biorelevant System for In Vivo Prediction

National Institute of Diabetes and $319,642 Digestive and Kidney Diseases

National Institute of Diabetes and $312,407 Digestive and Kidney Diseases

National Institute of Diabetes and $717,613 Digestive and Kidney Diseases

Exploring the Role of HINT1 Protein in Neuronal Function

Development of I-THP as New Medication for Drug Addiction

Developing the Scientific Basis for the U.S. Pharmacopeia Application of Spectroscopic and Chemometric Methods to Excipient Identification and Adulteration Detection

Loyal donors provide the foundation for the School of Pharmacy’s success. Thank you to everyone—our alumni, faculty, staff, and friends—who has invested in the University of Maryland School of Pharmacy. LEGACY COUNCIL The Legacy Council of the University of Maryland acknowledges those who have made generous contributions to the School of Pharmacy through their estate plans. Anyone who has made such a gift is eligible for membership in the Legacy Council. To qualify, simply provide the School of Pharmacy’s Office of Development and Alumni Affairs with documentation of the gift or a copy of the relevant document in which the School is named as a beneficiary (www.umaryland.edu/plannedgiving). For additional information about membership in the Legacy Council and estate planning, please contact Janice Batzold, MS, acting executive director of development and alumni affairs, at 410-706-1711 or at jbatzold@ rx.umaryland.edu. Members of the Legacy Council are: John H. Balch, BSP ’68 Estate of Evelyn Grollman Glick Gwynne L. Horwits Leonard Horwits, BSP ’60 Bernard Lamy Gregory Lukaszczyk, BSP ’84

♦ This core group of philanthropists has inspired other donors to follow their lead. Today DSA membership has grown to create a solid base of private support for the School’s efforts to advance pharmaceutical education, practice, and science. To join this prestigious group of alumni and friends, or for more information on giving to the School, please contact Janice Batzold, MS, acting executive director of development and alumni affairs, at 410-706-1711 or at jbatzold@rx.umaryland.edu.

The University of Maryland School of Pharmacy appreciates the financial support of the following individuals and organizations during the period July 1, 2011, to June 30, 2012: GIVING BY INDIVIDUALS

to student organizations to enrich the student experience and enhance ongoing professional development. Catonsville Pharmacy, LLC CVS Caremark Corp. Jay’s Catering MedStar Health Omnicare Shoppers Pharmacy Walgreens Co. Wedgewood Club IN MEMORY Irvin M. Pruce, BSP ’49 Thomas G. Williams Sr., BSP ’80, PharmD ’99 Evelyn L. Yevzeroff, BSP ’43 IN HONOR Melissa Kim, PharmD ’12 David A. Knapp This is a listing of gifts received from July 1, 2011, to June 30, 2012. We have made every effort to provide a complete and accurate listing of donors and gifts. If we have made an error or omission, please accept our sincere apology and contact Janice Batzold, MS, acting executive director of development and alumni affairs, at 410-706-1711 or jbatzold@rx.umaryland. edu so that we may correct our records. University of Maryland School of Pharmacy