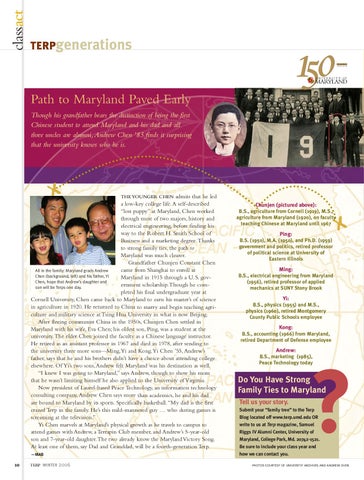 Path to Maryland Paved Early Though his grandfather bears the distinction of being the first Chinese student to attend Maryland and his dad and all three uncles are alumni, Andrew Chen ’85 finds it surprising that the university knows who he is.

THE YOUNGER CHEN admits that he led

a low-key college life. A self-described “lost puppy” at Maryland, Chen worked through most of two majors, history and electrical engineering, before finding his way to the Robert H. Smith School of Business and a marketing degree.Thanks to strong family ties, the path to Maryland was much clearer. Grandfather Chunjen Constant Chen came from Shanghai to enroll at All in the family: Maryland grads Andrew Chen (background, left) and his father, Yi Maryland in 1915 through a U. S. govChen, hope that Andrew’s daughter and ernment scholarship.Though he comson will be Terps one day. pleted his final undergraduate year at Cornell University, Chen came back to Maryland to earn his master’s of science in agriculture in 1920. He returned to China to marry and begin teaching agriculture and military science at Tsing Hua University in what is now Beijing. After fleeing communist China in the 1950s, Chunjen Chen settled in Maryland with his wife, Eva Chen; his oldest son, Ping, was a student at the university.The elder Chen joined the faculty as a Chinese language instructor. He retired as an assistant professor in 1967 and died in 1978, after sending to the university three more sons—Ming,Yi and Kong.Yi Chen ’55, Andrew’s father, says that he and his brothers didn’t have a choice about attending college elsewhere. Of Yi’s two sons, Andrew felt Maryland was his destination as well. “I knew I was going to Maryland,” says Andrew, though to show his mom that he wasn’t limiting himself he also applied to the University of Virginia. Now president of Laurel-based Peace Technology, an information technology consulting company, Andrew Chen says more than academics, he and his dad are bound to Maryland by its sports. Specifically basketball. “My dad is the first crazed Terp in the family. He’s this mild-mannered guy … who during games is screaming at the television.” Yi Chen marvels at Maryland’s physical growth as he travels to campus to attend games with Andrew, a Terrapin Club member, and Andrew’s 5-year-old son and 7-year-old daughter.The two already know the Maryland Victory Song. At least one of them, say Dad and Granddad, will be a fourth-generation Terp. —MAB

Do You Have Strong Family Ties to Maryland Tell us your story.

Submit your “family tree” to the Terp Blog located off www.terp.umd.edu OR write to us at Terp magazine, Samuel Riggs IV Alumni Center, University of Maryland, College Park, Md. 20742-1521. Be sure to include your class year and how we can contact you. 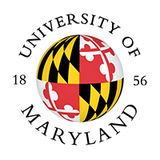