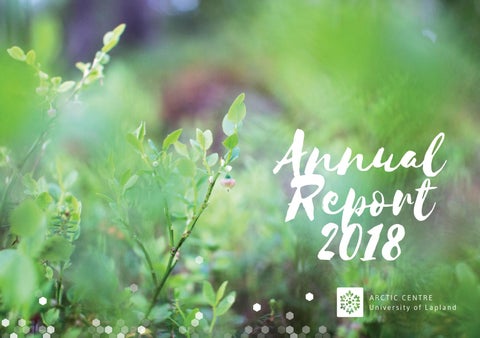 Arktikum’s library was opened in new premises on 5 June 2018. Arctic Café about the Arctic Council was part of the opening ceremony programme. | photo johanna westerlund

Contents From the Director

Around 4 100 people visited in the Arctic Market Days on 14–16 December 2018. At the market, over 80 vendors presented local arts, handicrafts and food. | photo iida kutuniva

From the Director In 2018, climate change has risen more

Independence Day Reception was the real recognition strongly to discussions than ever before. Young people of our long-term work at the Arctic Centre. around the globe have begun to demand concrete Year 2018 has also been the year of Finland’s actions to prevent climate change. In October, the Chairmanship of the Arctic Council (2017-2019). IPCC published the Global Warming of 1.5 °C report Lapland has been a location for several meetings and the message was clear: we have to act now! and the Lapland Arctic Council Host Committee, We share the same worries. coordinated by the Arctic Centre, One recent study shows that new, has been hosting the guests The Science Centre is an taller plant species have been together with the Foreign Ministry. important window to the slowly taking over the Arctic tundra. To support the chairmanship, our changing Arctic for many Another one shows that winters researchers have been producing with basal ice are experienced knowledge and information to visitors from abroad. more often than before. The third our foreign ministry’s Arctic team, suggests targeted engineering other ministries and agencies. projects to hold off glacier melting to slow down the The tourism boom in Lapland still goes on and, collapse of ice sheets and limit sea-level rise. once again, Arktikum had a record number of Our work on climate issues has been noted also by visitors. The Science Centre is an important window President Sauli Niinistö, who visited the Arctic Centre to the changing Arctic for many visitors from abroad. in October to discuss the climate change research. However, tourists are not the only one who come to This meeting with the invitation to the President’s us to learn: a record number of pupils took part in

the learning paths and workshops in the Arktikum Science Centre. In 2018, some big projects ended. In November, we had the last Arctic Fury Film Festival, which we have organized since 1998. In addition, three Finnish Academy funded projects published their final conclusions: HuSArctic, Arctic Ark and Humanor. At the same time, we had a chance to strengthen our expertise for example in China research and the new three-year Finnish Academy funded research project WOLLIE about the attractiveness of Arctic industrial cities among young people started. With respect to scientific publications, the year 2018 was extremely productive: Arctic Centre made its all-time record for the number of scientific publications. I want to thank every staff member of the Arctic Centre and our partners for making this all happen. Looking forward to the new inspiring year 2019!

*Does not include costs of premises and other general expenses

School co-operation ▪▪ Around 2860 children took part in learning paths and workshops in Arktikum. The biggest event was Science Week in September with 1920 pupils. The event was organized together LUMA Centre Lapland.

During the Science Week in September 2018, 1920 schoolchildren learned about Arctic animals and nature, climate change and space by using methods such as programming, chemistry, art and drama. | photo johanna westerlund

▪▪ In 2018, around 230 teacher students participated in the activities as part of their university studies.

The “Staging Sámi in the City” exhibition by Tanja Joona and Joonas Vola presented photographic illustrations to interpret Sámihood in urban space. The exhibition was presented in Gallery Kopio in the University of Lapland and it provided illustrative material to the NUORGÀV research project. | photo joonas vola ARCTIC CENTRE ANNUAL REPORT 2018

Markku Heikkilä presented The Beginning of the Arctic Era Exhibition for the Arctic Environment Ministers who had a meeting in Rovaniemi in October 2018 as part of Finland’s Chairmanship of the Arctic Council. | photo kaisa sirén

▪▪ ECOHUCY CONFERENCE ON DIGITALISATION AND CYBERSECURITY IN THE NORTH 24.5.2018

▪▪ THE CHALLENGES AND GOALS OF EDUCATIONAL ENVIRONMENT OF IMMIGRANT YOUTH National roundtable of the Sirius network 6.9.2018 ▪▪ ROVANIEMI DAY &amp; SAHANPERÄN SAVOTTA Open doors in Arktikum 9.9.2018 ▪▪ OPENING OF THE HONORARY VICE-CONSULATE OF ITALY 21.9.2018 ▪▪ SCIENCE WEEK Workshops and lectures for children in schools and kindergartens 17.–21.9.2018 ▪▪ ELMER ICE TRAINING COURSE FOR BEGINNERS 22.–23.10.2018

▪▪ NORDIC INTERNATIONAL GLACIOLOGY SOCIETY (IGS) MEETING 23.–25.10.2018 ▪▪ STOPPING THE FLOOD – CAN WE ENGINEER ICE SHEETS AND SAVE THE HOMES OF A BILLION PEOPLE? Public Lecture of John C. Moore 24.10.2018 ▪▪ FINAL SEMINAR OF THE HUSARCTIC PROJECT Helsinki 23.–27.10.2018 The Honorary Vice-Consulate of Italy in Finnish Lapland opened in Arktikum in September 2018. Senior Researcher Nuccio Mazzullo was appointed as Honorary Vice-Consul of Italy in August 2016. | photo johanna westerlund

During the Bring Your Child to Work Day in November 2018, the children of our employees got to know Northern Finncattle and other Arctic animals. | photo johanna westerlund 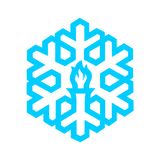