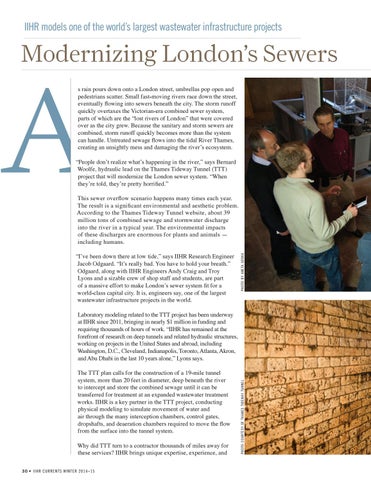 IIHR models one of the world’s largest wastewater infrastructure projects

s rain pours down onto a London street, umbrellas pop open and pedestrians scatter. Small fast-moving rivers race down the street, eventually flowing into sewers beneath the city. The storm runoff quickly overtaxes the Victorian-era combined sewer system, parts of which are the “lost rivers of London” that were covered over as the city grew. Because the sanitary and storm sewers are combined, storm runoff quickly becomes more than the system can handle. Untreated sewage flows into the tidal River Thames, creating an unsightly mess and damaging the river’s ecosystem.

“I’ve been down there at low tide,” says IIHR Research Engineer Jacob Odgaard. “It’s really bad. You have to hold your breath.” Odgaard, along with IIHR Engineers Andy Craig and Troy Lyons and a sizable crew of shop staff and students, are part of a massive effort to make London’s sewer system fit for a world-class capital city. It is, engineers say, one of the largest wastewater infrastructure projects in the world.

This sewer overflow scenario happens many times each year. The result is a significant environmental and aesthetic problem. According to the Thames Tideway Tunnel website, about 39 million tons of combined sewage and stormwater discharge into the river in a typical year. The environmental impacts of these discharges are enormous for plants and animals — including humans.

The TTT plan calls for the construction of a 19-mile tunnel system, more than 20 feet in diameter, deep beneath the river to intercept and store the combined sewage until it can be transferred for treatment at an expanded wastewater treatment works. IIHR is a key partner in the TTT project, conducting physical modeling to simulate movement of water and air through the many interception chambers, control gates, dropshafts, and deaeration chambers required to move the flow from the surface into the tunnel system. Why did TTT turn to a contractor thousands of miles away for these services? IIHR brings unique expertise, experience, and 30 • IIH R C u rre nts W int e r 2014–15

Laboratory modeling related to the TTT project has been underway at IIHR since 2011, bringing in nearly $1 million in funding and requiring thousands of hours of work. “IIHR has remained at the forefront of research on deep tunnels and related hydraulic structures, working on projects in the United States and abroad, including Washington, D.C., Cleveland, Indianapolis, Toronto, Atlanta, Akron, and Abu Dhabi in the last 10 years alone,” Lyons says.