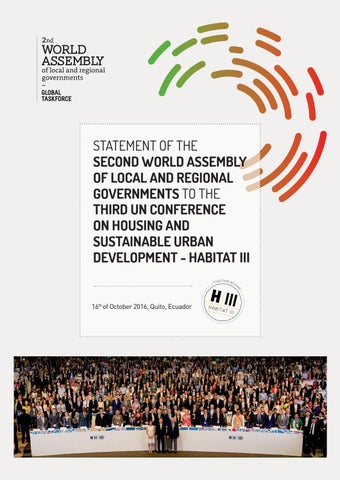 First panel on the local and regional governments’ commitments

5. The Quito Declaration’s recognition that the New Urban Agenda must contribute to the implementation and localization of the 2030 Agenda for Sustainable Development in an integrated manner, and to the achievement of the Sustainable Development Goals (SDGs) and targets, including SDG 11 of making cities and human settlements inclusive, safe, resilient, and sustainable, in paragraph 9. 6. The landmark inclusion of a reference to the Right to the City as part of a shared vision of “cities for all” in paragraph 11 of the Quito Declaration, as well as the recognition of many of the core principles of the Right to the City in the text. 7.

The commitment of Member States to ensure appropriate fiscal, political and administrative decentralization based on the principle of subsidiarity in paragraph 89.

Second panel on the local and regional governmentsâ&#x20AC;&#x2122; commitments

COMMIT TO: 1. Lead local action for global sustainability by localizing international policy agendas and working to raise awareness of, implement and monitor the New Urban Agenda, the SDGs, and other global agendas in our cities and territories. 2. Adopt an integrated territorial approach to sustainable development that recognizes the continuum of urban-rural linkages and promotes territorial cohesion. 3. Govern in partnership, working towards the effective guarantee of the Right to the City for all in our cities and territories, ensuring the right to housing and sharing and protecting the commons. 4. Foster inclusive economic development and decent jobs with a particular emphasis on the social and solidarity economies. 5.

Move towards sustainable production and consumption patterns, including the circular economy, and act to mitigate and adapt to climate change and reduce disaster risks.

6. Empower citizens, particularly women, to fully participate in local political, social, economic and cultural life to promote the co-creation of cities and territories by all who live in them. 7.

8. Integrate culture as the fourth pillar of sustainable development and take action to foster heritage, creativity, diversity and peaceful co-existence. 9. Increase the transparency and accountability of local and regional institutions to strengthen local democracy. 10. Build solidarity between cities and territories and enhance inter-municipal cooperation.

Third panel on the local and regional governmentsâ&#x20AC;&#x2122; commitments

11. Collaborate internationally through decentralized development cooperation and peer-to-peer learning to share experiences of how to promote sustainable development. 12. Work to clarify the modalities of the World Assembly of Local and Regional Governments in order to ensure our effective engagement in the implementation and follow up of the New Urban Agenda.

CALL ON THE INTERNATIONAL COMMUNITY TO: 1. Embark on a new era of partnership in global governance and renew the relationship between local and regional governments and the UN to include the structural consultation of our constituency. 2. Link up the implementation and follow-up of all global sustainability agendas at global, national and local level, including the SDGs, the Paris Climate Agreement, the Sendai Framework, the Addis Ababa Agenda and the New Urban Agenda. 3. Dramatically improve municipal infrastructure finance by creating an enabling environment at global and national levels with new public and private financing instruments, including a global fund for infrastructures, basic services and housing, city-responsive development banks, direct access for subnational governments to climate finance, increased powers for cities to control finance, and vertical alignment policyplanning among levels of government. Create a Global Partnership for Localizing Finance to act as a multi-stakeholder and multilevel umbrella coalition fostering dedicated programs and funding lines for local and regional governments. 4. Recognize the need for the World Assembly of Local and Regional Governments to become a significant and representative mechanism through which local and regional governments can provide political guidance and technical follow-up on the global sustainability agenda.